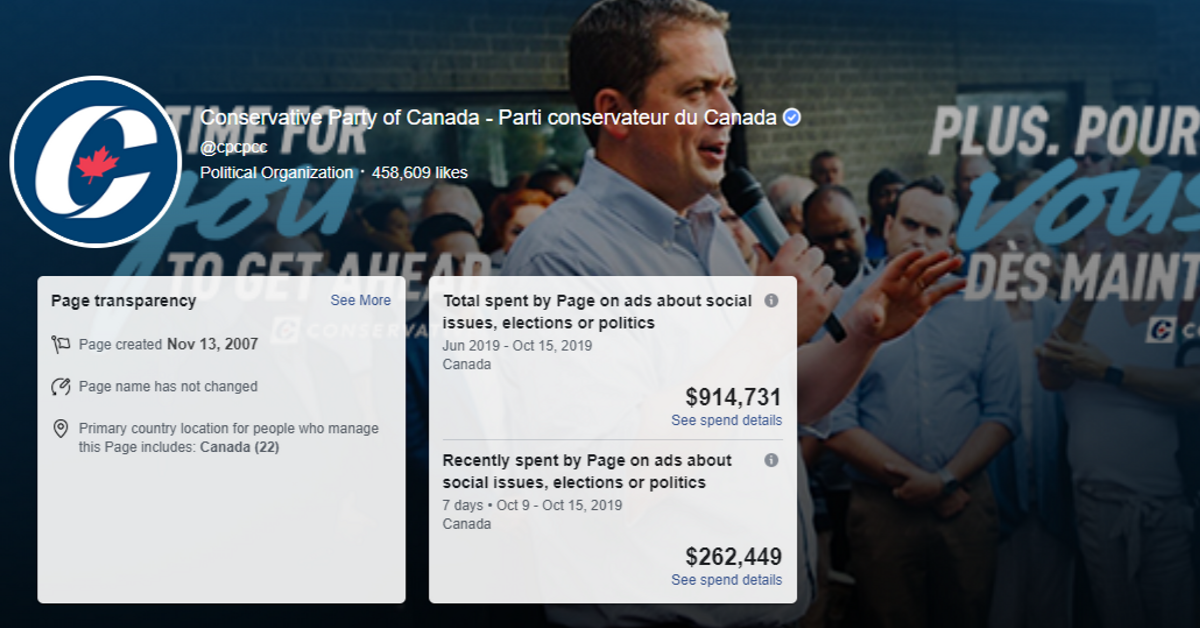 The Conservatives, Liberals and NDP have all drastically increased their Facebook ad spending as we approach election day.

Find out how much all of the major parties are spending, and how they are choosing to spend their advertising budgets - read on below!

The Ad Spend Breakdown: Since June, 2019

The Ad Spend Breakdown: The past 7 days 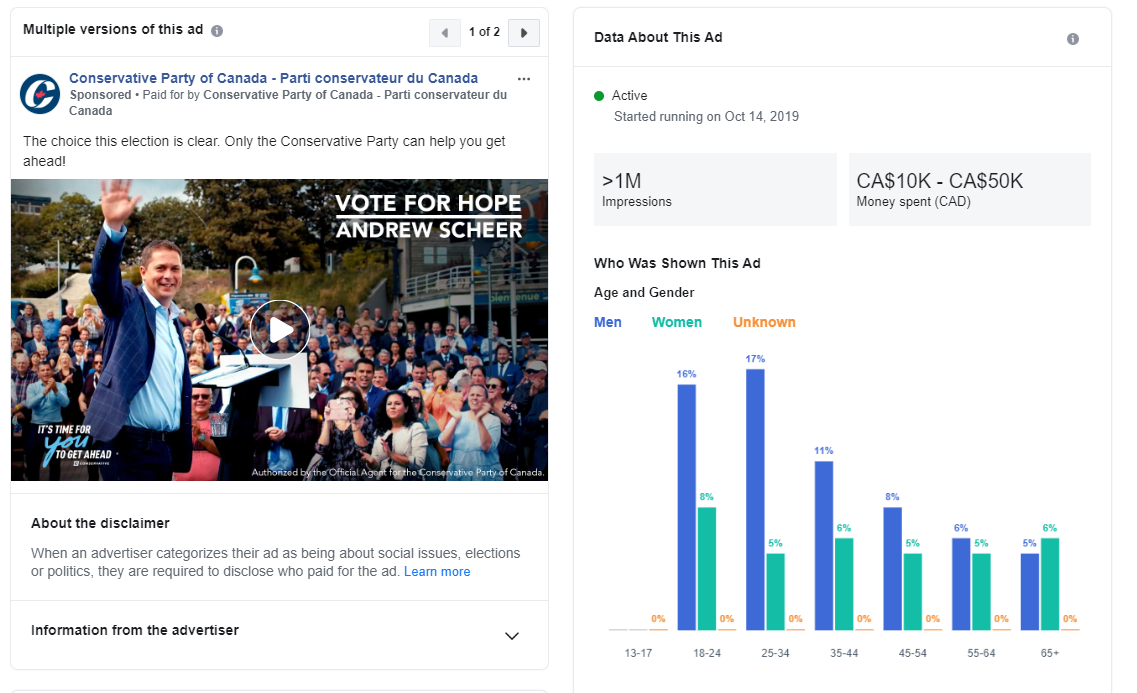 The Conservatives are spending big on Facebook ads this week. This is the ad that they are currently spending the most money on.

They have spent somewhere between $10-50,000 promoting this ad alone.

The ad is a 30 second video clip focused on saving money for Canadian taxpayers. It paints a simple picture - pay more if the Liberals are elected. Pay less if the Conservatives are elected.

The ad ends with the Conservative slogan "It's time for you to get ahead". 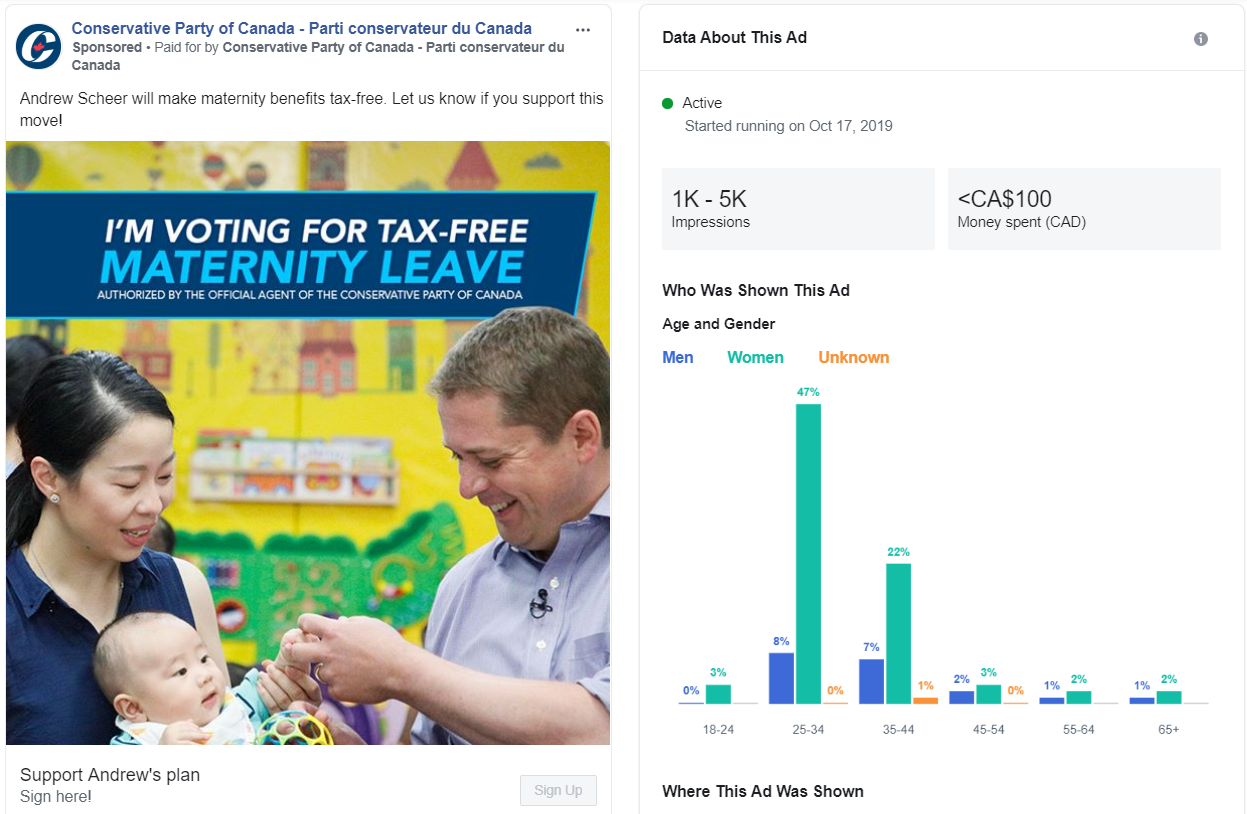 This is one of the few Conservative ads that has specifically targeted female voters. As you can see, the ad has predominantly been shown to females between 25-44 years old.

The Conservatives are clearly hoping their plan for a tax-free maternity leave will earn them more female voters. 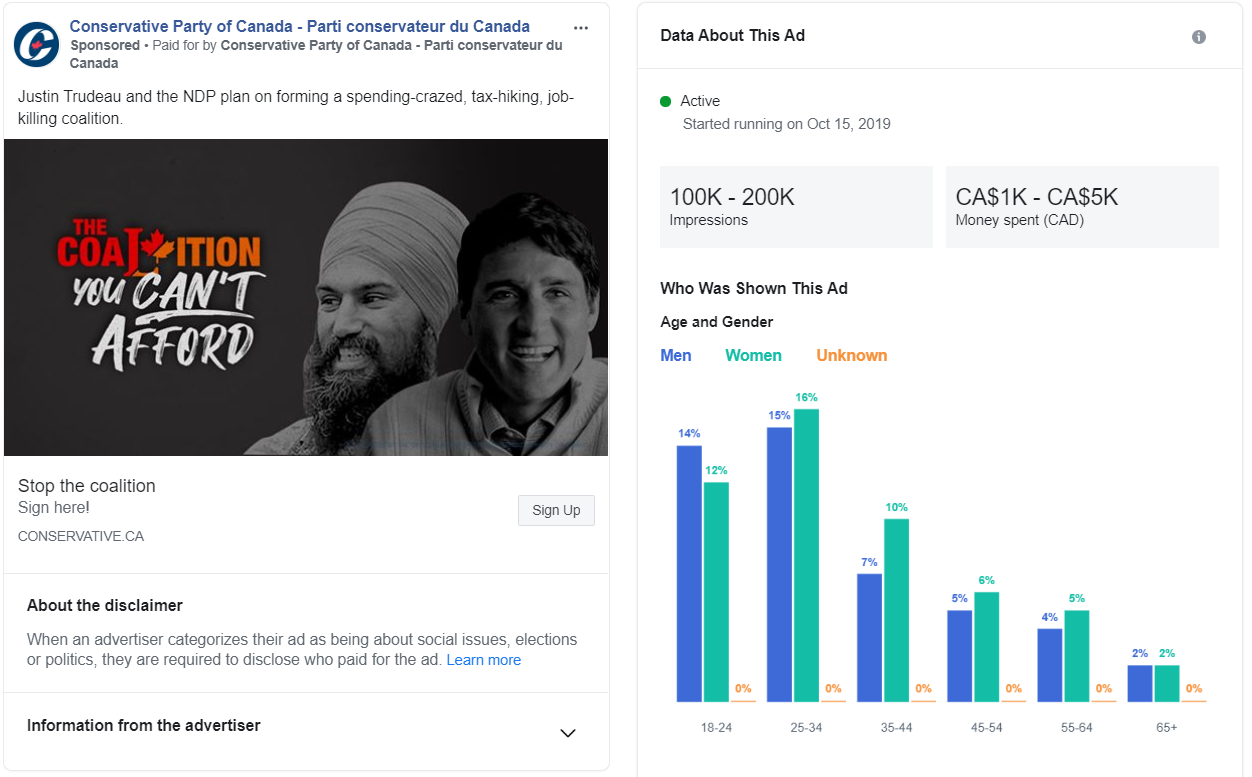 They are sticking to the same messaging they've used against Justin Trudeau and the Liberal Party - if you don't vote Conservative, you will end up spending more money, and deficits will continue to rise.

When taking the pages of party leaders into account, the Liberals have spent more than any other party on Facebook advertising in the run up to the October 21 election.

In addition to their big ad spend, the Liberals have also run the most sophisticated campaign with the most variations on ad copy and targeting. 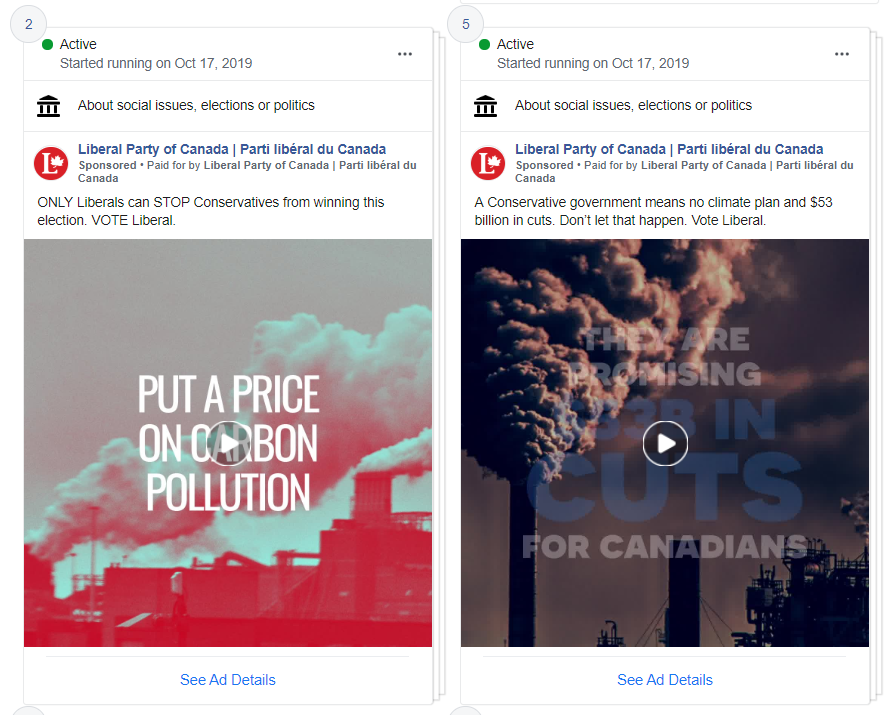 The Liberal Party of Canada is currently running far more ad variations than any other party.

One of the most prevalent topics in their advertisements is the environment.

The Liberals are running a variety of short video ads that present voters with a direct choice - vote for Andrew Scheer, who plans to rip up the Liberal climate plan, or vote for Justin Trudeau and stop Conservative cuts. 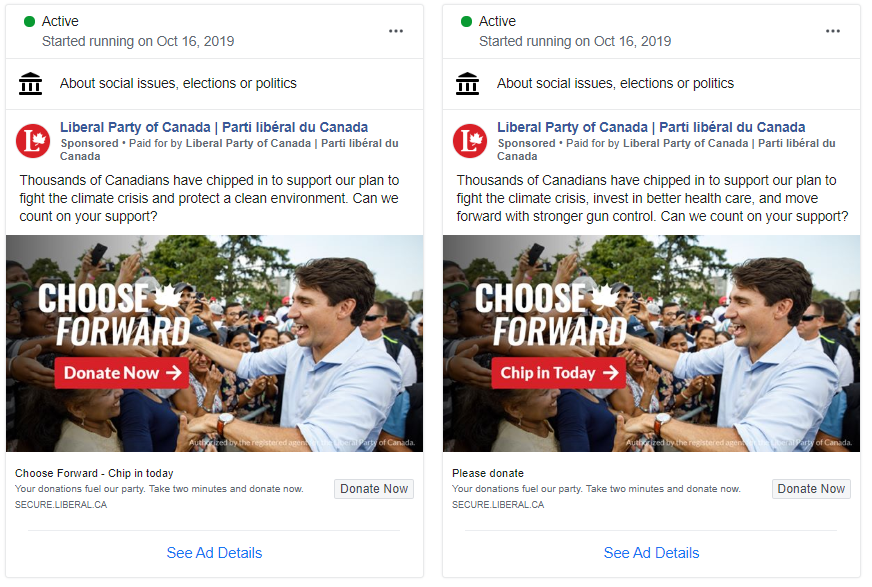 The Liberals are currently running more fundraising ads than the other major parties.

Here we can see 2 similar variations, one using a "Donate Now" button and the other using a "Chip in Today" button.

By running so many different variations with different targeting criteria, the Liberals can determine which ad variants perform best with which demographics, and then target future ads accordingly.

Their video ads may be some of the best content currently being promoted by any party, but their lack of spending means it will not be seen by as many potential voters. 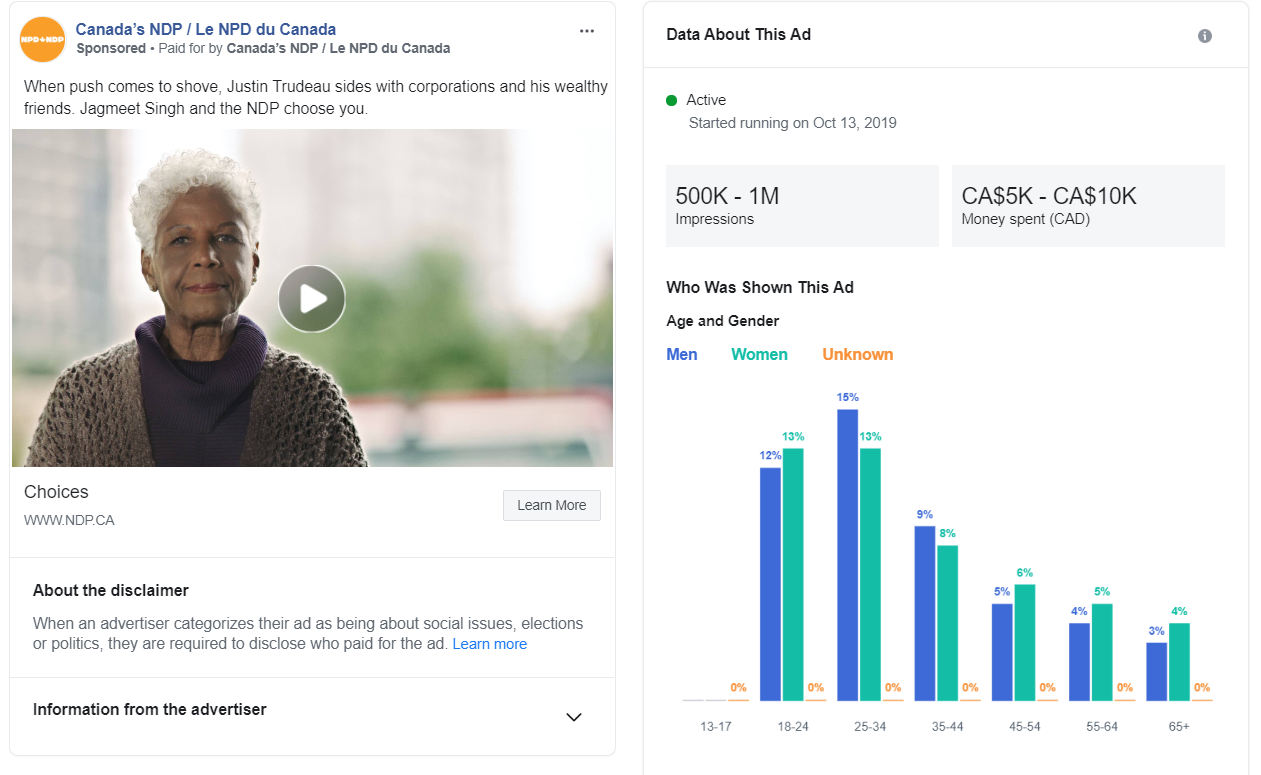 In the past week, the NDP have spent more money on this ad than any other.

The 15 second video is very clear and concise, perfect for Facebook advertising.

It attacks Justin Trudeau and the Liberal government over high medication costs, lack of affordable housing, and continued investment in pipelines.

The ad concludes with the NDP slogan "In it for you". 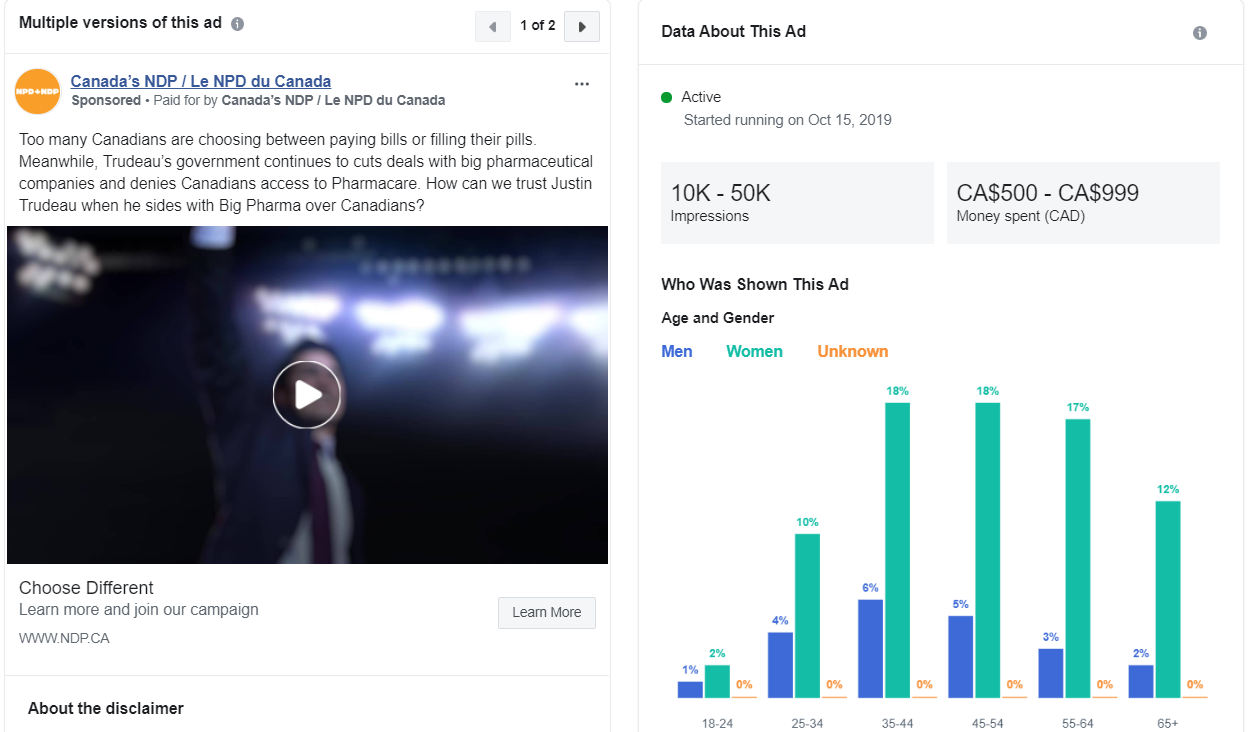 The ad above focuses on Pharmacare, but the NDP are also running similar ads focused on Trudeau's support for oil and gas companies, and the telecom industry.

These short and effective policy based ads may be retargeting voters who previously interacted with past policy-based NDP ads. 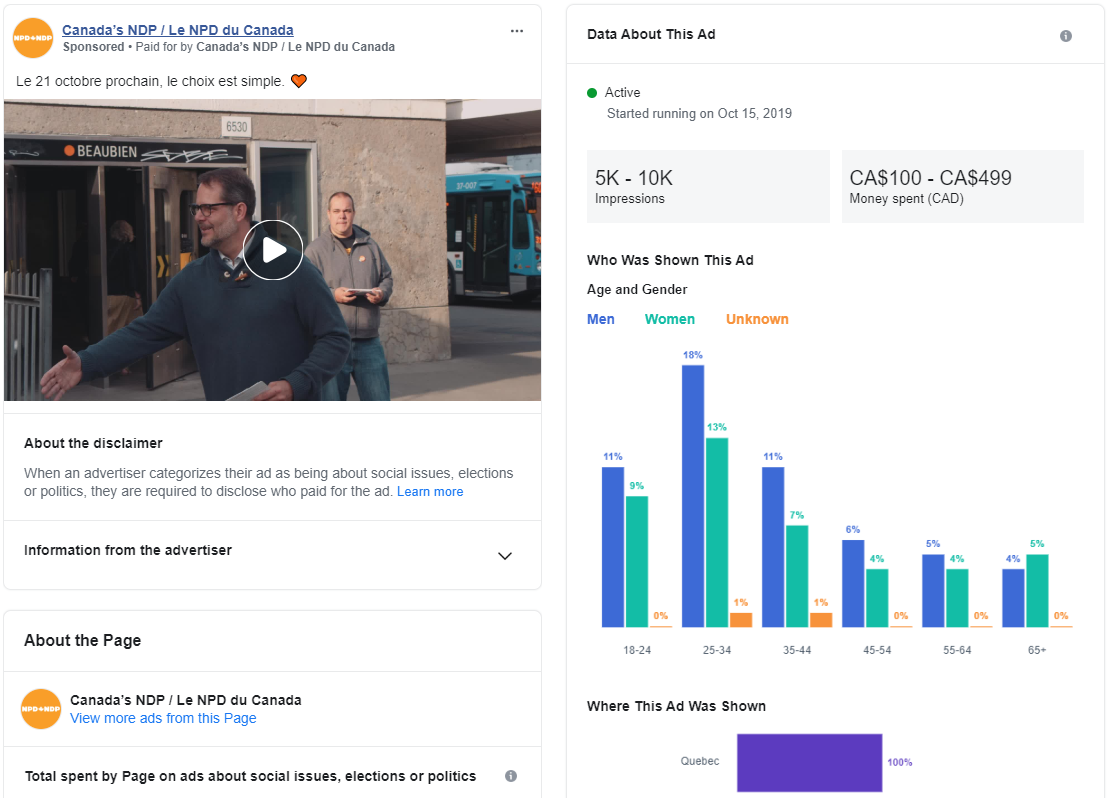 The ad aims to build upon the past success of Jack Layton, and depict the NDP as a legitimate, viable alternative to the Liberals or Conservatives.

We rarely cover the Green Party in our ad tracker as the party has not invested very much money into digital - but with the election coming to a close, their spending gives us some interesting insight into their campaign strategy.

The Greens have spent $20,706 over the last week - more than half their spending since June. 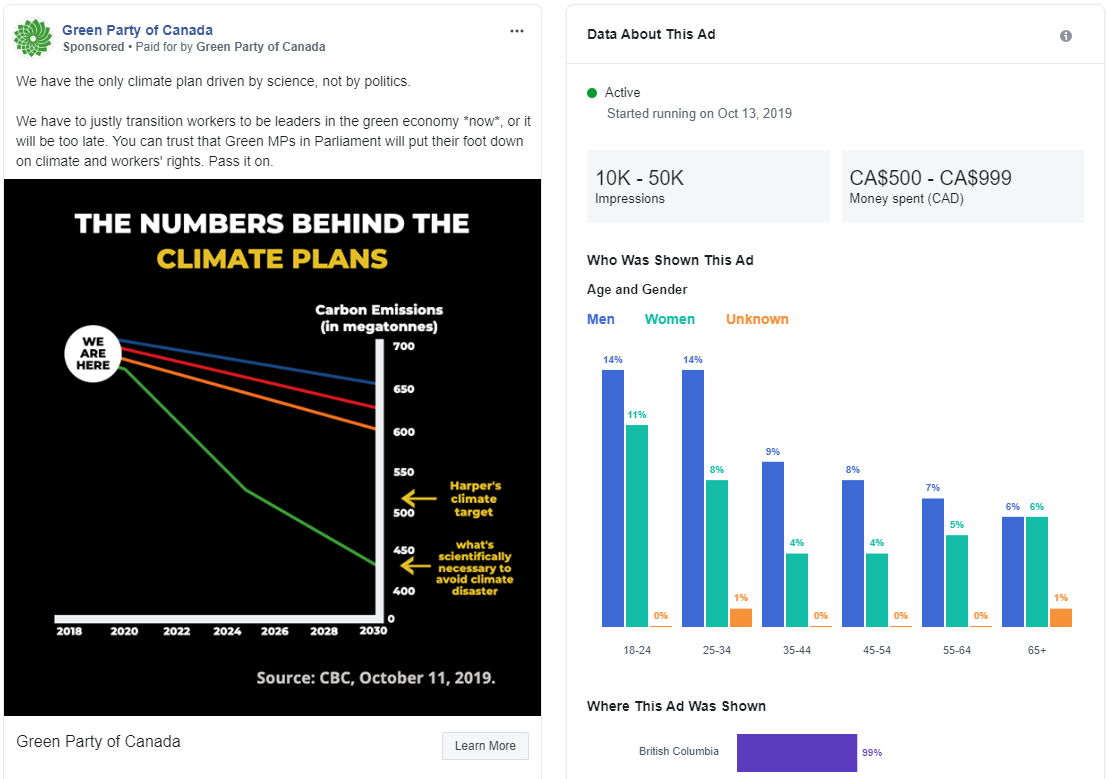 This simple image ad is running in BC, along with a video ad (below). While the video ad is more compelling, for some reason they're featuring a Toronto-area candidate with an ad buy targeting BC voters. It's a very strange choice. 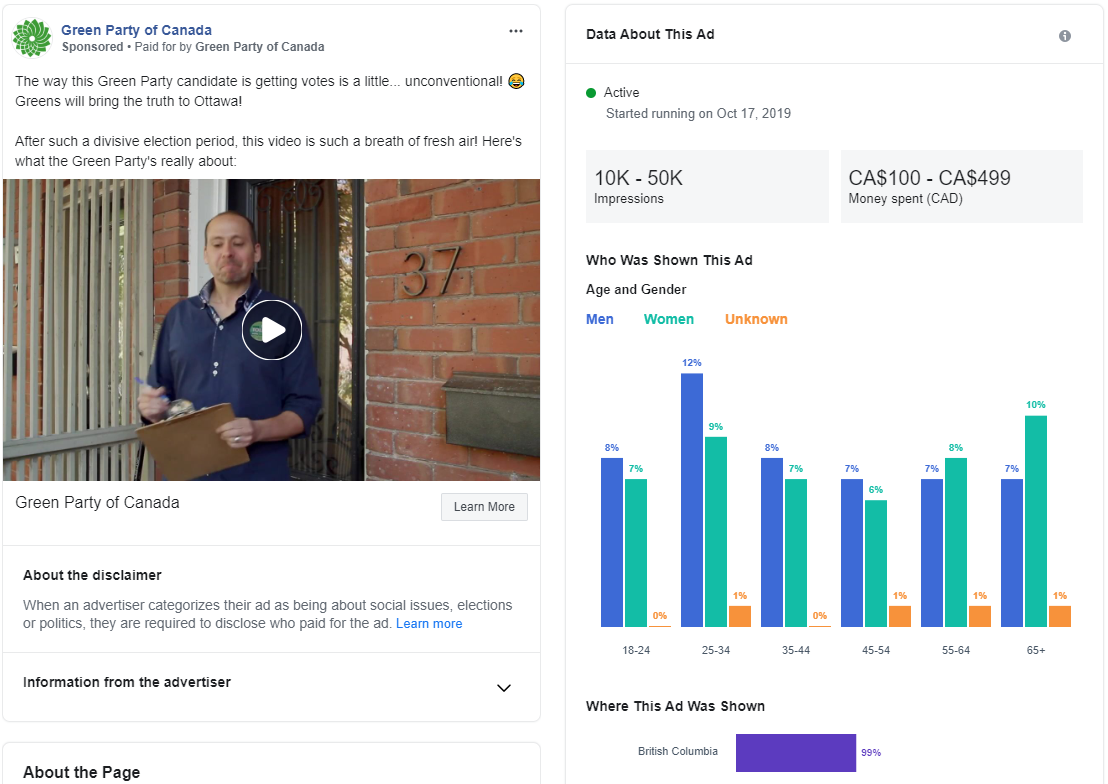 Lastly, the Greens appear to be targeting three ridings in Quebec. They have three high-quality french video ads featuring three specific candidates, showing only in Quebec. While Facebook will only show us the province that the ads are running in, we are assuming that they are targeted specifically to the ridings the candidates are running in. It looks like the Greens believe they stand a shot in three Montreal-area ridings - Mirabel, Outremont, and Mount Royal. 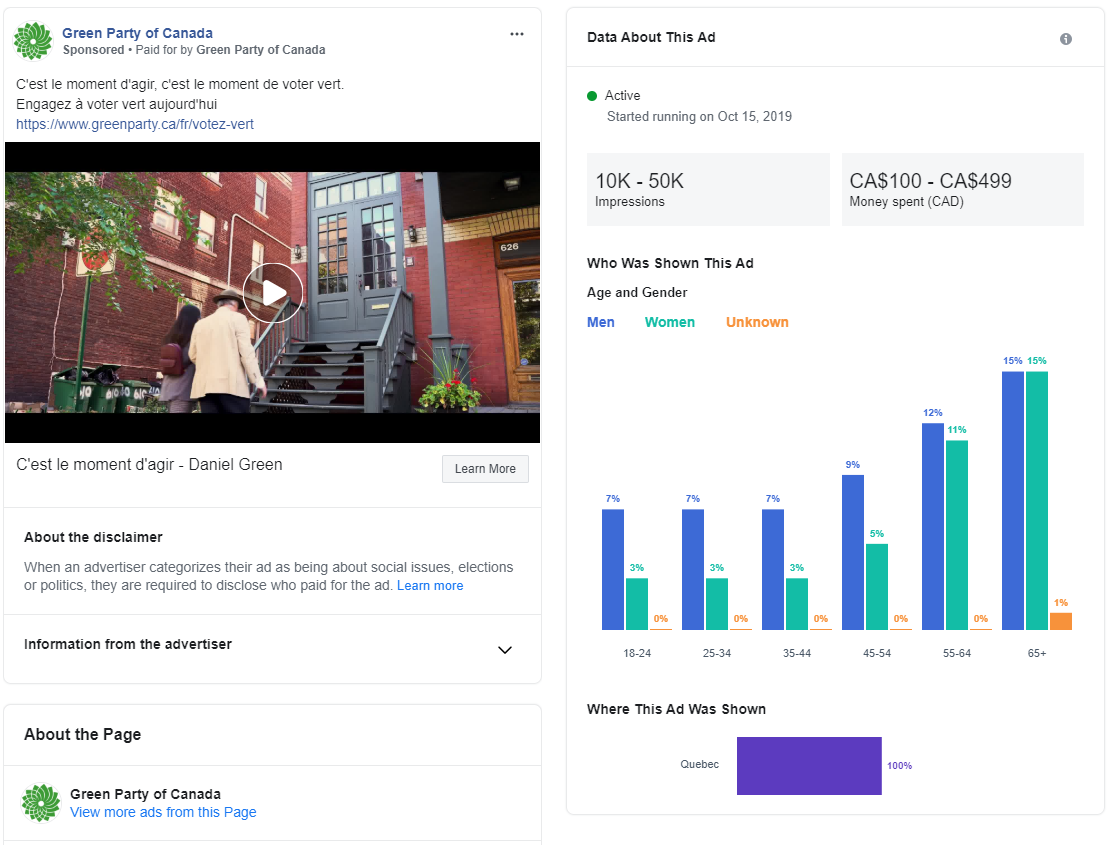 You can view the Green Facebook ad library here.