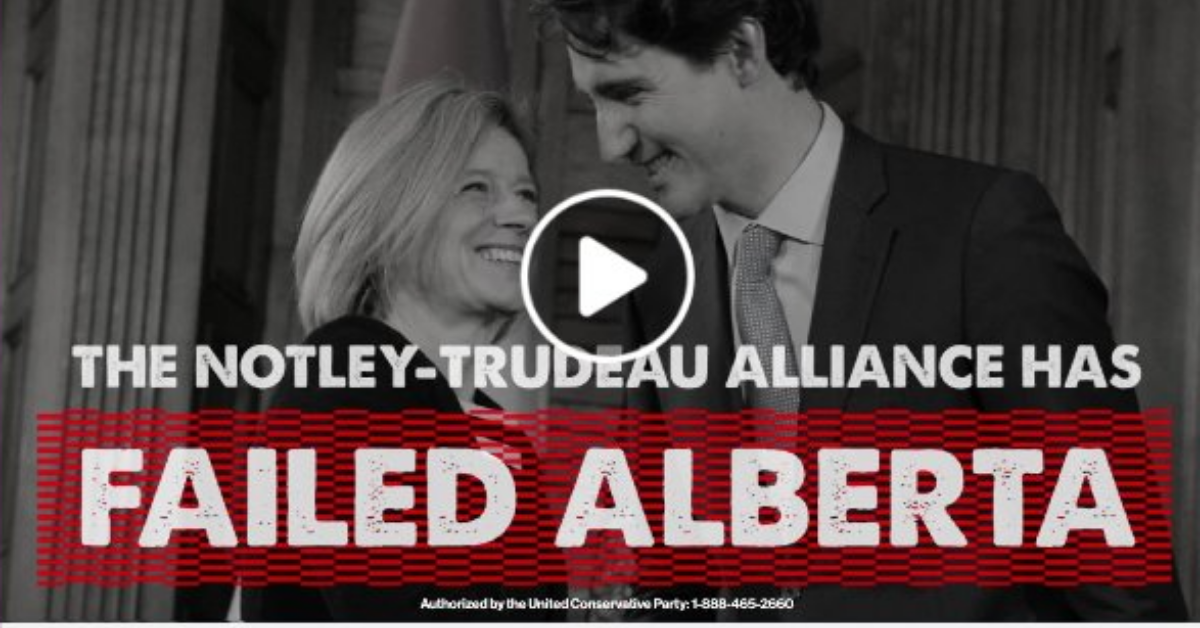 The Alberta election is officially underway, and so is the Facebook advertising battle.

Jason Kenney and the United Conservative Party of Alberta are running 15 ads, all of them videos.

Stephen Mandel and the Alberta Party are not currently running any paid advertisements.

Read on below to see all of the current ads leading up to the Alberta election! 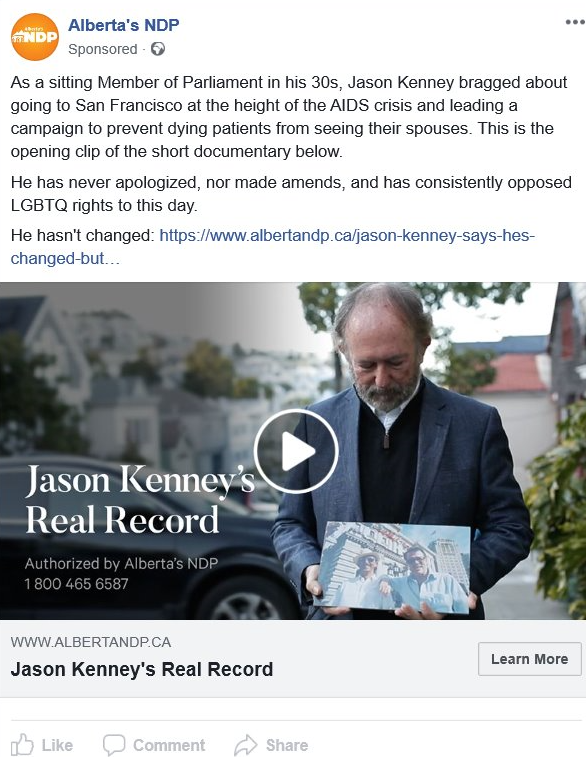 You can view the video, and all active Alberta's NDP ads on Facebook here.

This is the only paid ad currently being run by Alberta's NDP - the video clocks in at 10 minutes - quite long for a Facebook video advertisement (videos that are 30 seconds-1 minute in length tend to perform better).

The advertisement leads to a landing page which states "Jason Kenney says he’s changed, but actions speak louder than words." The page goes on to lay out a history of anti-LGBTQ moves made by Kenney, and asks Albertans to "join the movement for Alberta's future."

Alberta's NDP have put all of their eggs in one basket with their Facebook advertising strategy - the goal is to depict Jason Kenney as an anti-LGBTQ monster.

Typically a well rounded election advertising campaign will include a mix of attack ads and positive, self-promoting, policy-based ads. Alberta's NDP could have highlighted their $25/day daycare plan, or their plan to hire more teachers and reduce class sizes, but they have chosen to focus all of their efforts on bringing down Jason Kenney.

Time will tell if it pays off.

Getting a fair deal for Alberta, job creation, a healthcare guarantee, cutting red tape, and scrapping the carbon tax.

Jason Kenney and the United Conservative Party of Alberta are taking a much more diverse, well rounded approach to their Facebook advertising campaign. They are running 15 different video ads, mixing in attacks on Rachel Notley and Alberta's NDP with positive policy based advertisements. 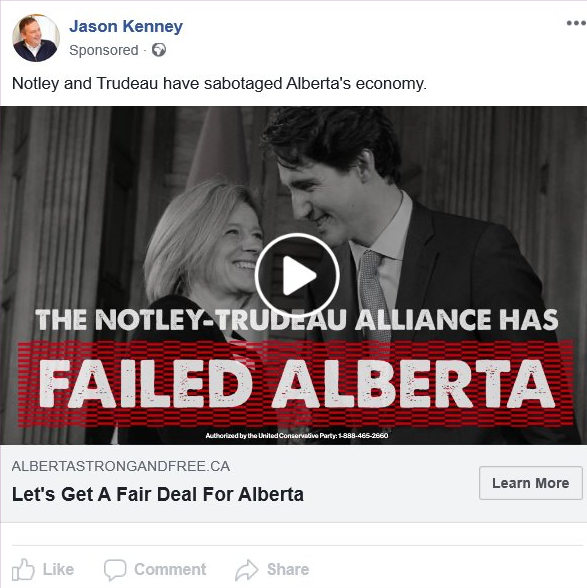 You can view the video, and all of Jason Kenney's active ads on Facebook here.

The United Conservative Party of Alberta has decided not to run any of their ads through the official party Facebook page - instead they are running all of their 15 video advertisements from the Jason Kenney Facebook page.

This isn't a strategy we see often, but in this case it makes sense - the party was only formed in July, 2017 and the Facebook page only has 23k likes, while Jason Kenney's page has 125k.

A common theme in many of these ads is getting "a fair deal for Alberta."

He is appealing to Albertans who feel that their economy has suffered and their province has been treated unfairly under Premier Notley and Prime Minister Trudeau.

The messaging is simple and it is sure to resonate with conservatives in Alberta. 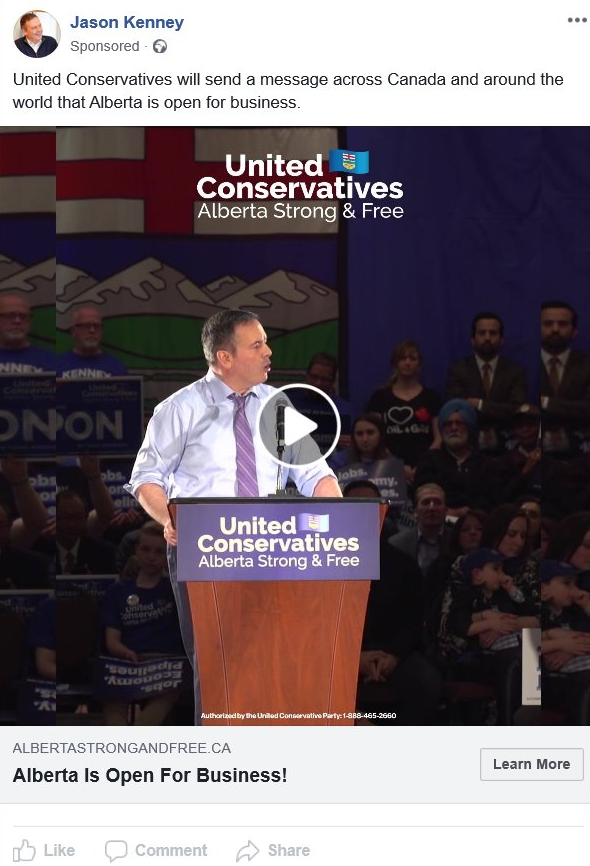 This ad is taken straight from Doug Ford and the Ontario PC Party's playbook - "Alberta Is Open For Business!"

Another clear, simple message that will generate support from Albertans who feel like businesses have suffered under Rachel Notley. 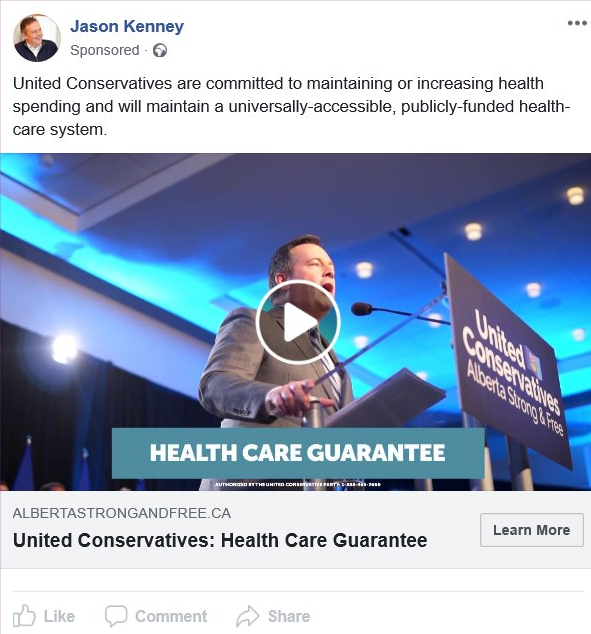 Another recurring theme in the United Conservative Party of Alberta ads is their Health Care Guarantee.

They want to ease concerns and assure Albertans that they are not going to make any cuts to health spending, and that they will maintain a "universally-accessible, publicly-funded healthcare system." 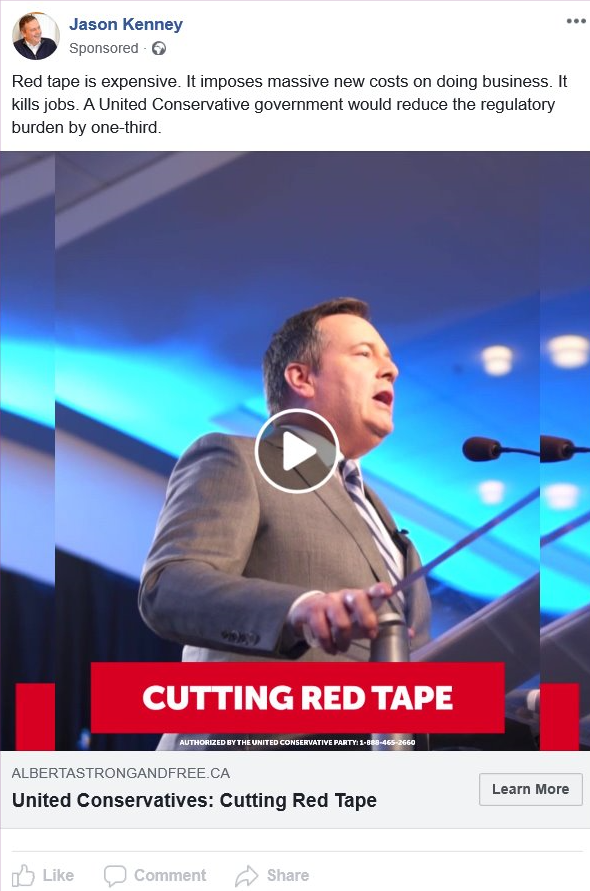 Another move that follows in the footsteps of Doug Ford's recent success in Ontario - a commitment to cutting red tape.

Once again we see simple, effective messaging on an issue that appeals to conservatives who are fed up with red tape and bureaucracy. 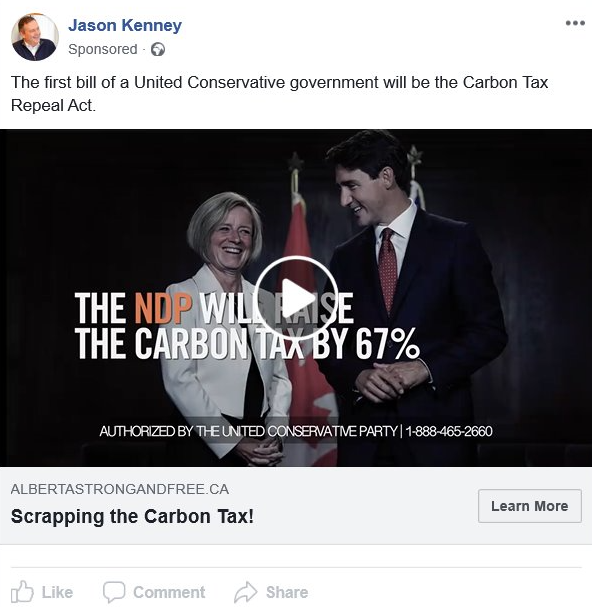 The final issue that the United Conservatives are focusing on - scrapping the carbon tax.

We have seen this tactic from the Doug Ford and the Ontario PC's, as well as from Andrew Scheer and the Conservative Party of Canada.

It has proved effective for them, and we suspect it will draw support from conservatives in Alberta as well.

As of March 26, the Alberta Party and Stephen Mandel are not running any paid Facebook ads. If this changes you will be able to access their ads via the links below: