Today is by-election day in four ridings across Canada. That means, as per Elections Canada rules, no online advertising in by-election ridings today!

But we’ve got you covered at eddt — here are some of the ads Canada’s big political parties were running up until this weekend!

The Liberals are all in online in both South Surrey-White Rock and Scarborough-Agincourt. They are running multiple split-tests aimed at getting out the Liberal vote. 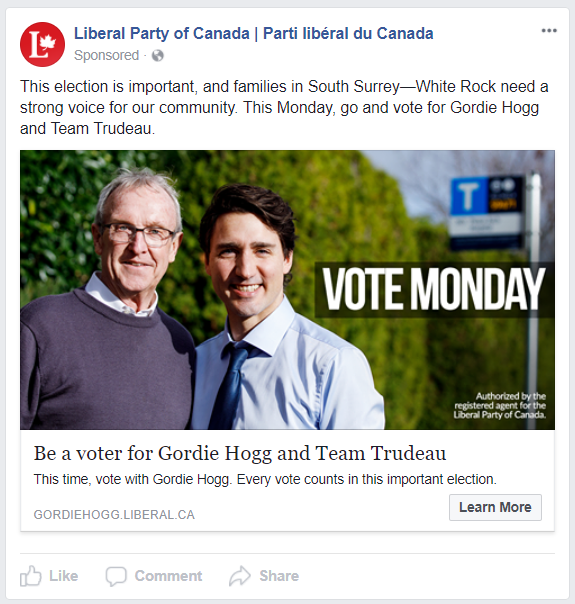 The Liberals have been running different versions of this ad for weeks, with a variety of messages. Obviously the visual is effective. Let’s see if it helps get voters to the ballot box. 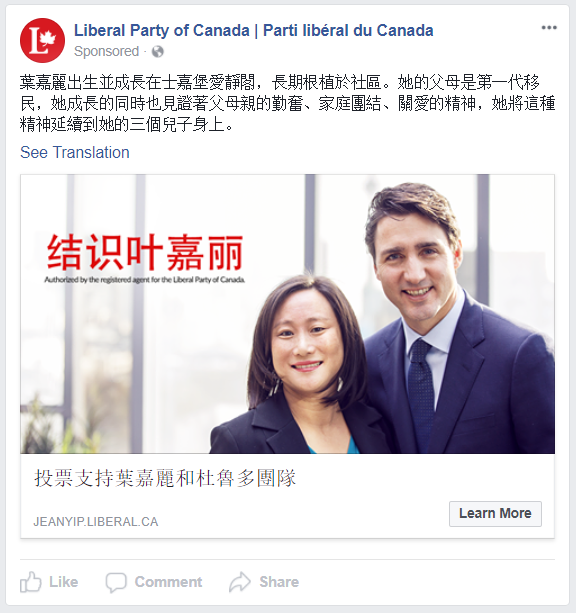 The Chinese community in Scarborough-Agincourt is clearly a key voter group in the riding. 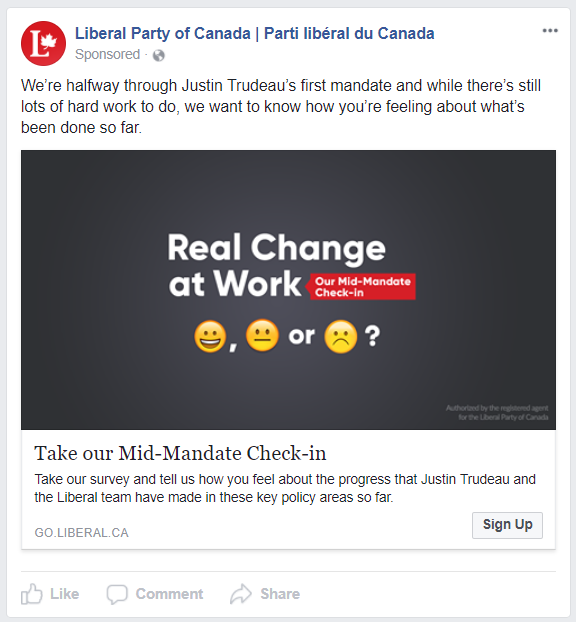 The Liberals want to hear from you. How democratic!

We would love to know which audiences the Liberals are targeting. Is this a supporter identification tactic or are they trying to get a legitimate sense of where they stand from Canadians? 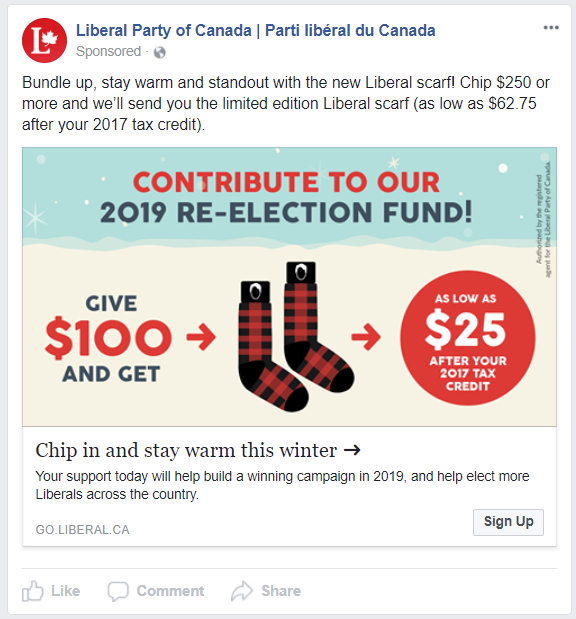 It’s holiday season, and that means it’s time for end-of-quarter and end-of-year fundraising!

One other interesting note — the Liberals are running multiple versions of this ad, asking different amounts. I wonder if they are targeting these ads by income, or if they are simply running a split test to see which ads are more effective? 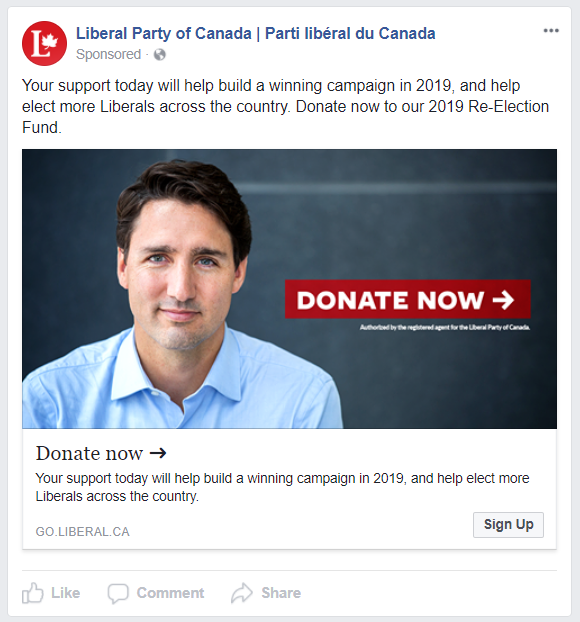 Last week, we speculated that the Conservatives may have been refocusing their efforts on the South Surrey-White Rock by-election. This week, they added more ads for Scarborough-Agincourt — including one incredibly aggressive ad on safe-injection sites. 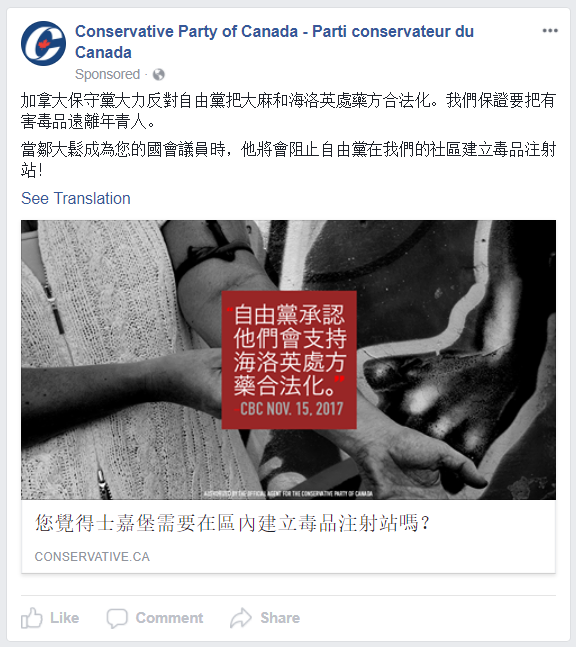 The ad (which also ran in English) is clearly aimed at appealing to the more socially conservative voters in Scarborough-Agincourt. It may be effective — but it’s hard to square this type of ad with Andrew Scheer’s efforts to convince Canadians that this is a friendlier version of the Conservative Party. 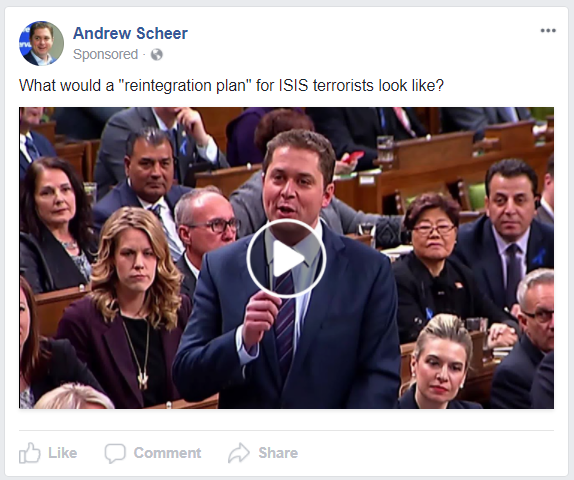 Outside of the by-elections, the Conservatives continue to try and introduce Andrew Scheer to Canadians. 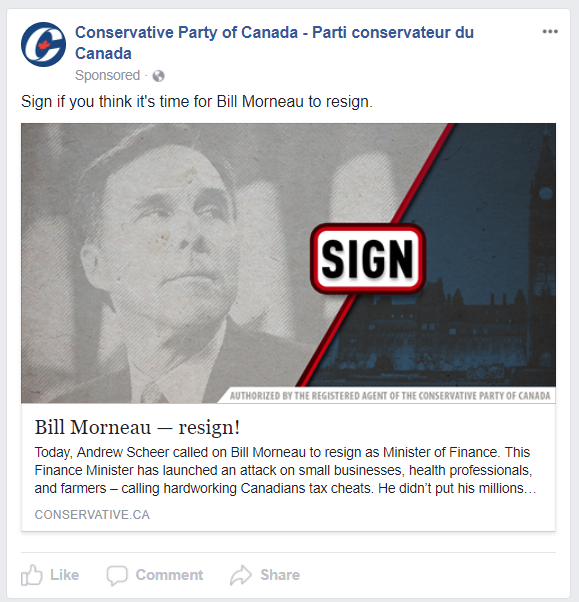 The NDP have started running online ads with a little more consistency — good news for the party as they look to build towards the 2019 election. Most of their ads are issue-focused — good for building lists. But no sign of by-election advertising, so count on a bad night for the NDP. 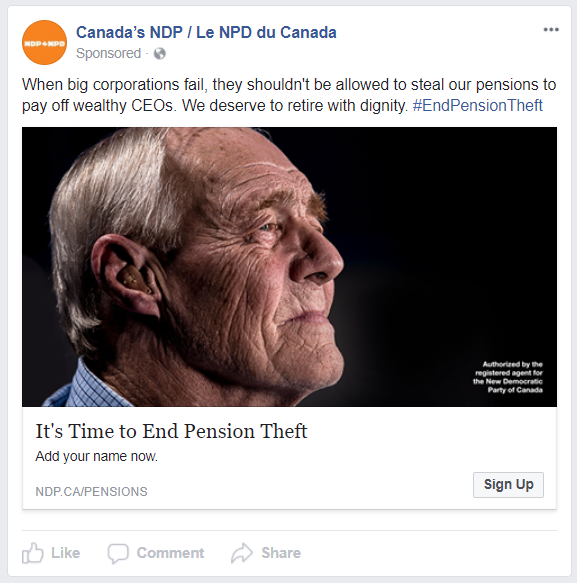 Interestingly, the NDP is running key issue ads on a completely different topic than they were last week.

We’re guessing the NDP are in a testing phase. They need to figure out which messages resonate best with their supporters, and build a narrative around them. Social ads like these are the best way to test such messages.

Another interesting note — all NDP ads were running in both English and French. Clearly the NDP isn’t intending to give up on their Quebec base. 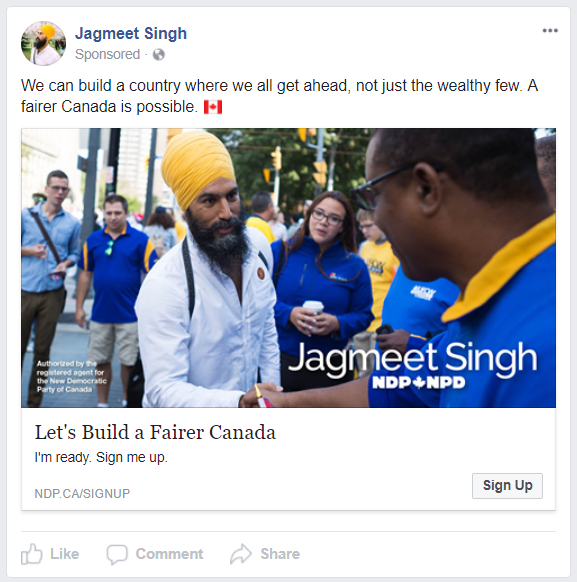 This ad—featured on Jagmeet Singh’s Facebook page—shows that the NDP is starting to get it. They have a new leader and a party that needs to grow fast.

The best way to do that?

Visually appealing ads with a compelling ask that urges supporters to give you their email. That’s exactly what we do for our clients, and what this ad does for Singh’s NDP. 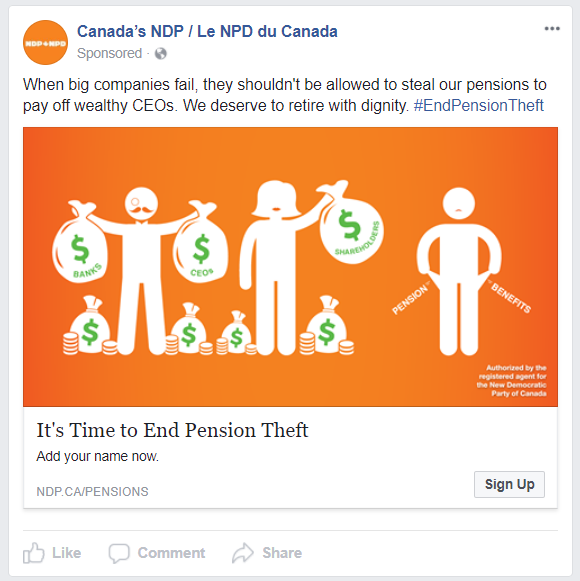