Conservatives Intensify "Not As Advertised" Video Campaign Against Trudeau 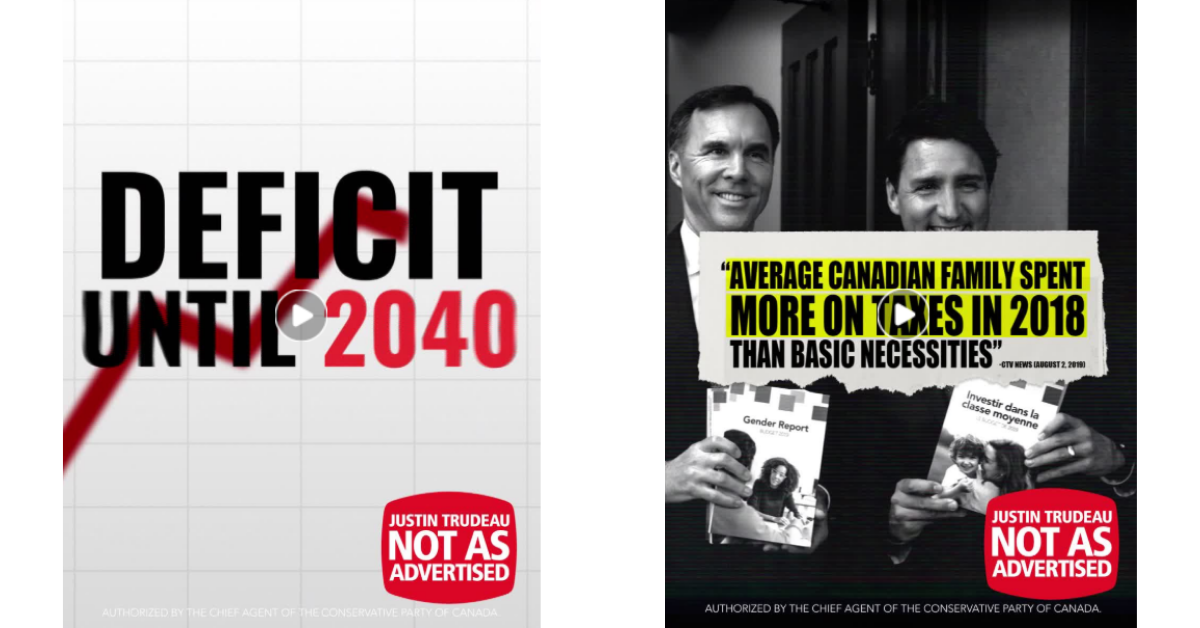 The Conservatives have released a slew of new "Not As Advertised" video ads attacking Justin Trudeau, most of which focus on the Prime Minister's role in the SNC Lavalin scandal, and the growing federal deficit.

The Conservatives lead in ad spending this week, spending close to $18,000.

Meanwhile the Liberals have spent nearly $10,000 over the same time period. Their newest ad campaign is a series of french language simple sign up ads asking voters to pledge to vote Liberal.

The NDP have drastically increased their Facebook advertising budget, spending nearly $7000 over the past 7 days. They continue to run a diverse campaign of issue-based simple sign up ads and fundraising ads.

The Conservatives have been busy this past week, releasing several new video ads in their "Not As Advertised" campaign against Prime Minister Trudeau.

Many of the ads are short (6-10 seconds) and jarring, featuring brief sound bites that portray Trudeau as an unethical PM who has failed to keep his promises.

In addition to these new video ads, the Conservatives have also launched a simple sign up ad campaign promoting their plan to make maternity benefits tax free.

They also ran a number of riding-specific ads asking constituents to urge their Liberal MP's to vote in favour of a parliamentary investigation into the SNC Lavalin scandal.

The Liberals are testing out a variety of french language simple sign up ads this week. They all feature the same ad copy, with different images.

They are likely A/B testing to determine which images resonate best with their target audience.

The Liberal party has also re-launched their simple sign up campaign designed to survey voter motivation.

The ads feature very similar images, with different ad copy related to a variety of issues, from fighting poverty to fighting climate change.

These ads allow the Liberals to assess which issues are more engaging for voters, which can help direct their future messaging.

The most notable change in the NDP's Facebook advertising lately has been their drastically increased budget. Almost half of their total spending since June occurred in the past week.