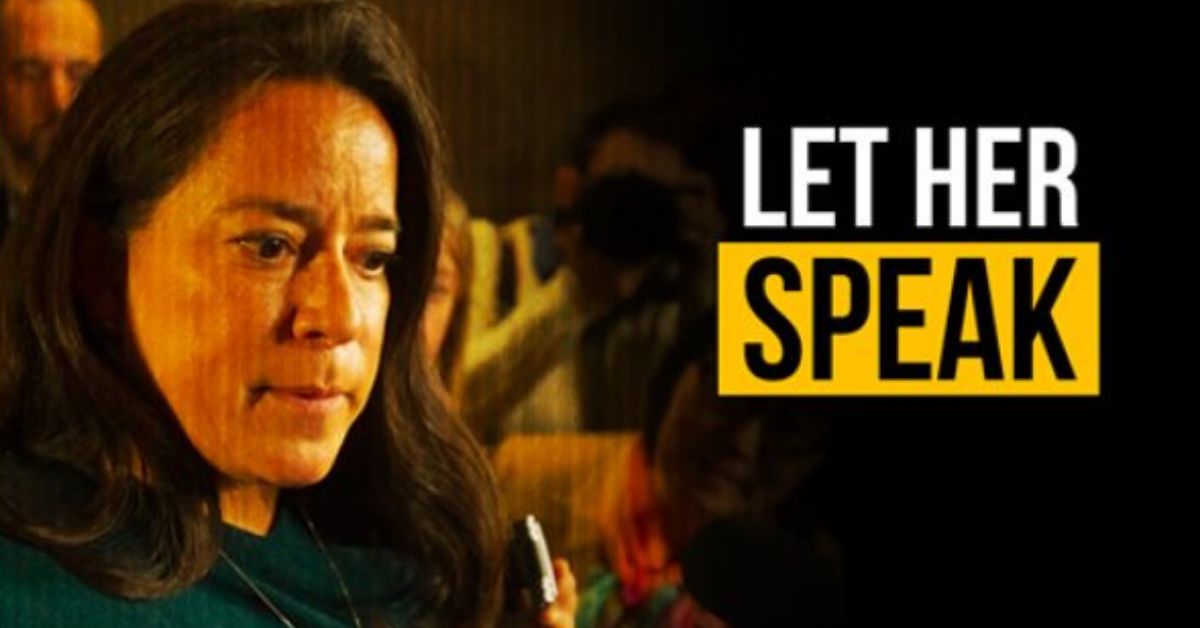 The Conservatives are furious after the Liberal majority in the justice committee shut down their recent attempt to call Jody Wilson-Raybould to testify again on the SNC-Lavalin scandal. They have launched a series of new ads as part of their "Let Her Speak" campaign.

Meanwhile the Liberals are shifting the focus to climate change, promoting themselves as the only party with a real plan to address the issue.

Stay up to speed with the Facebook advertising campaigns from every major party - check out the latest ads below! 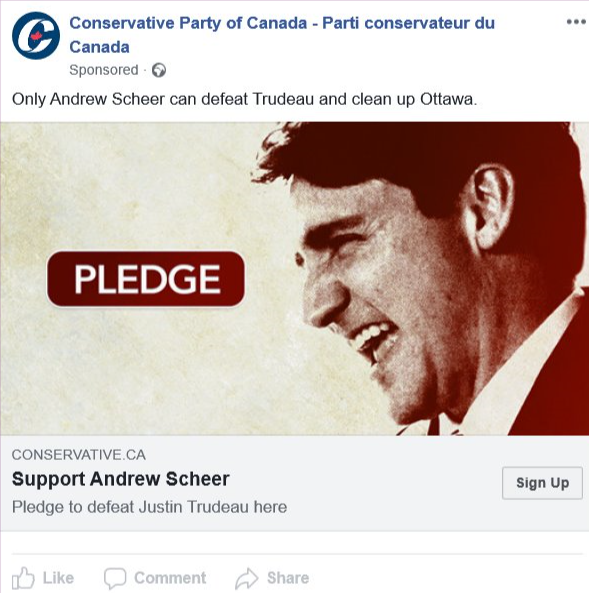 The Conservatives have rolled out several new simple sign up ads this week, positioning Andrew Scheer as the only option to "defeat Trudeau and clean up Ottawa."

These ads should play well with Conservative supporters in light of the SNC-Lavalin scandal. 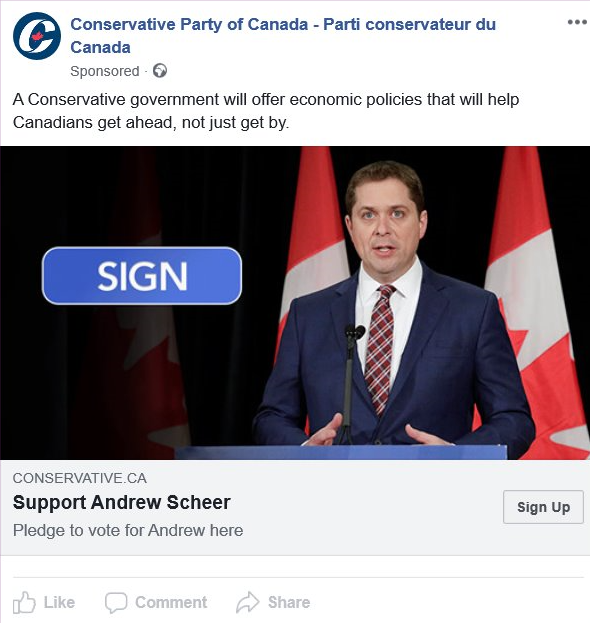 Another new simple sign up ad from the Conservatives, this time taking a more positive approach. 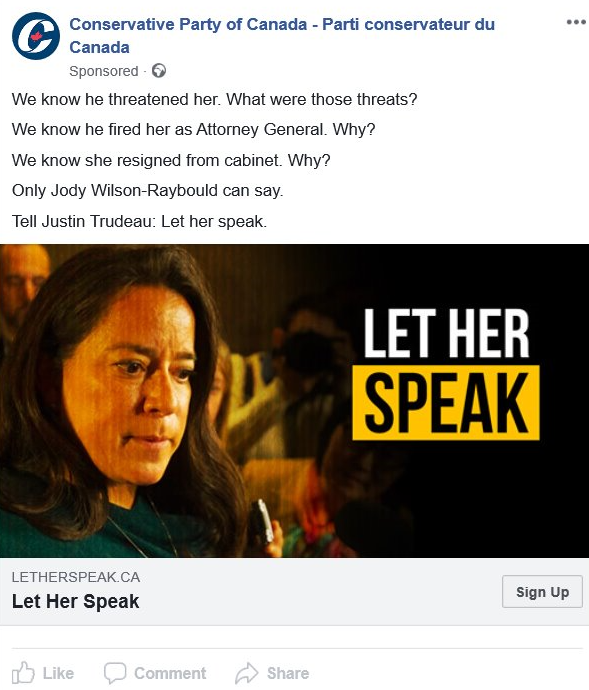 And the highlight of the Conservative's Facebook advertising strategy this week, the new "Let Her Speak" campaign.

This campaign is sure to resonate with voters who are upset with the government's handling of the SNC-Lavalin scandal.

The ads link to a slick new landing page which calls on Canadians to phone or email Justin Trudeau, and sign a petition, demanding that he waive solicitor-client privilege. 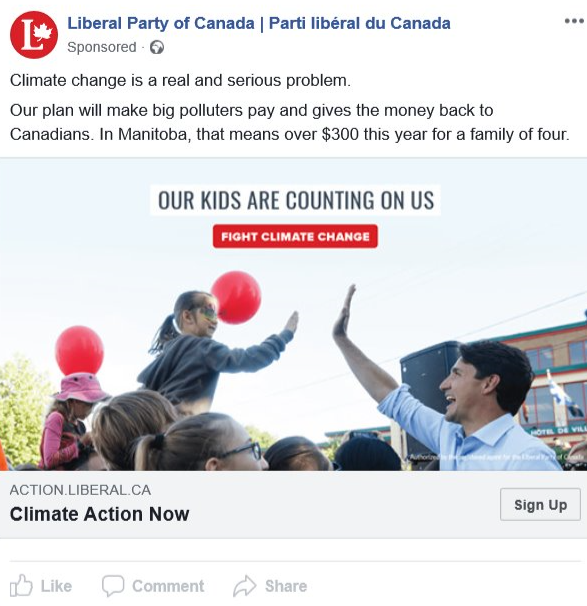 The Liberals have rolled out a new campaign focused on climate change - the new ads use location targeting to tell residents in each province how much money they can expect to receive from carbon dividends. 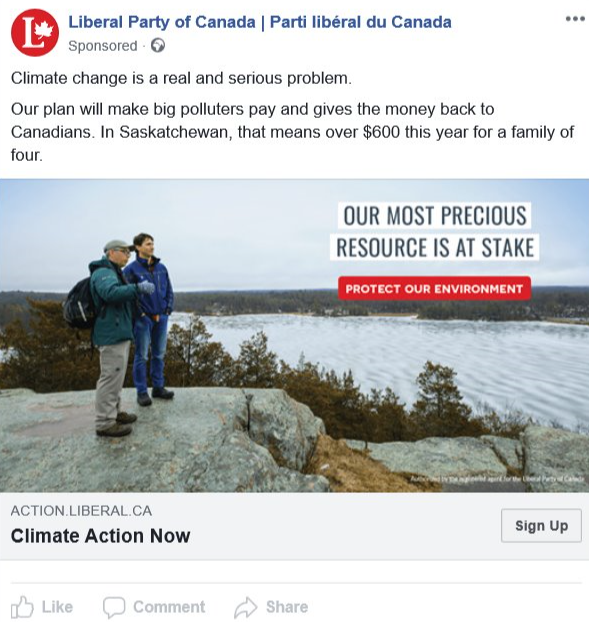 The Liberals continue to tout themselves as the only party with a serious plan to fight climate change.

We can see that their plan will benefit certain provinces more than others - a family of 4 in Saskatchewan can expect to receive $600, as opposed to $300 for a family in Manitoba. 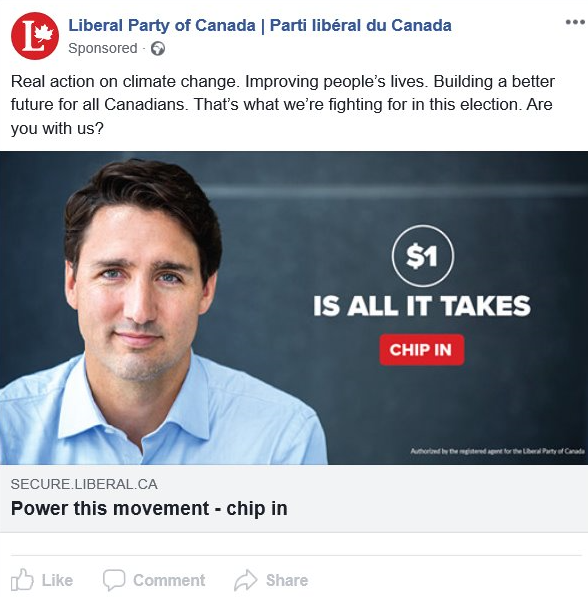 In addition to their petition ads on climate change, the Liberals have also rolled out new fundraising ads on the issue.

Ads such as this one tend to perform very well - asking supporters to chip in a small amount typically results in much higher engagement and more unique donors.

Copied and pasted from last week's post (again) as nothing has changed on the NDP front for over a month now.