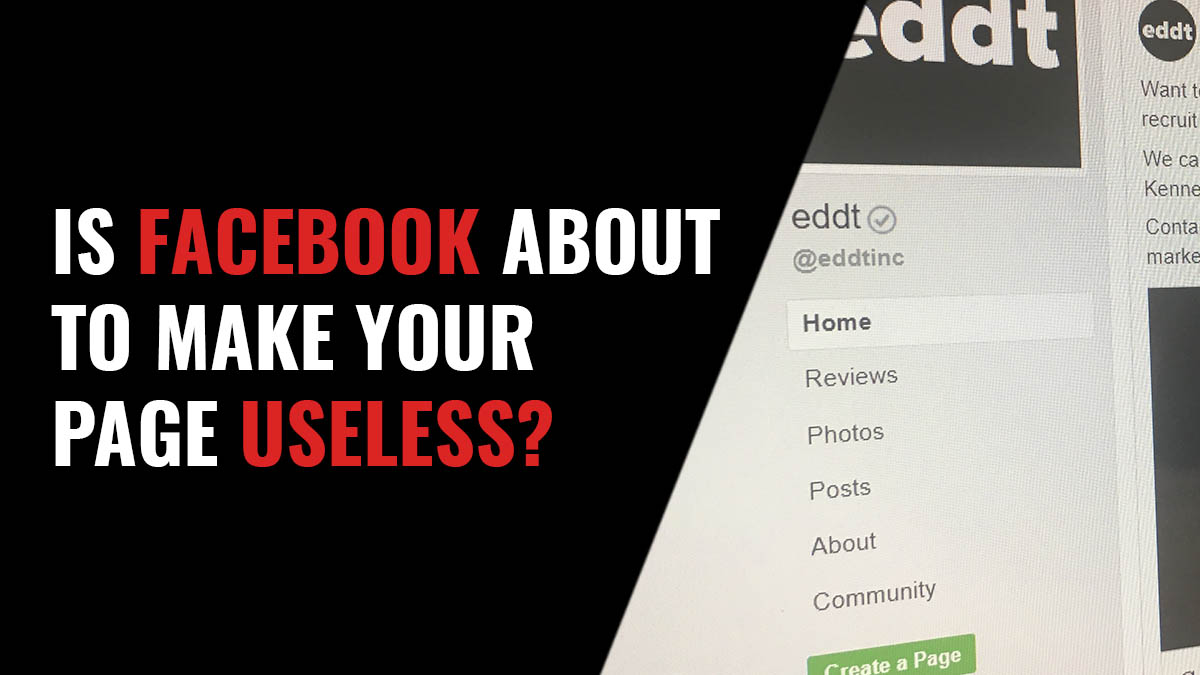 New Facebook changes causing “biggest drop in organic reach we have ever seen,” according to reports from Slovakia, one of six countries where they are being tested.

Facebook is testing a new feature which removes all of your Page’s posts from the News Feed, moving them to a less prominent “Explore” tab.

The change is being tested in six countries (Sri Lanka, Bolivia, Slovakia, Serbia, Guatemala, Cambodia) and, according to the journalist who first reported the test, pages are seeing four-times fewer interactions and reach has fallen by two-thirds.

Under the proposed changes, the only way for your Facebook Page’s posts to be seen by people in their main news feed is to buy advertising.

Facebook has confirmed that this was a trial feature, and they don’t plan to roll the change out globally after backlash. But this has huge implications for everyone who has invested in their Facebook page.

Facebook, ultimately, is a business. And the biggest part of their business is selling ads. Facebook’s algorithm has made it increasingly difficult over the years to get your Page’s content in front of your audience without buying ads.

It’s no surprise that Facebook is testing out this feature — they want to sell more ads, and they are constantly experimenting with ways to get more ads in front of people. This is a problem for Facebook Page owners who have neglected advertising as a part of their strategy.

What should page owners do?

I am a strong believer in owning your platform. What that means is you need to have your own list, and a way to contact them that won’t disappear tomorrow. In a digital context, that means building your own email list.

Email has been around for over 40 years. It’s not going anywhere — and unlike other services, like Facebook, you have complete control over your email list. Even though we use email marketing tools like Drip for email, if you have a list, you always have an option to move it somewhere else. Unlike your Facebook Page likes, an e-mail list will always have the same value.

The best time to start building your email list is yesterday. The second best time is right now.

And here’s the catch-22 with Facebook. Not being able to reach your entire audience without paying for it? It sucks! But paying to reach your audience? Incredibly cheap. And buying Facebook ads is the easiest and fastest way to build your own email list.

People resist the urge to buy Facebook ads because they think they can do social media for free. For a period of time, that was kind of true. But it’s becoming increasingly difficult, and if these changes are rolled out globally, it may be impossible.

Some people even think they should hire someone full-time to do social media, without investing any advertising dollars. I’ve been in offices where someone is getting paid $60,000 a year, or more, to report back to their boss once a month that they’ve added 500 new likes to the Facebook page. They actually consider this a success, when ads to achieve the same results would have cost literally dollars per day! And worse — these aren’t even meaningful results! If you aren’t tracking an important metric, like sales, donations, or email acquisition, then you’re missing the point.

And the point of buying Facebook ads is growth. Rapid, exponential, explosive growth is possible for any business, non-profit, or political campaign — you just need to find a model that works. If you can run a Facebook ad that costs $1 per lead, and each lead is worth $5 in new business, guess how much you should spend on Facebook ads? Every single penny you have! That’s how you grow quickly.

You need to build your own list. You want to sell your product or fundraise for your organization or campaign. We can help you.

Nobody likes politicians, and we’ve made them popular. Imagine what we can do for your small business or non-profit organization.