Less Than One Week Until Election Day 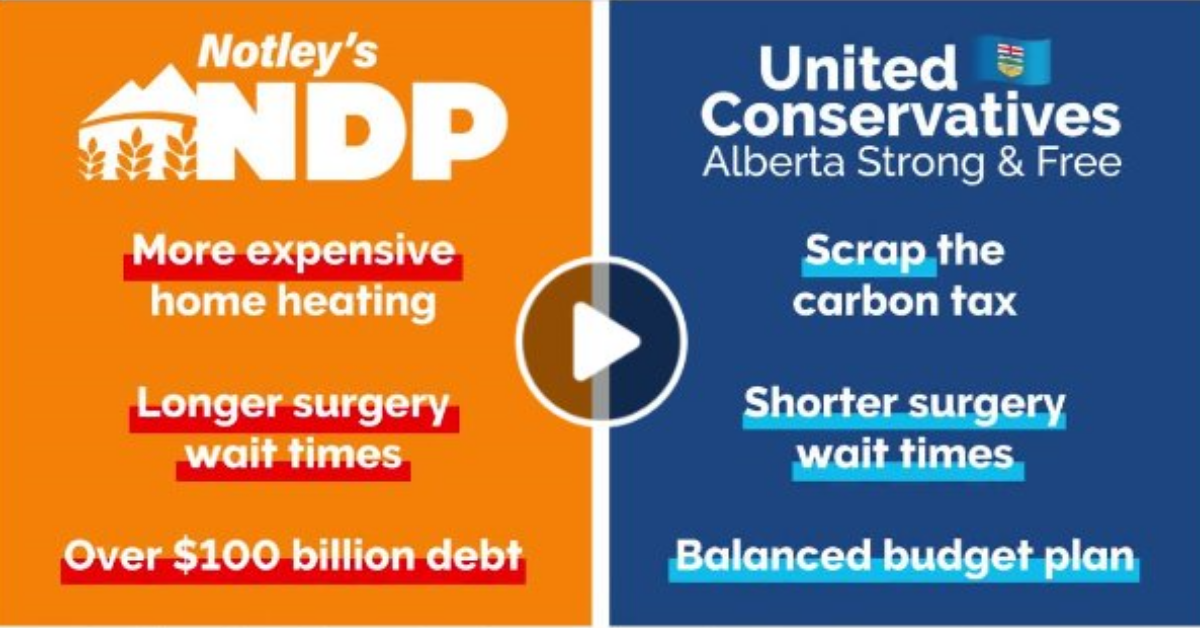 Election day is now less than a week away, and the Facebook advertising campaigns have really been heating up this week.

Rachel Notley and Alberta's NDP have overhauled their advertising strategy, and they have picked 9 key ridings to focus on with targeted ads.

Jason Kenney and the United Conservative Party of Alberta have launched a number of new video ads, and continue to offer a more diverse advertising strategy.

Meanwhile, Stephen Mandel and the Alberta Party have finally entered the fray with a set of short and effective video ads.

Election day is fast approaching - who is winning the Facebook advertising battle? Read on and decide for yourself!

A new strategy this week from Alberta's NDP - they have scrapped their lengthy video ads in favour of 3 shorter, more direct video ads.

They have also picked 9 ridings as key battlegrounds, using targeted advertising to call for volunteers and to distribute lawn signs. 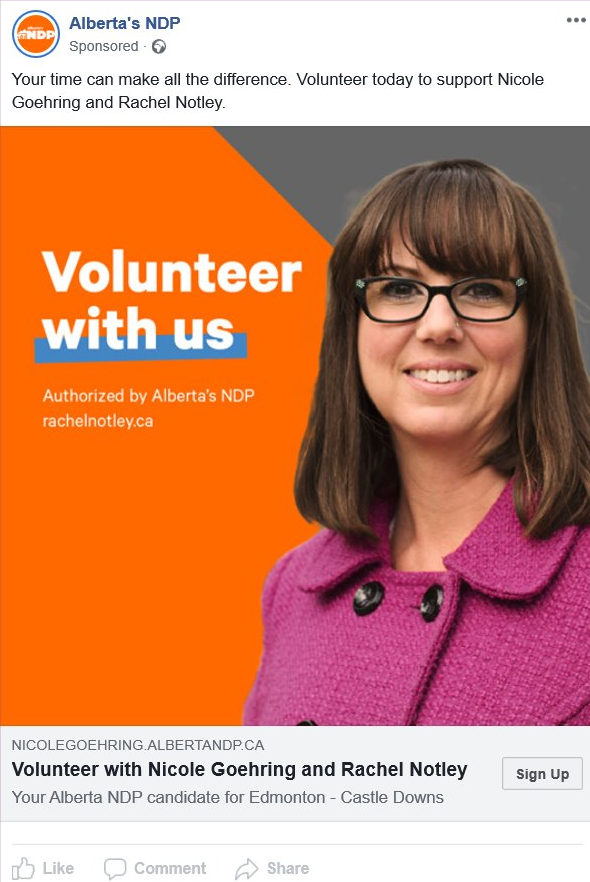 The ads are very similar for each riding - here is a sample of the call for volunteers in Edmonton - Castle Downs.

Location based targeting such as this can be very effective in mobilizing individuals in a particular area. 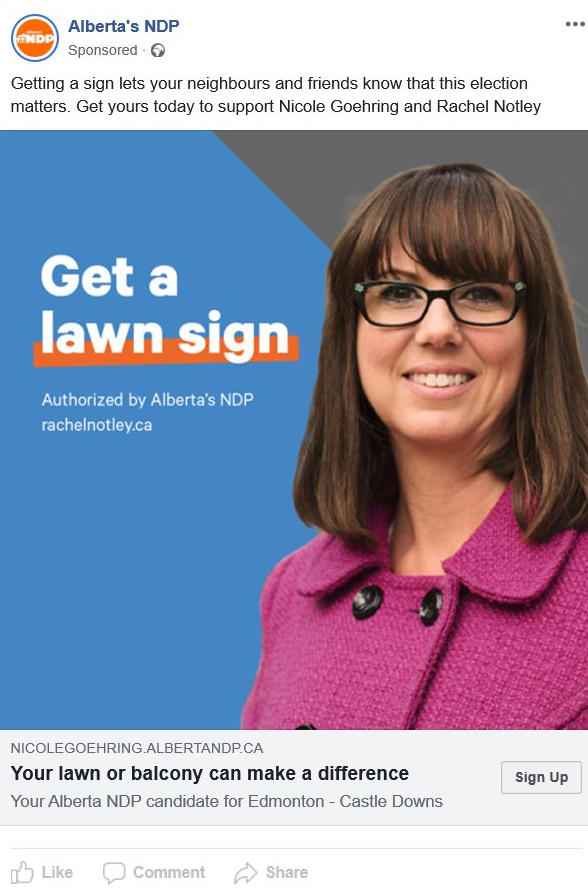 The "Get a lawn sign" ad from Alberta's NDP - they are running similar versions of this ad in the 9 key ridings mentioned above. 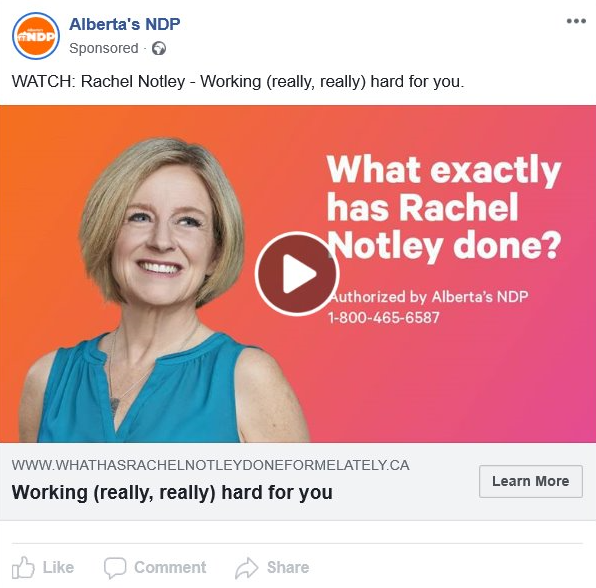 The latest video ad from Alberta's NDP, clocking in at a little over a minute it is still a bit lengthy for a video ad.

However it is a big improvement over the ads they have run the past 2 weeks. The ad lays out a series of Rachel Notley's accomplishments during her time as premier. 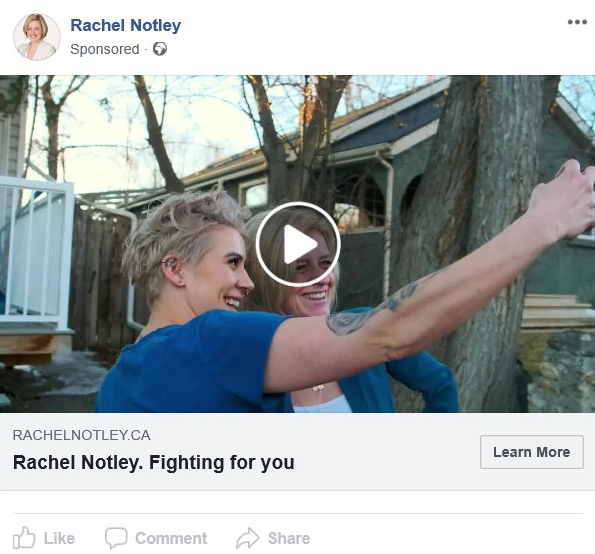 Rachel Notley has also started running 2 paid video advertisements on her own page, separate from the Alberta's NDP Facebook page.

This one clocks in at 15 seconds in length - it is clear and concise and in our opinion the best video ad we have seen from Alberta's NDP so far. 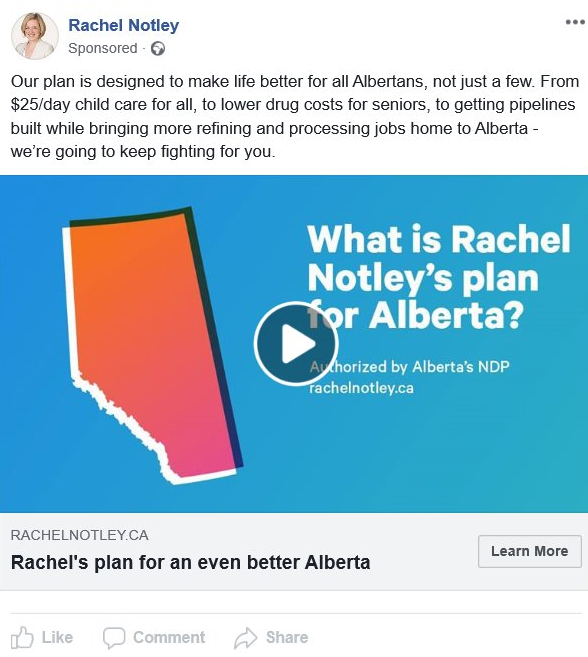 The 2nd video ad from Rachel Notley is just over 1 minute 30 seconds long. This is still lengthy for paid Facebook video ads, but again it is an improvement over what Alberta's NDP have been offering the past 2 weeks.

This ad lays out Notley's plan for Alberta, including strong healthcare and education, diversifying the economy, and affordable childcare.

You can view all active Alberta's NDP ads on Facebook here.

You can view all active Rachel Notley ads on Facebook here.

Jason Kenney and the UCP continue to run the most diverse set of video ads, and they have rolled out 3 new ones this week.

Apart from the new ads pictured below, the UCP continue to run ads focused on Alberta being open for business, putting patients first, cutting red tape, the failure of the "Notley-Trudeau alliance," and scrapping the carbon tax. 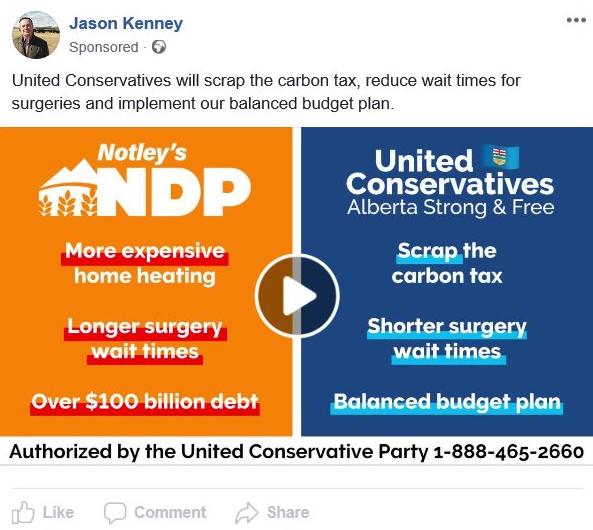 A tried and tested format for election ads, simply comparing and contrasting the UCP to the NDP. 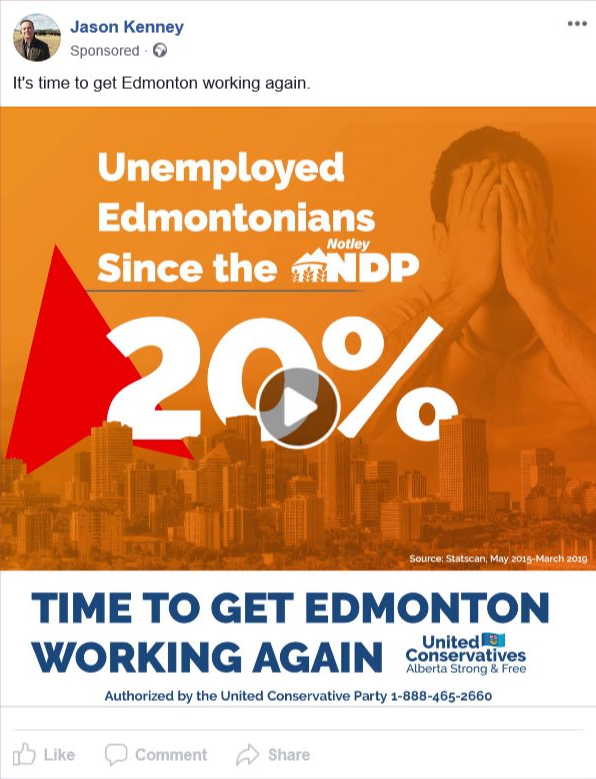 Another new video ad from Jason Kenney and the UCP, highlighting Statscan data from May 2015-March 2019, showing that there are now 20% more unemployed Edmontonians.

Job creation is a large part of the UCP platform heading into this election. 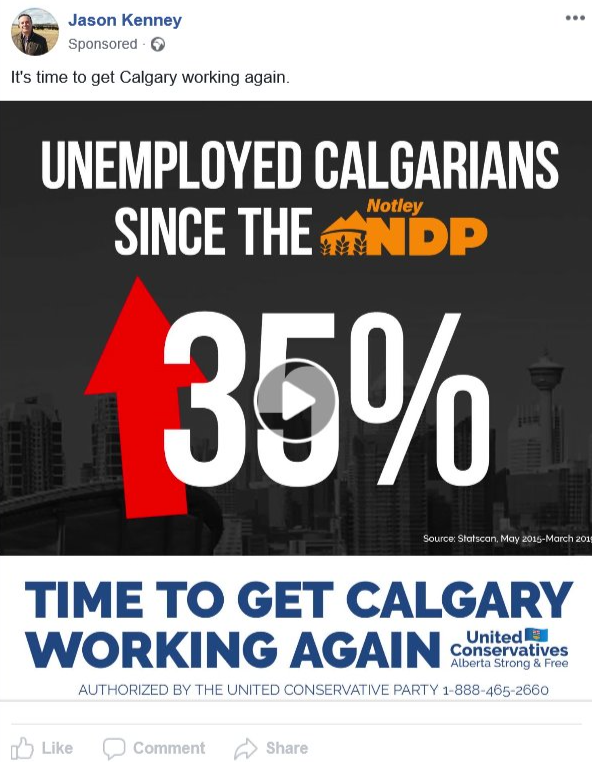 Jason Kenney and the UCP are hammering the NDP on jobs and the economy, and promising to get Alberta working again. 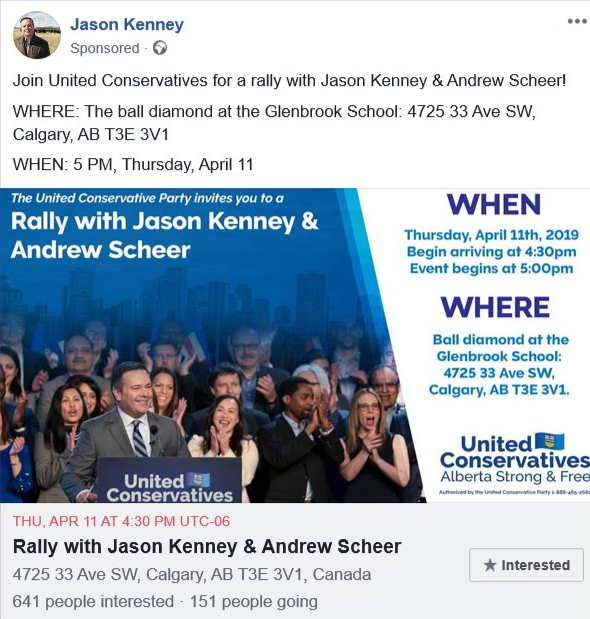 The only non-video ad from Jason Kenney, promoting an upcoming rally with Conservative Party of Canada leader Andrew Scheer.

As we've said before, using location based targeting to promote local events is a very effective way to increase attendance.

You can view all of Jason Kenney's active ads on Facebook here.

The Alberta Party has joined finally joined the Facebook advertising battle. Their strategy is more similar to Jason Kenney and the UCP's, using a diverse set of short video ads.

They are currently running 9 video ads, covering topics ranging from mandatory vaccinations to enhancing Alberta's role in the film industry.