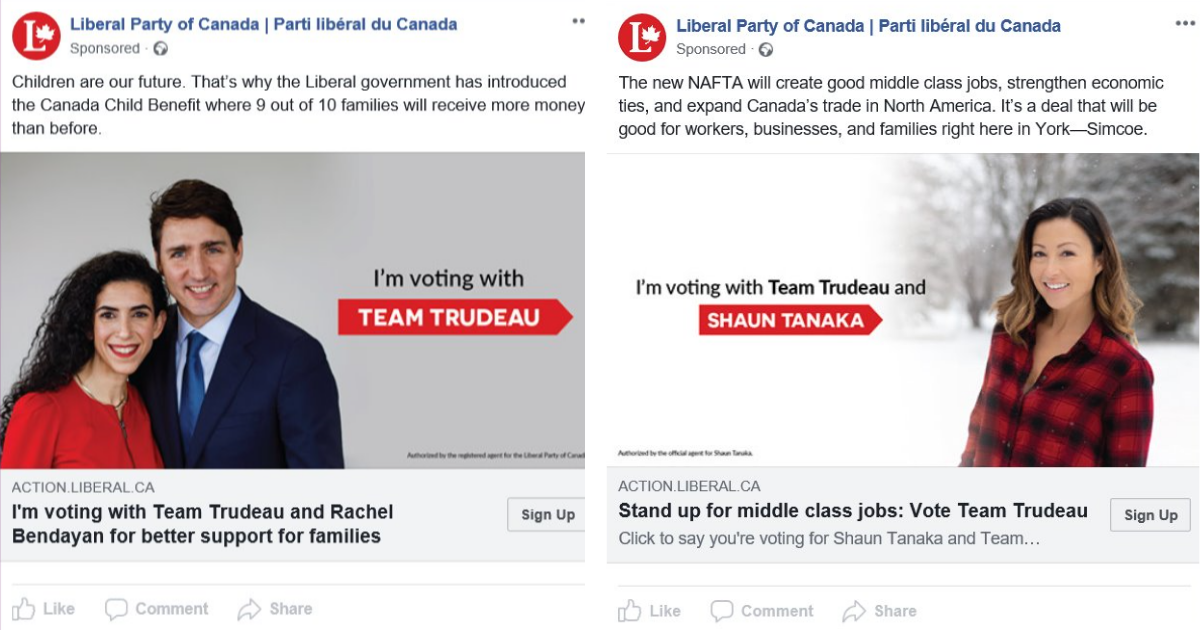 The Liberals are the only party currently running ads for the upcoming byelections in Outremont, York Simcoe, and Burnaby South.

The Conservatives have been focusing on their simple sign up ads, as well as recruiting volunteers for their upcoming "National Super Canvass"

Meanwhile the People's Party of Canada are running a new ad announcing their official registration with Elections Canada, and touting themselves as the fastest growing party in Canada's history.

And for the first time in recent memory, the NDP are not running any Facebook ads this week.

Stay up to date with all of the Facebook ads from every major party - check out our ad tracker below!

The Liberals are focused on the upcoming byelections, and are highlighting different issues depending on the riding they are targeting. 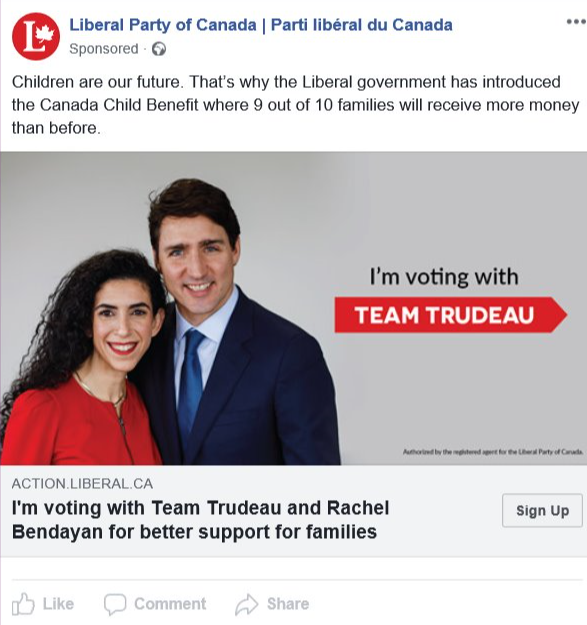 The Liberals clearly feel like their Canada Child Benefit will resonate with constituents in Outremont.

Utilizing location-based targeting like this can be very effective if you know which issues matter most in certain ridings. 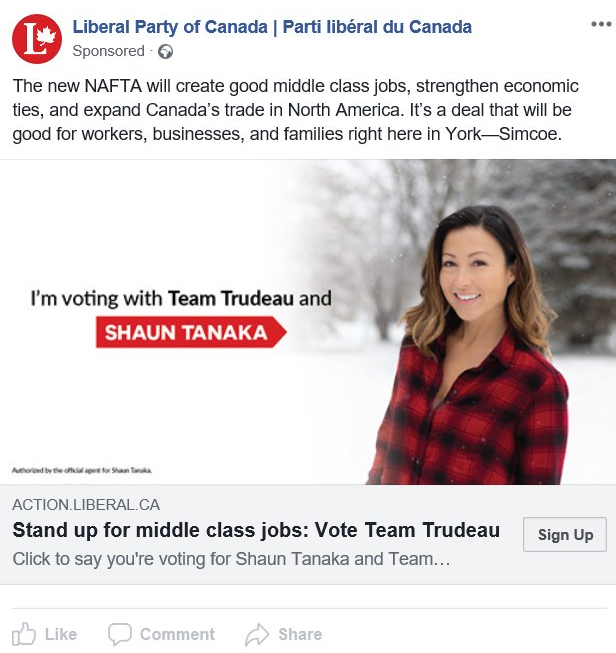 Similarly, in York-Simcoe the Liberals have decided to focus on "the new NAFTA" and middle class job creation. 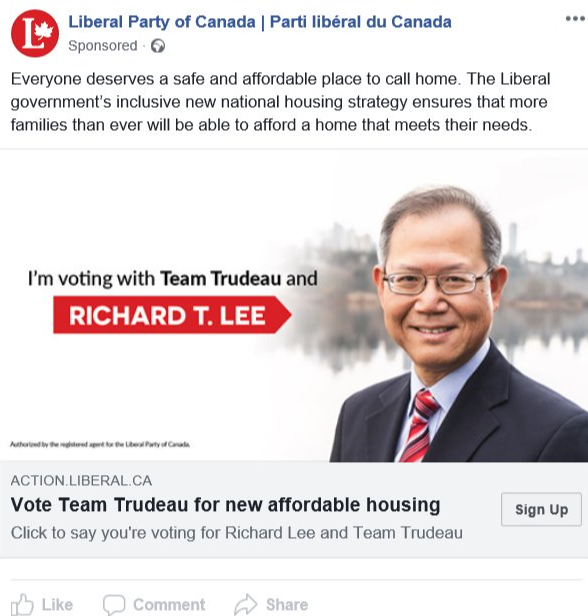 Finally, in Burnaby the Liberals have chosen to focus on affordable housing.

This will be an interesting race as the Liberals take on NDP Leader Jagmeet Singh, who has recently been blasting the Liberals for not doing enough to create affordable housing.

The Conservatives have unveiled new simple sign up ads this week, with new call to action buttons.

They also continue to attack the Liberals on the Carbon Tax, UN Global Compact for Migration, and illegal border crossing, while seeking volunteers for their upcoming "National Super Canvass." 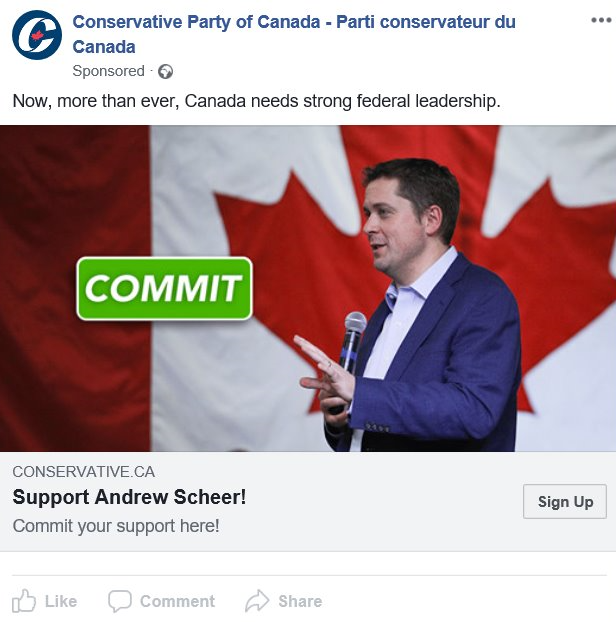 A straight-forward simple sign up ad, with a new "COMMIT" button. The Conservatives are experimenting with a number of new buttons this week, so we are curious to see which will perform best and stick around for the long term. 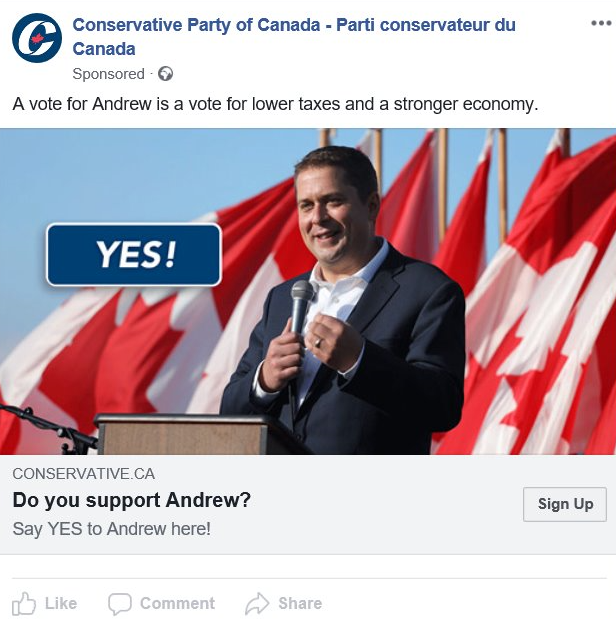 Another simple, effective sign up ad. The Conservatives are doing a good job of refreshing these ads with new copy, new buttons and new background images on a regular basis. 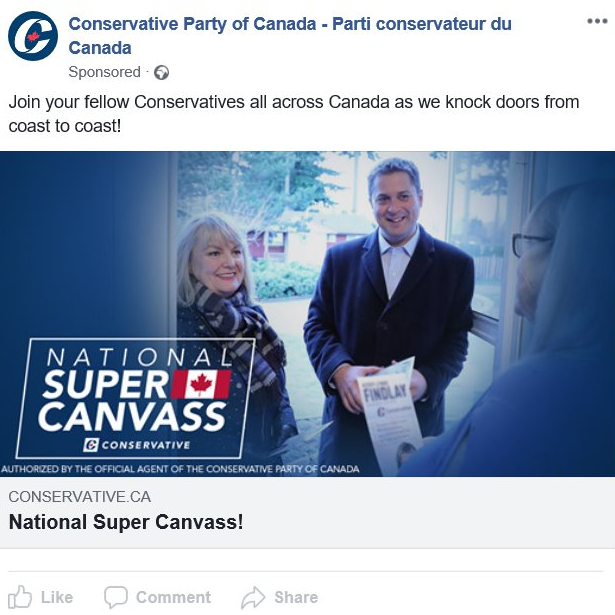 The Conservatives continue to seek volunteers for their nationwide door knocking event coming up on Saturday, February 2nd.

Not only will this ad provide them with a base of volunteers for the event, but they will gain an email list of dedicated supporters who they can retarget for volunteer events and fundraising in the future.

The PPC is proud to announce their official registration with Elections Canada, and the fact that they are the fastest growing party in Canada's history. 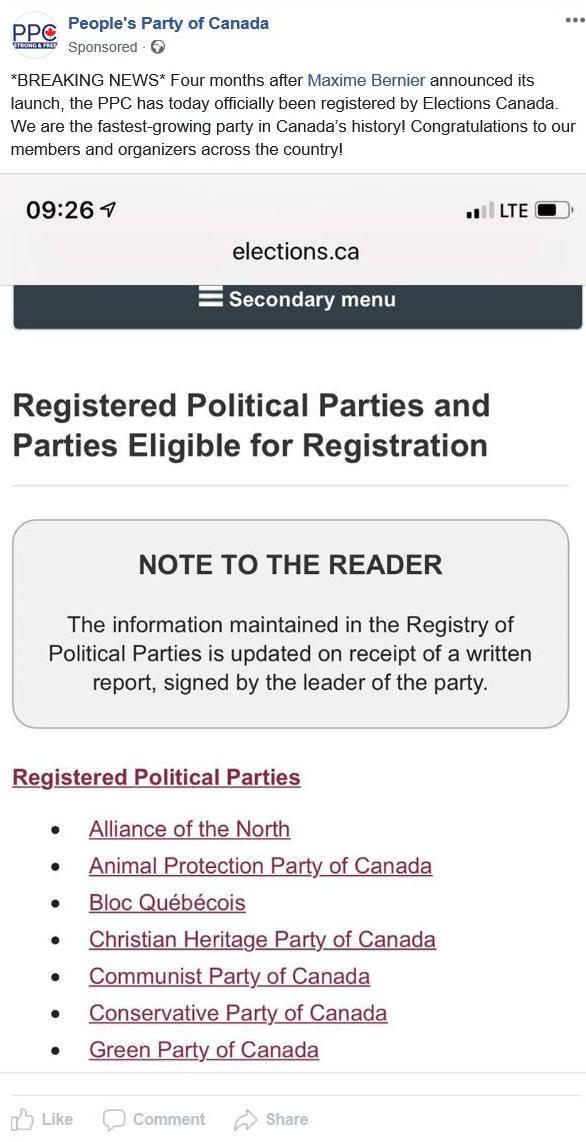 Unfortunately the bottom of their screenshot gets cut off on desktop view and doesn't actually show the PPC on the list, but you get the idea.

You can view all of the active People's Party of Canada ads here.