One political party is on fire. One is testing out a new theme. Another is falling behind.

Can you guess which one’s which? Check out this week’s edition of the Political Party Ad Tracker to find out the answer.

This is a surprising development from the social media savvy Liberal Party.

The reason for the Liberal ad freeze is unimportant. What’s important is that they’re falling behind, and the Conservatives are gaining an online advantage because of it.

Last week was all about the ethical judgment of Justin Trudeau and Bill Morneau.

This week maintains that theme, but includes fresh ad copy on a variety of other key Conservative issues, a sleek introductory Scheer ad, and an interesting job opportunity. 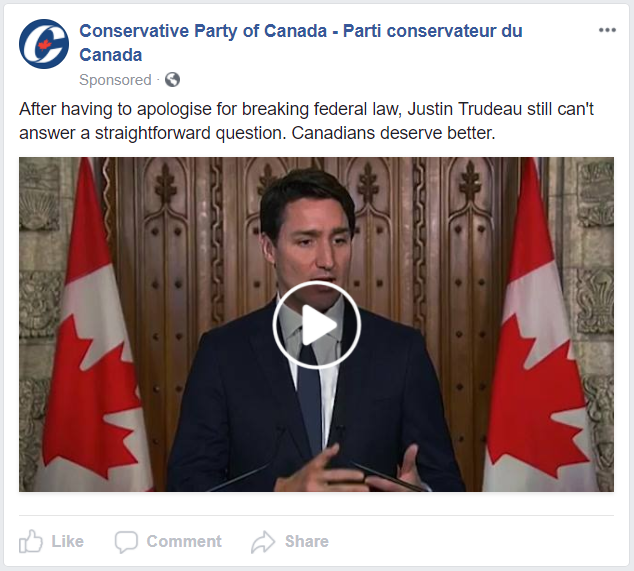 This is a unique ad. It is not designed to obtain e-mail addresses or donations. It is designed to build a narrative.

The Conservatives posted the same video to their Facebook page awhile back, and generated the best engagement on a post they have had in a long time.

Clearly, the message resonated. It is only logical that they are seeking to expand the reach of the message—which contributes to their narrative of poor Liberal ethics—to reach new potential voters. 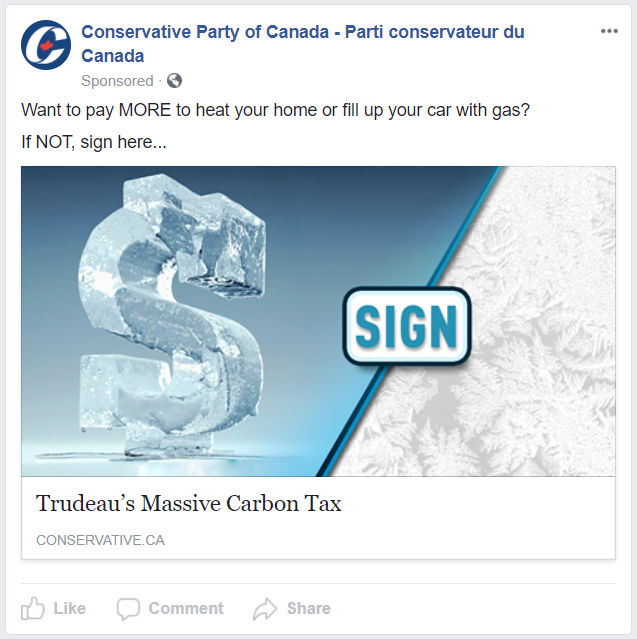 Stop the tax on everything!

This ad is creative. The imagery and messaging align well.

We won’t be surprised if the Conservatives collect quite a few e-mails from this ad. 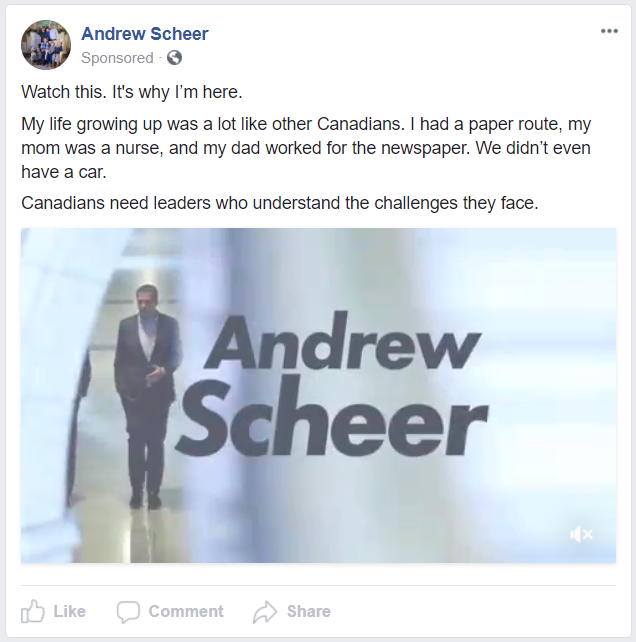 Scheer is an unknown commodity on the federal stage at this point. He knows that and has stated his 2018 goal is for Canadians to get to know him.

This ad is exactly how we would have advised him to start the year off. It tells Scheer’s story in a compelling way, on a platform people are on.

The next step should be more key issue ads from Scheer’s page that define him as a leader, and allow the party to grow through obtaining supporter e-mails. 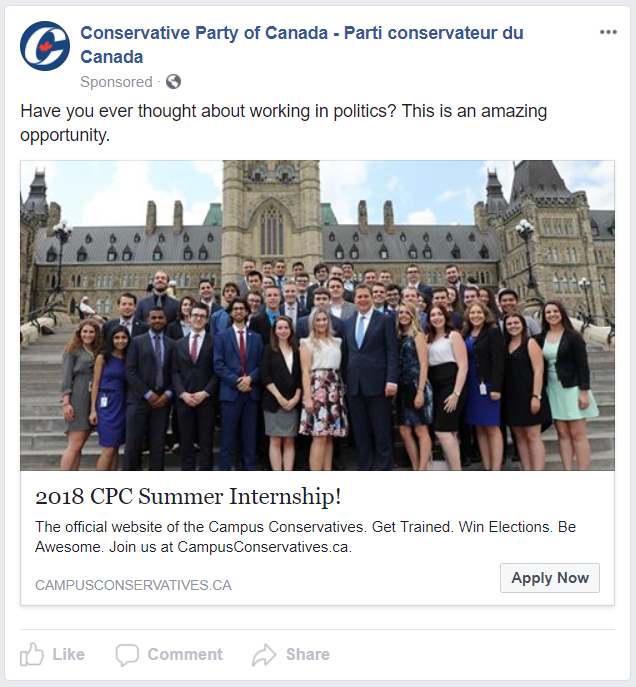 Want to work for the Conservatives? Now’s your chance!

This is the first time we have seen a political party promote a job position using a Facebook ad.

Interesting recruitment tactic. Perhaps we’ll see more of this in the future as parties seek to broaden their talent base. 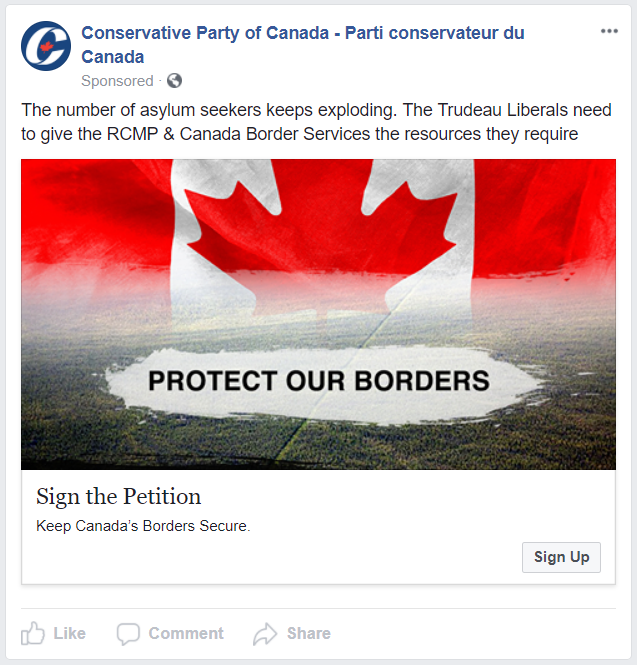 The NDP remain in a testing phase.

There is a pattern emerging. Each week is about a different key issue from the last.

This week is focused on income inequality. 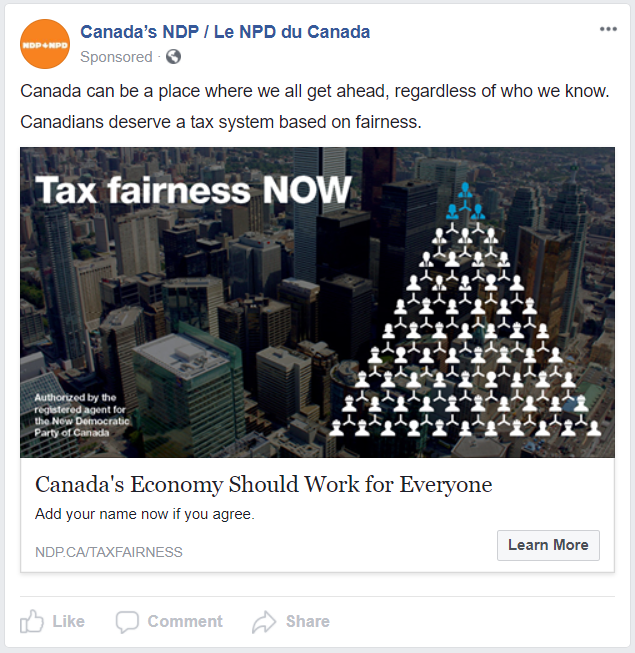 This ad is an effective visualization of how the NDP views the “income inequality” issue.

The messaging is in line with NDP Leader Jagmeet Singh’s theme of inclusivity.

The call-to-action is persuasive. Let’s see if this theme survives the NDP testing phase. 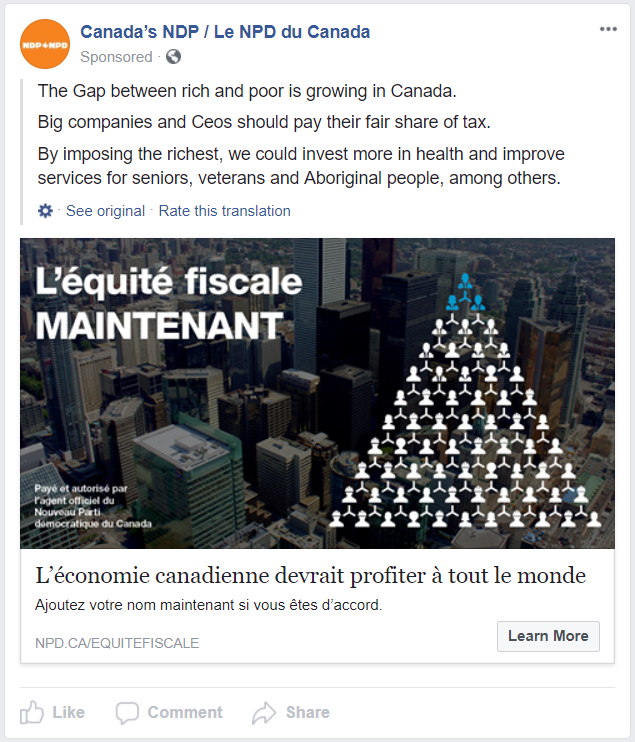 Here is a split-test of the same ad, running in French.

The NDP are continuing to run the most French ads of any political party—by far.

Don’t expect this trend to change—Quebec is crucial to the NDP’s 2019 hopes. 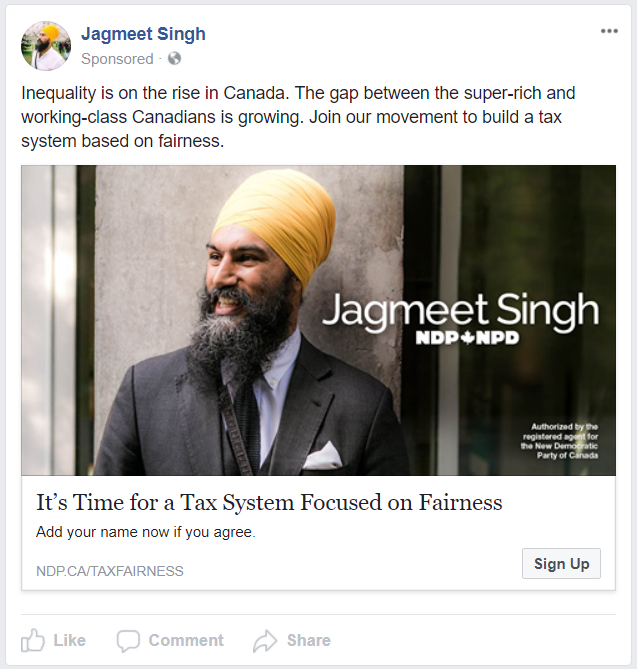 This is a good way of infusing the new leader’s brand with that of the party itself.

The image used is obviously favoured by NDP strategists, as they continue to deploy it with multiple messages. 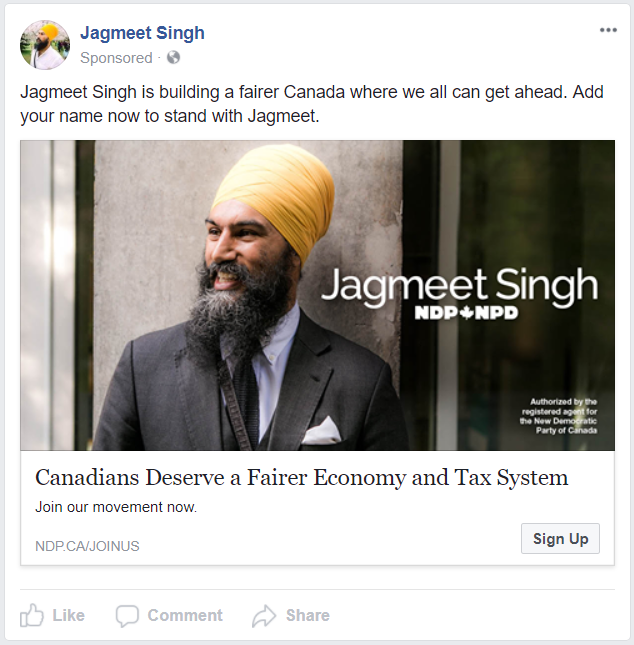