The Liberals are back and with a force!

After two weeks of no Facebook ads, the Liberal Party has rebounded with quality ads focused on their upcoming convention, and growing their e-mail list. 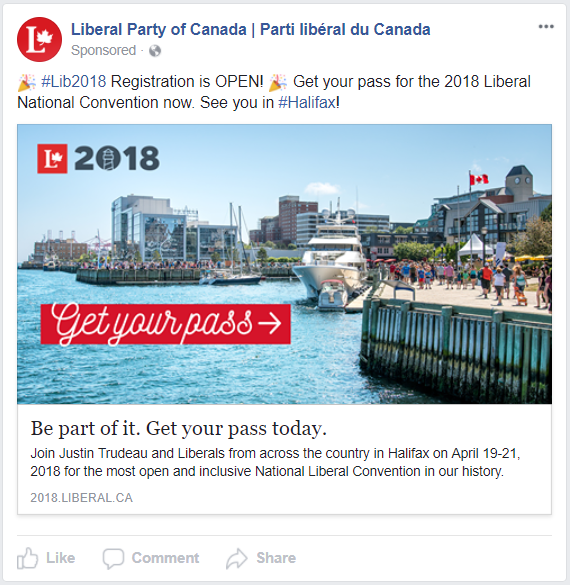 This is one of the aesthetically pleasing, split-tested ads the Liberals are running to promote their upcoming convention in Halifax.

Not only is the visual on-point, but so is the caption. Emojis, capital letters, hashtags—you can’t miss this one. 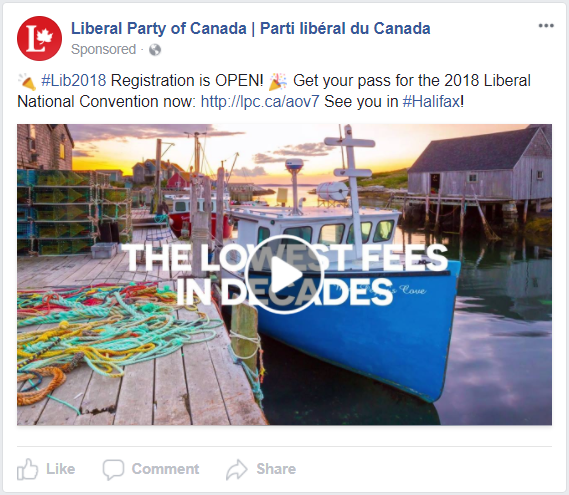 This video ad is professionally shot, visually appealing, and delivers pertinent information in a concise and entertaining way.

After watching this ad, it is hard to imagine any Liberal not wanting to register for their convention. 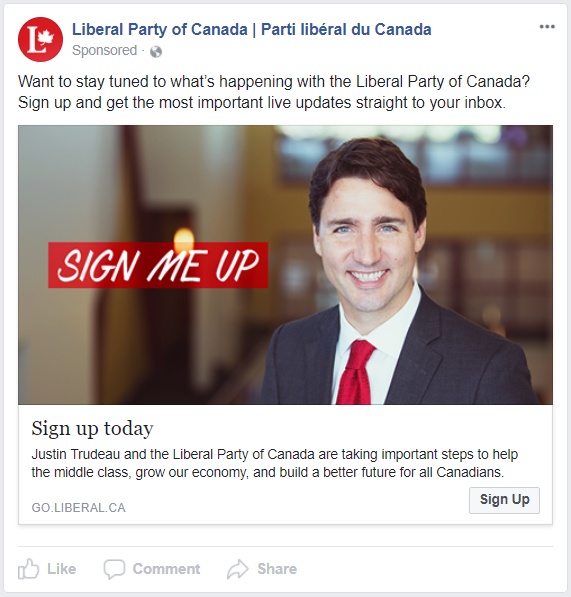 E-mail addresses are like gold in the political world. You can use them to identify supporters, promote or test messaging, and fundraise.

This is a characteristic ad for the Liberal Party under Justin Trudeau—simple and engaging with a clear, compelling ask.

Ads like these are characteristic for a reason. They work. 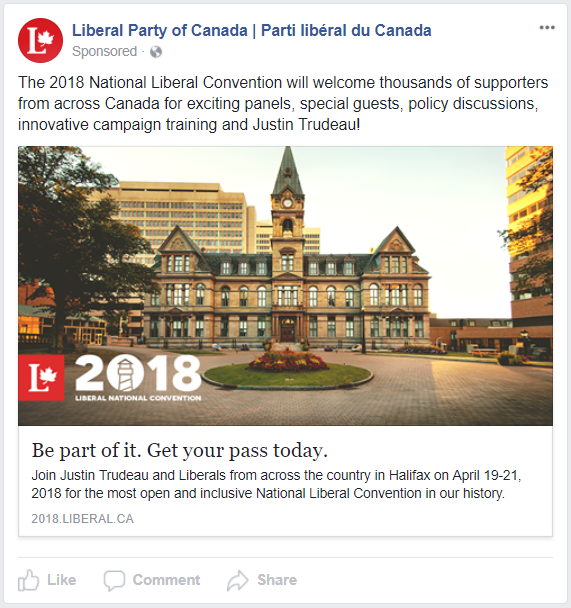 The Conservatives are keeping the pressure on—though at a reduced pace this week.

For the third week in a row, the Conservatives are focusing their online efforts primarily on the ethics issue. They are testing out a few different key issue ads as well.

Good news for those interested in a job—Internship hiring ads are still running! 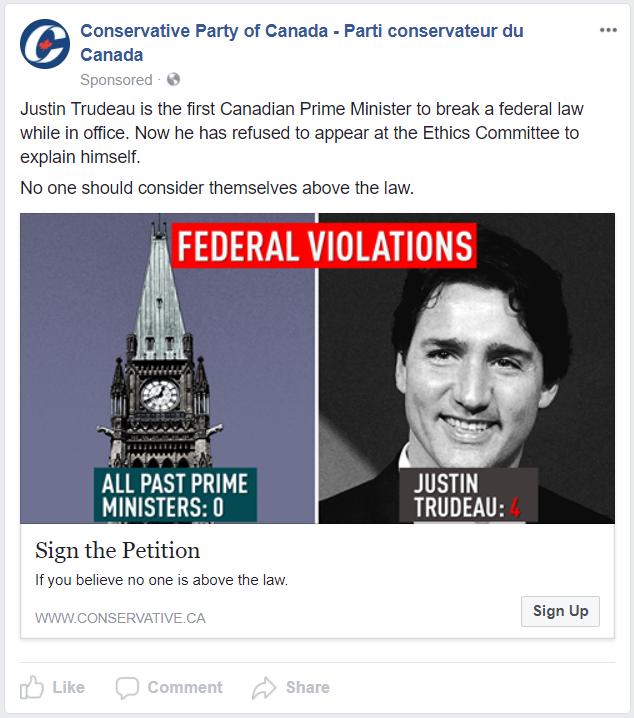 This is effective messaging and delivery.

The Conservatives have really done a great job building a potent narrative online that Justin Trudeau and his government are unethical.

Maybe these ads have contributed to their recent uptick in the polls? 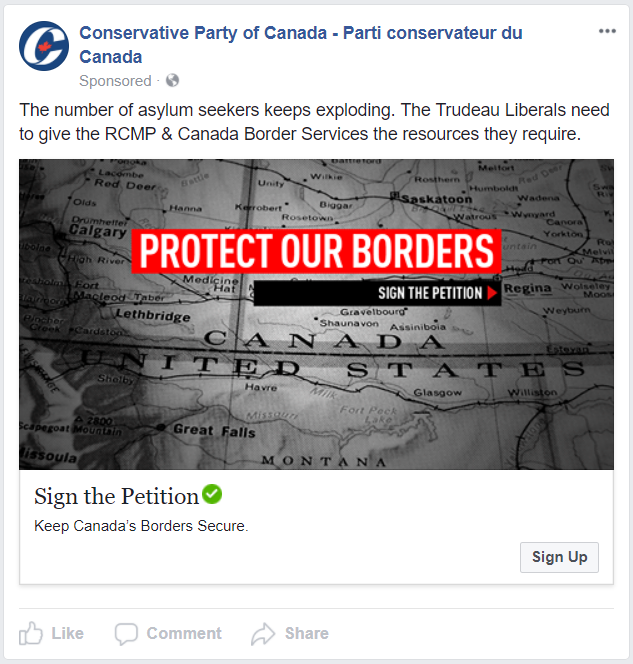 Always a winning message for the Conservative base.

This ad is well done and should resonate. 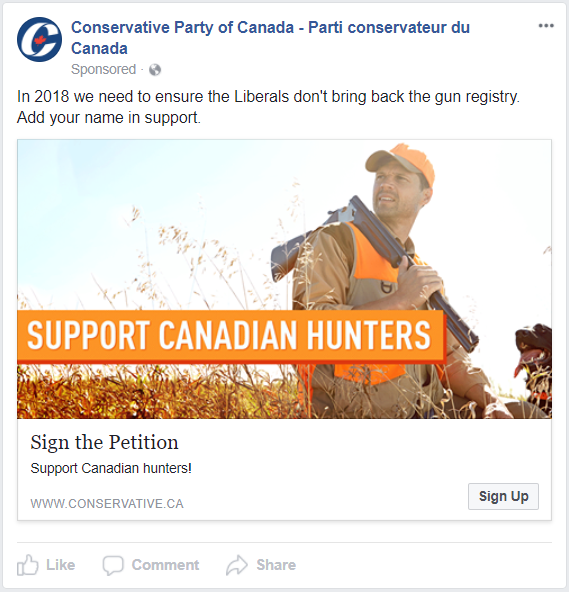 Hunters have been the most hyper-targeted group by Conservative ads in recent weeks.

Bright orange is a new colour for the Conservative Party to use.

Let’s see if it gets results. 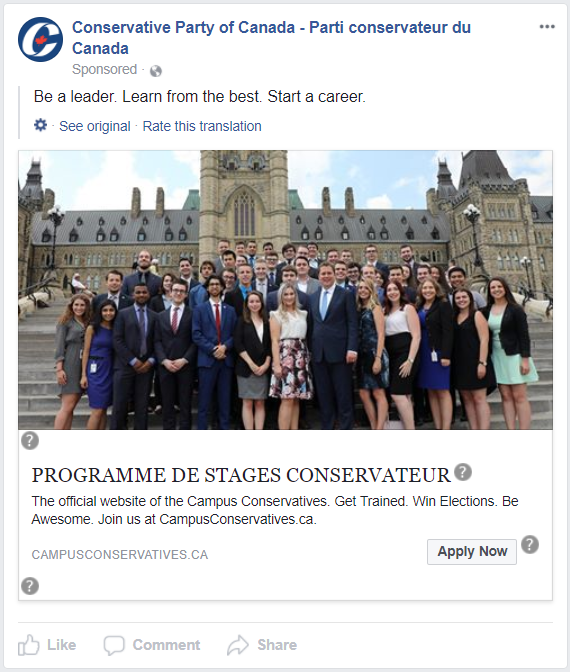 The NDP is in full convention mode.

Check out how they’re promoting their first convention under new leader Jagmeet Singh! 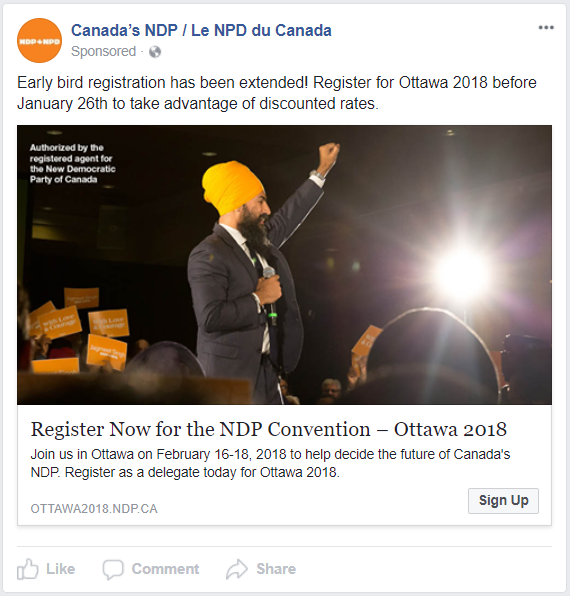 Don’t miss out on the early bird deal!

This is a strong visual for a party highlighting its leader at a convention that desperately needs to generate more buzz around the party.

Hopefully the visual resonates because the NDP is using it for every single convention ad the party’s page is running. 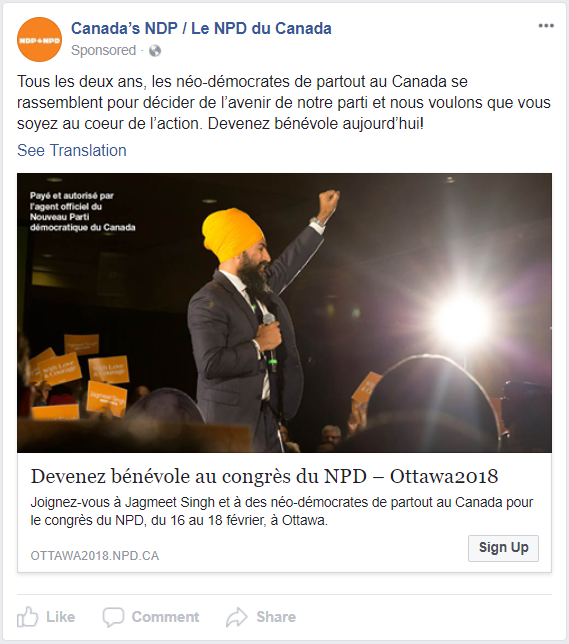 This French ad is focused on signing up volunteers for the convention. The ad is also being run in English with split-tests.

The NDP seems hung-up on the idea of using Facebook ads to find and mobilize volunteers. We don’t get it. Recruiting party volunteers via Facebook is often difficult and lacking an adequate ROI.

That being said; a volunteering opportunity at a party convention that is otherwise costly might be enticing. Facebook advertising, like most things, is situational. Let’s see if the NDP is properly reading the situation, or just wasting money. 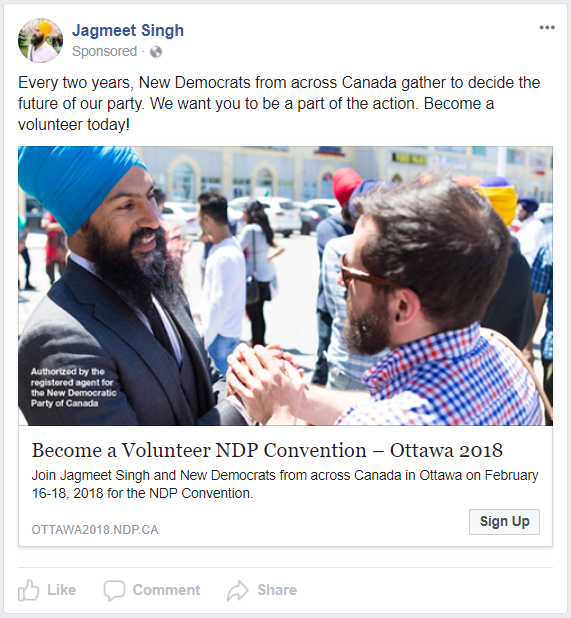 The visual here—run on Singh’s personal Facebook account—highlights his ability to connect with people.

It also suggests, psychologically, that the convention will be an inclusive, friendly event.

Convention 2018 will be crucial for the NDP. They must demonstrate that the party has momentum heading into the 2019 election. Our recommendation to the NDP is to ramp up online advertising on the convention to get as many supporters out as possible. 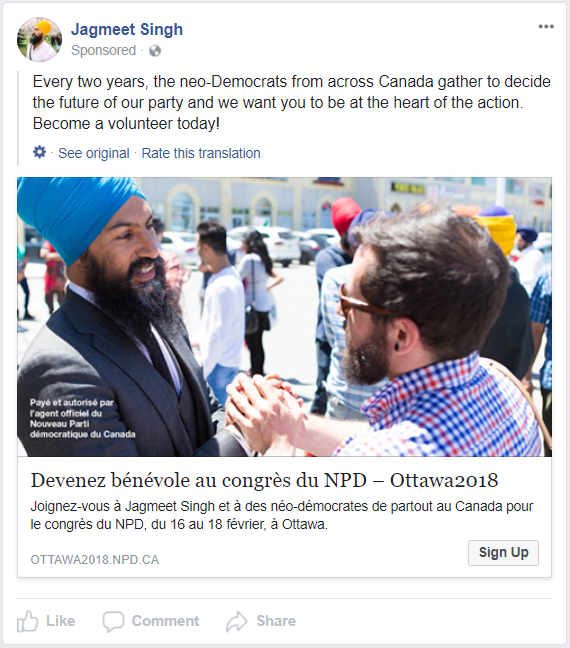