Canada’s political parties are asking supporters for a lot this week: money, convention registrations, and e-mails. They are running fresh ad copy to do it, too.

Check out this week’s edition of the Political Party Ad Tracker to see each party’s online strategies and tactics!

The Liberals are running a ton of ads this week.

All ads being run are either meant to: 1) grow the e-mail list or 2) boost registration numbers for the upcoming Liberal convention. 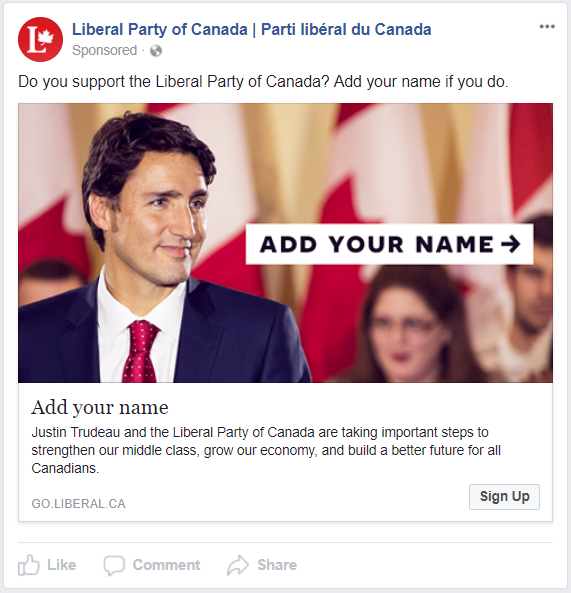 The image and colour scheme used here are new, but the ad’s style is not.

A flattering image of the Prime Minister, a caption enticing support, a call to add your name, and an embedded blurb about strengthening the middle class have all become hallmarks of a Liberal ad designed to capture your e-mail address.

This is an effective strategy. How do we know? Because we run similar ads for our clients and get amazing results. 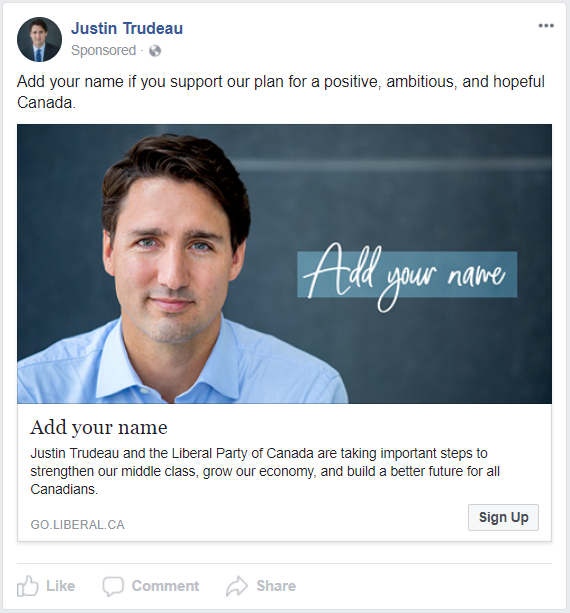 This ad is a split-test employing the exact same strategy as above.

Note that this one is being run on Trudeau’s personal Facebook page, which will ensure it is seen by more people given his massive following.

There is an element of authenticity when such ads are run on a leader’s personal account. How can you say no to the Prime Minister when he’s personally requesting your e-mail address? 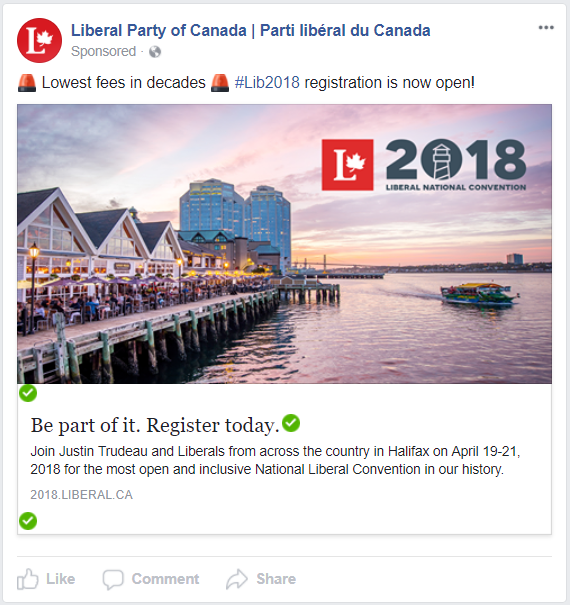 If I’m a motivated Liberal Party member looking at that beautiful view, I would certainly be considering attending this convention.

Wait. The fees are also the lowest in decades? How can I say no?

The Liberal digital team has done a great job branding and selling their upcoming convention. We won’t be surprised if these ads run right up until registration ends. 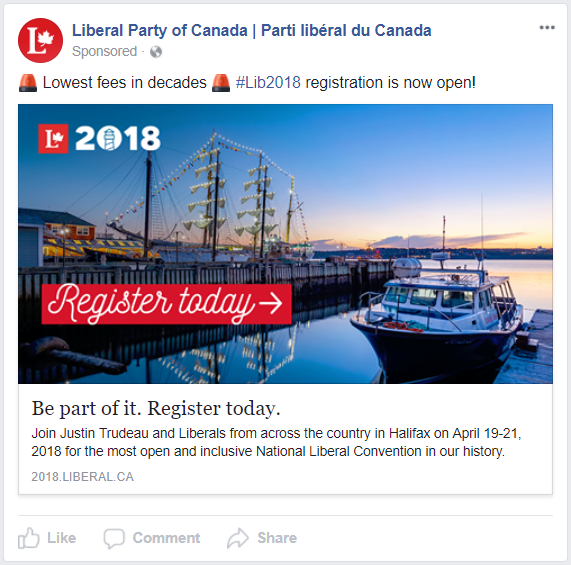 The Conservatives are keeping pace with the Liberals in terms of quantity of ads being run—they do not want to cede any ground online.

Although the Conservatives are continuing the ethics narrative, this week is all about Andrew Scheer and filling the war chest. 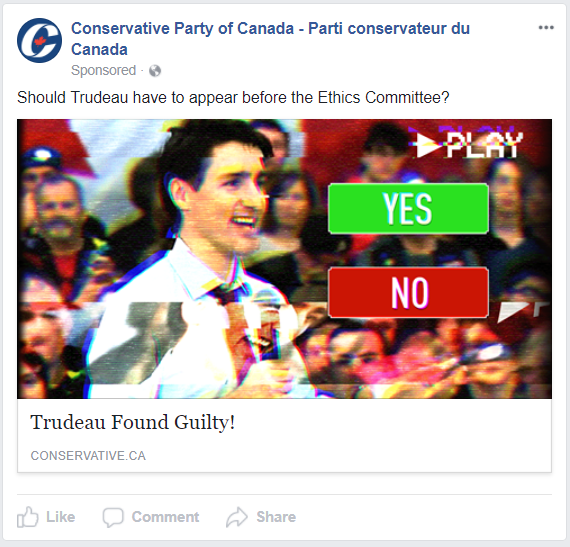 Interesting imagery here. The image will capture attention. It successfully suggests that Trudeau is a broken record on ethics.

Curiously though, the Ethics Committee has already decided not to question Trudeau.

The Conservatives clearly don’t consider this issue to be resolved. 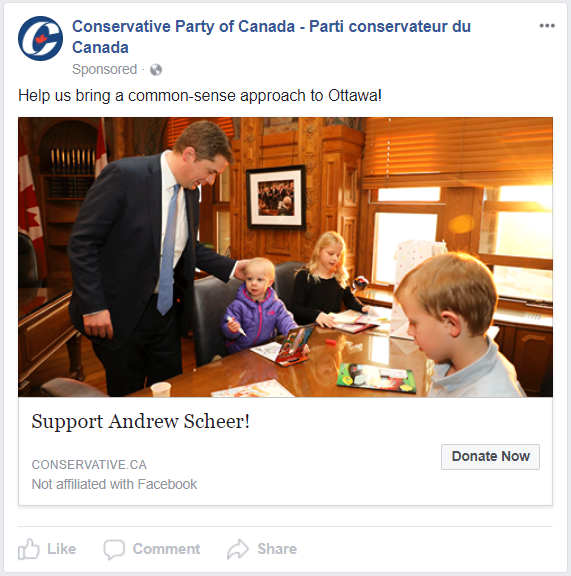 This is the first ad of multiple split-tests aimed at highlighting Andrew Scheer and raising money.

Scheer is a family man. That’s a big part of his brand. This ad confirms as much.

It’s important to note that the Conservative Party is the only party fundraising online right now. The Conservatives are the best at raising money, but how much do their online donations contribute to that success?

Enough to justify running several fundraising ads more than two months away from an end-of-quarter—at the very least. 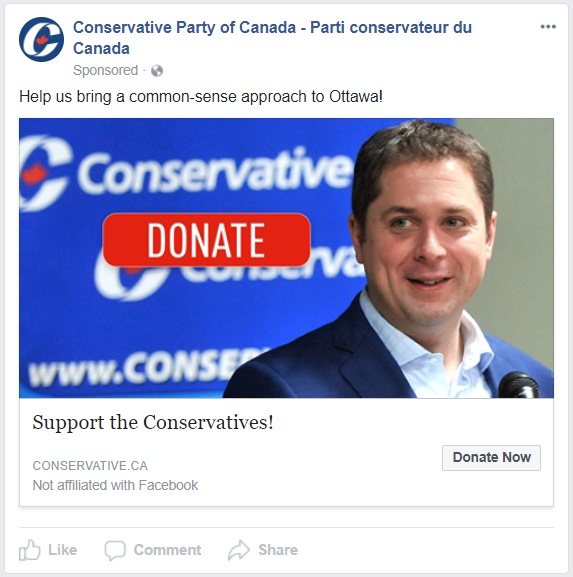 It doesn’t get more straightforward than this.

Our guess is that these ads are being targeted as much as possible to previous donors and loyal party members.

Sometimes, people just need to be reminded that they want to give you money. Especially if they think the government lacks common sense and you have it. 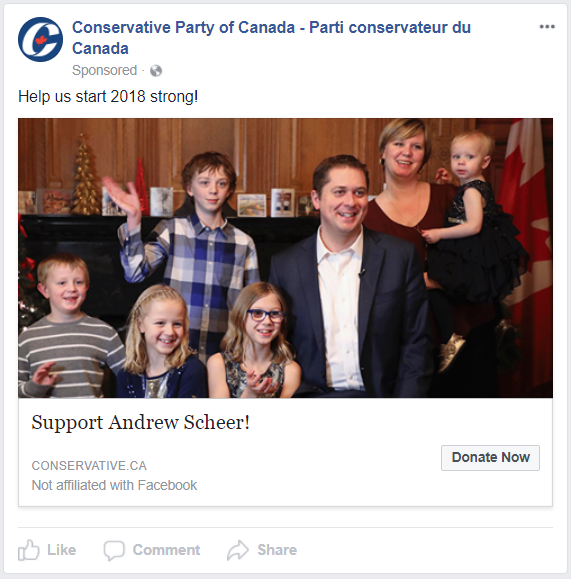 They’ve changed it up this week by shifting their focus from recruiting volunteers for the convention to registering delegates.

This is a smart move. Now let’s see how the NDP is promoting their first convention under Jagmeet Singh! 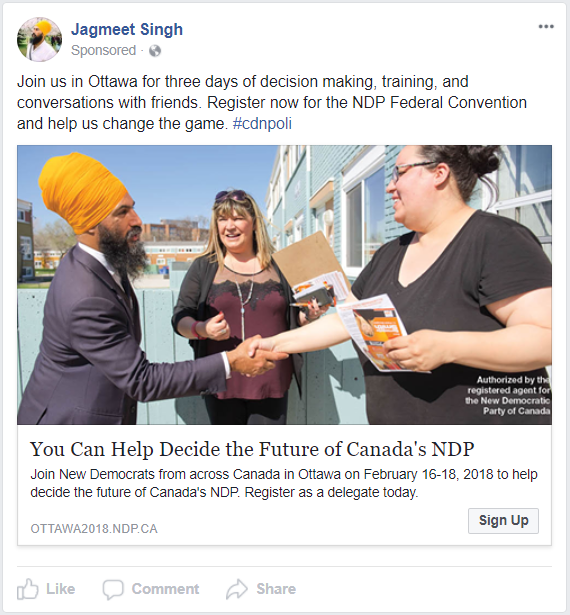 This ad is strong.

The image is appealing and will make the ad stand out in a newsfeed. The messages “change the game” and “decide the future” are effective.

Let’s see if this ad can help generate some buzz around an NDP convention that desperately needs it. 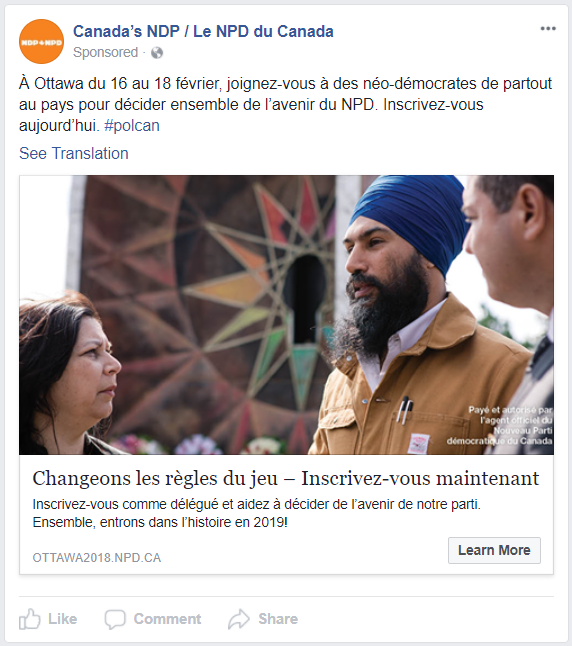 It has become standard practice for the NDP to run half their ads in French, and half in English. They continue to run far more French ads than the other parties.

Although the visual here is also strong, we would have increased the brightness a touch to make it stand out. The ad’s messaging is on point. 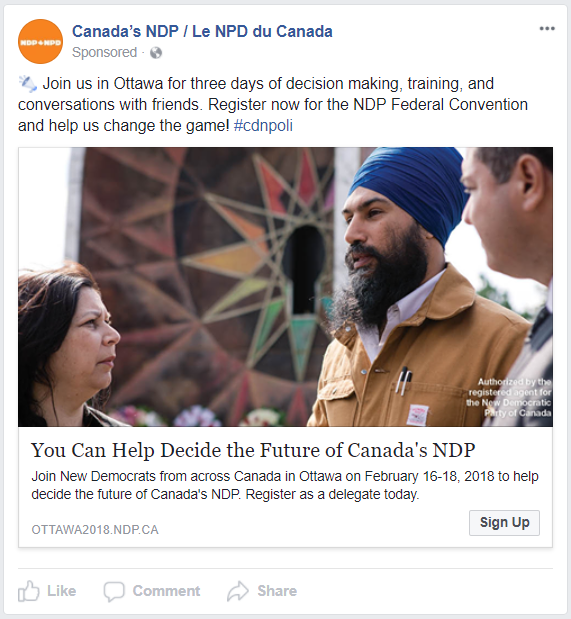