The cold seems to have affected the online ad game of some political parties.

Find out who cooled down and who heated up in this week’s edition of the Political Party Ad Tracker.

For the first time in ad tracker history, the Liberals are running NO ADS THIS WEEK.

This is surprising, given the Liberals’ stellar online ad game.

If the Liberals keep their ads in the deep freeze, they could be eclipsed by the smoldering Conservatives.

The Conservatives have started 2018 hot.

They are focusing their online ads this week on the ethical judgment of Justin Trudeau and Bill Morneau.

Could we be witnessing the start of a campaign narrative here? 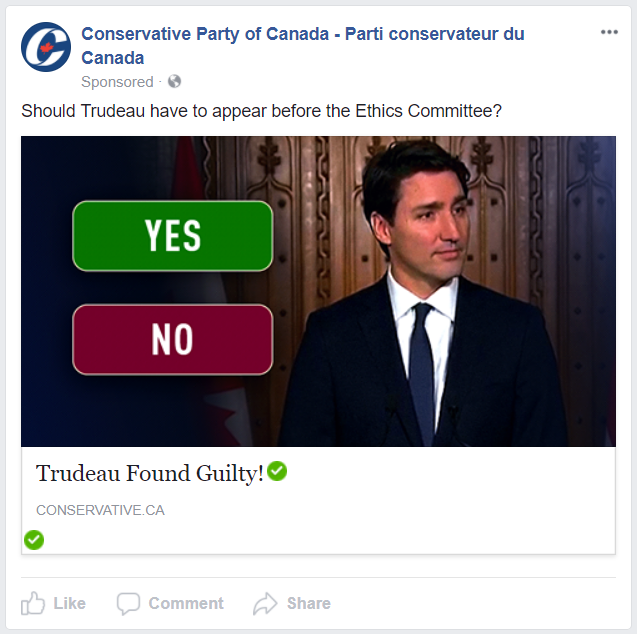 This is a great ad. It’s engaging. You almost need to click and respond. And once you do, the Conservatives instantly obtain your e-mail.

We expect this ad will be run as long as the Conservatives continue their push for Trudeau to appear before the Ethics Committee about his private island vacation. 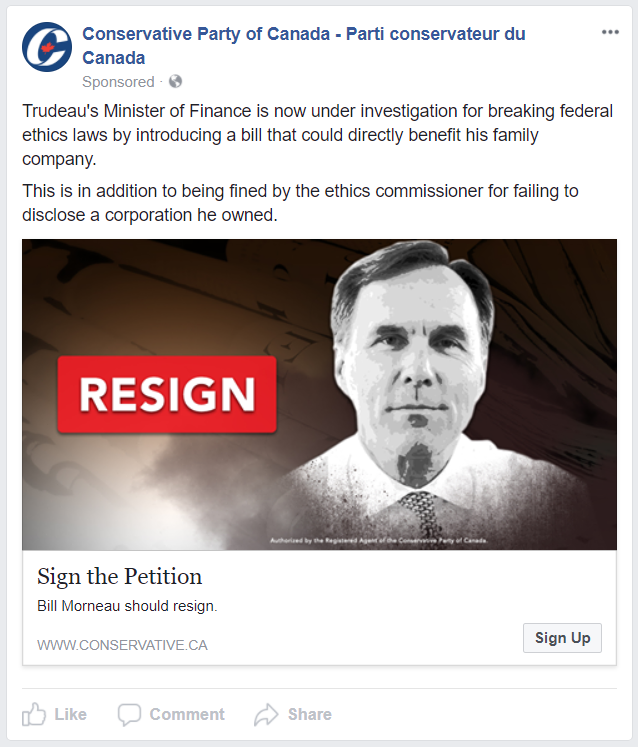 You can almost hear Pierre Poilievre’s voice in this ad.

The Conservatives are using the alleged ethical violations against the Prime Minister that are in the news to remind voters of the Finance Minister’s additional violations. That is a smart way to build a cohesive narrative. 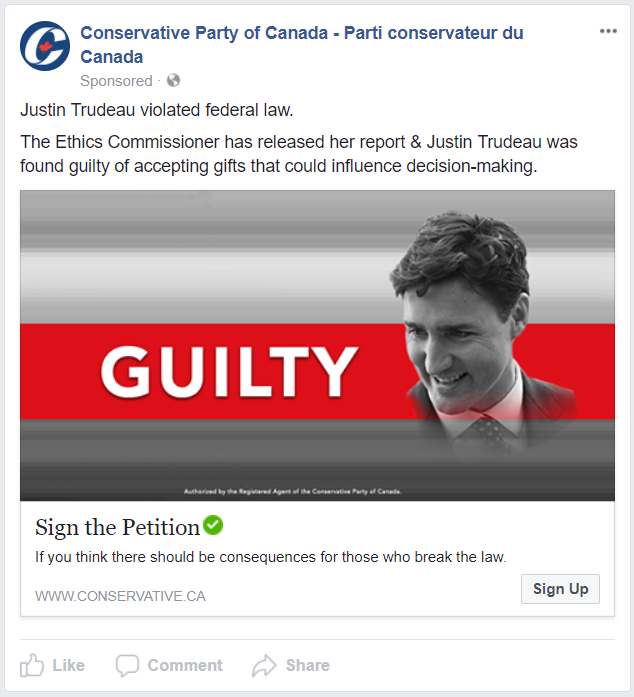 This one has some shock value. What is the Prime Minister guilty of!?

These ads, run in combination, provide a potent return-on-investment for the Conservatives.

Not only are the Conservatives obtaining e-mail addresses alongside issue tags, but they are testing possible campaign messages for voter resonation—at a low cost. 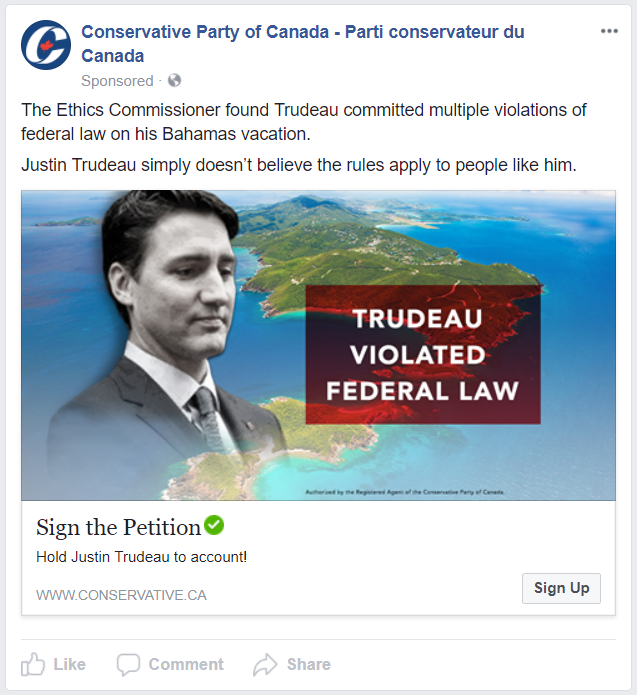 The NDP are back to key issue ads.

This time, they are focusing on gender equality—using only one split-tested ad. 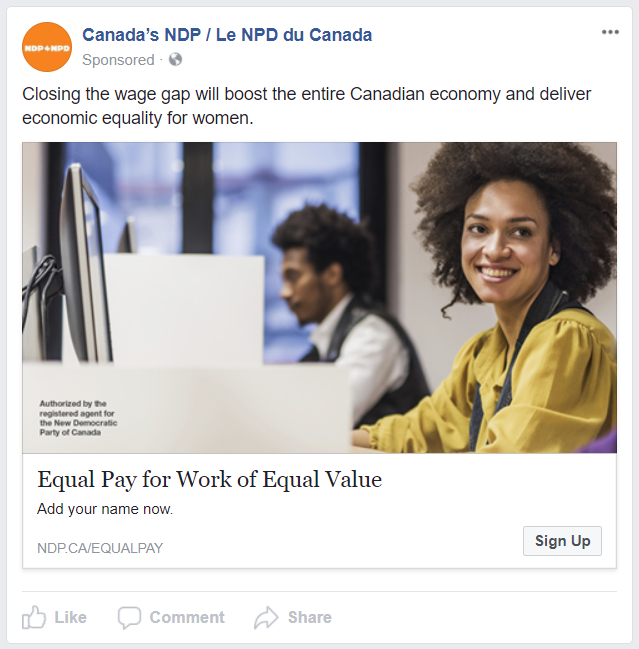 Who can be against equal pay?

This ad is straightforward and succinctly delivers a message that should resonate particularly with women—a voter group from which they desperately need growth. 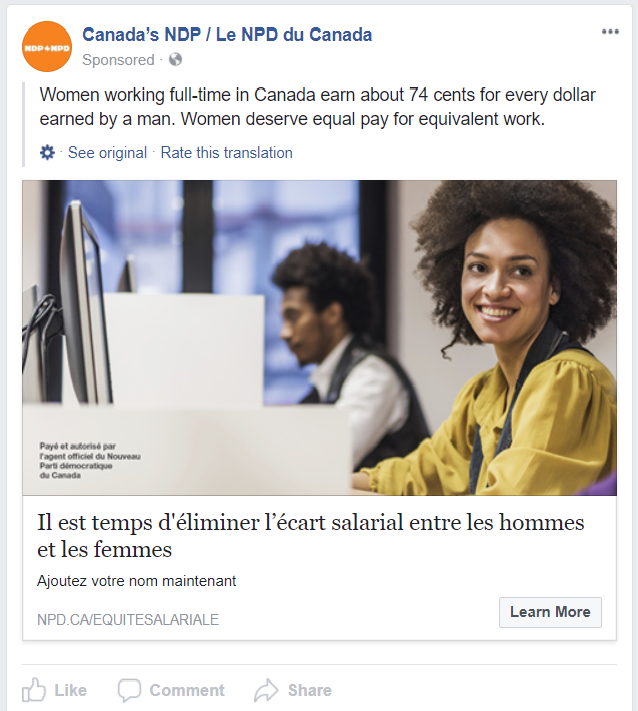 Here is a split-test of the same ad, running in French.

In recent weeks, 50% of the NDP’s ads have been in French. That is a much higher percentage than the Liberals or Conservatives.

Based on the NDP’s ad game of late, don’t expect the NDP to give up on their Quebec base in 2019.