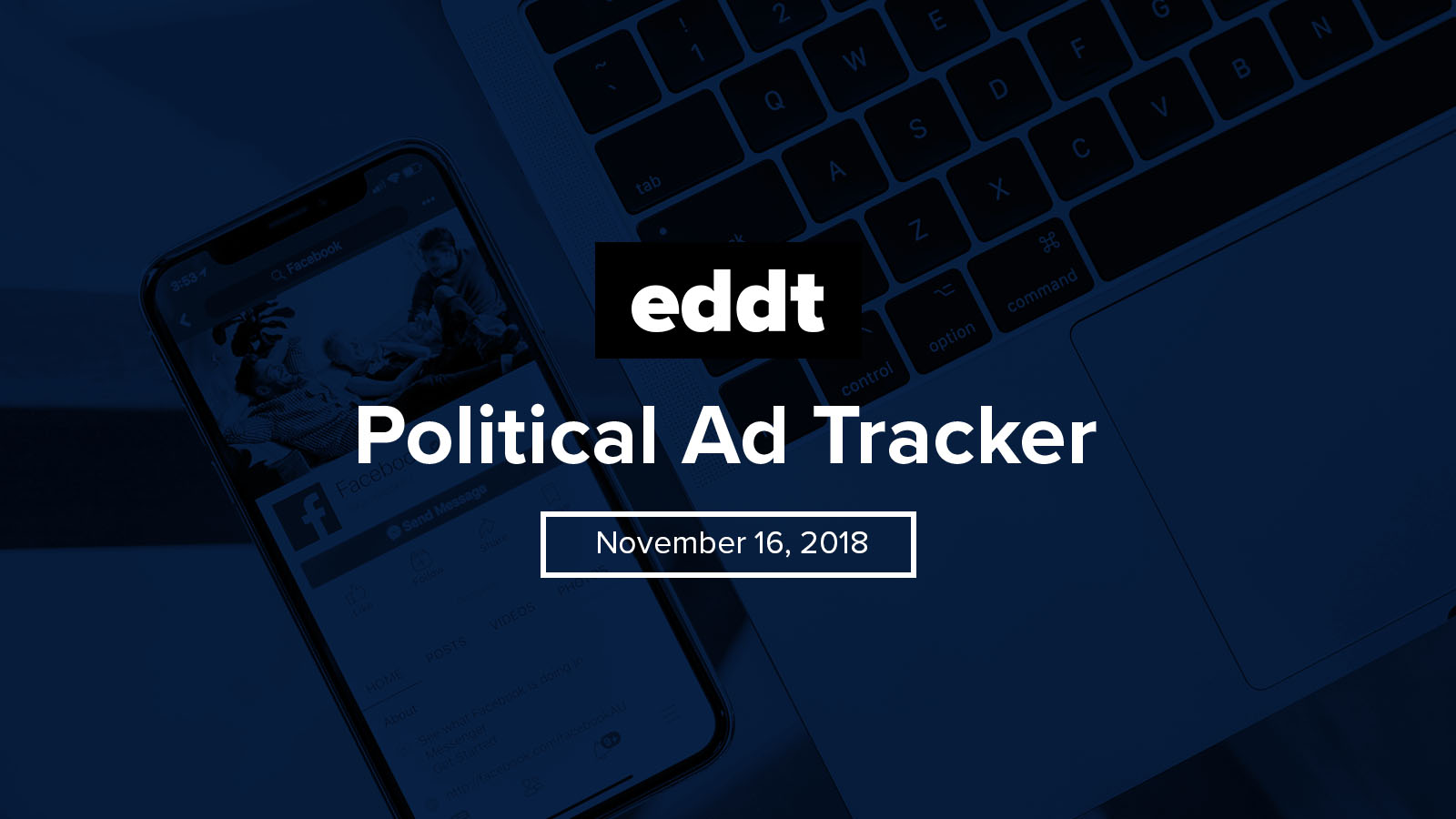 A total overhaul from the NDP this week as they roll out 32 new Facebook ads!

Meanwhile the Liberals continue to focus on the upcoming by-election in Leeds-Grenville–Thousand Islands and Rideau Lakes.

The Conservatives have no new ads this week - they continue to attack the carbon tax and returning ISIS fighters.

The NDP have completely revamped their Facebook ads campaign this week.

They appear to be focusing on issue-based sign up ads to grow their email list while attacking Liberal policies. 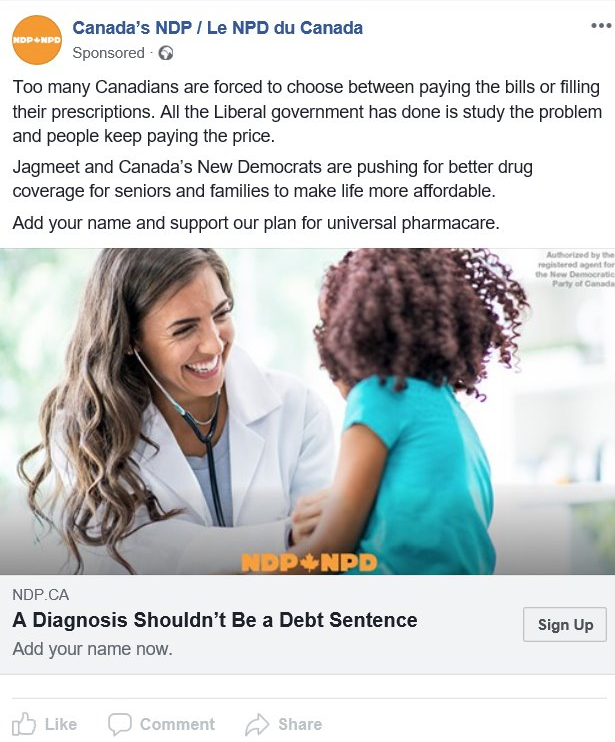 This ad focuses on the NDP plan for universal pharmacare.

With Facebook's targeting tools these ads can be directed at the target audience - families and seniors. 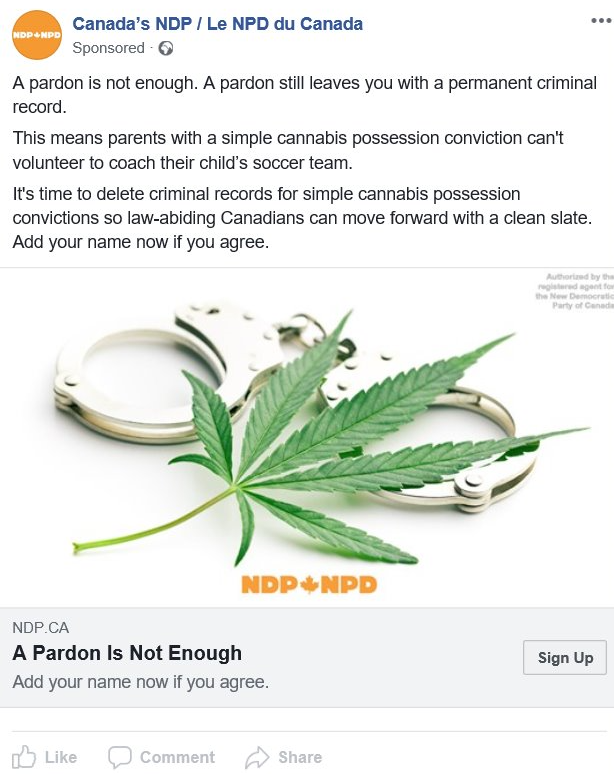 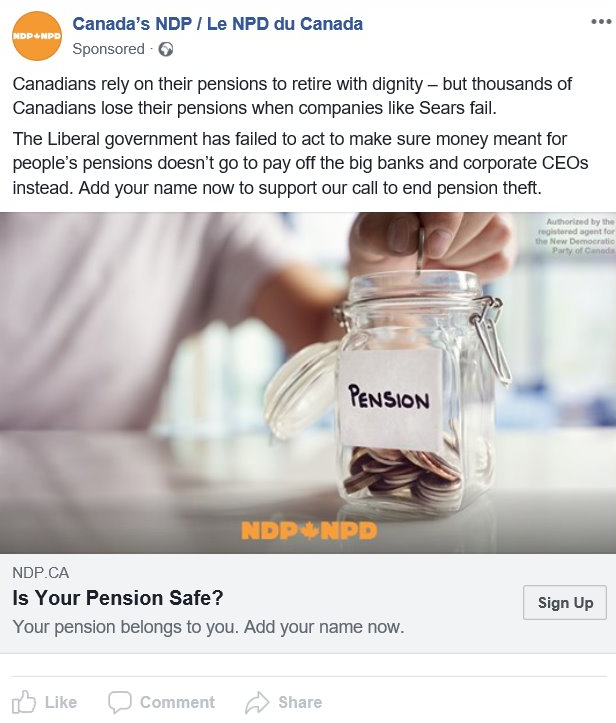 "Is your pension safe?" - this headline uses the fear factor, and is an effective way of getting viewers to pay attention to the ad. 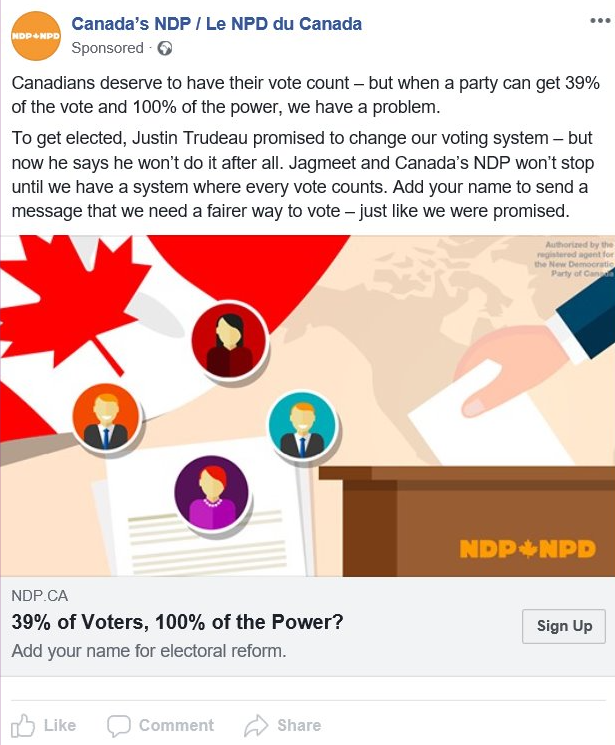 With this ad, the NDP are going after voters who were disappointed when Justin Trudeau broke his promise on electoral reform.

Another solid new ad from the NDP - a clean, eye-catching graphic, an attention-grabbing headline, and a clear call to action. 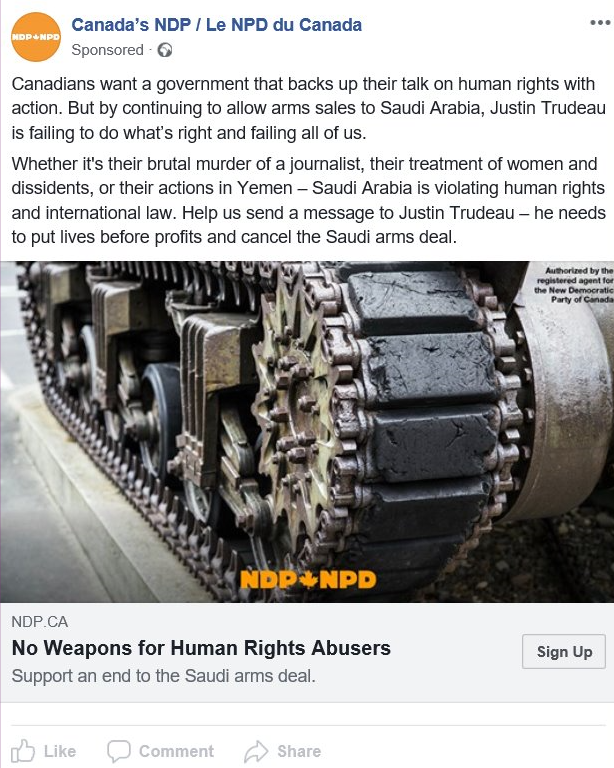 One more hard-hitting ad from the NDP, this time calling out the Liberals for providing arms to Saudi Arabia.

The ad graphic and headline to a good job of capturing the viewers attention, increasing the likelihood that they will actually read the ad copy and possibly sign up.

The Liberals have doubled down on by-election ads this week. The images are the same but they have some fresh ad copy.

In total they are now running 18 by-election ads. 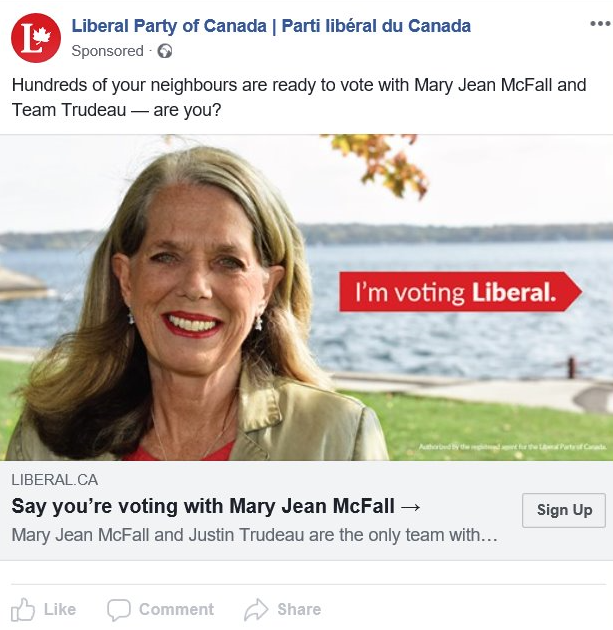 The Liberals are running 6 variations on this ad image, each with different ad copy.

Their strategy is diverse, as some of the ads focus on local candidate Mary Jean McFall, while others put the focus on Trudeau and national policies. 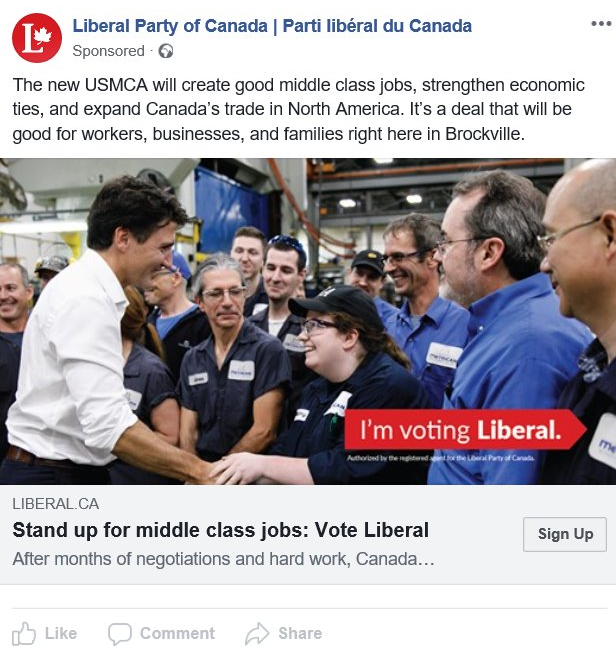 "right here in Brockville." - The Liberals appear to be doing a better job of localizing their by-election ads than the Conservatives. 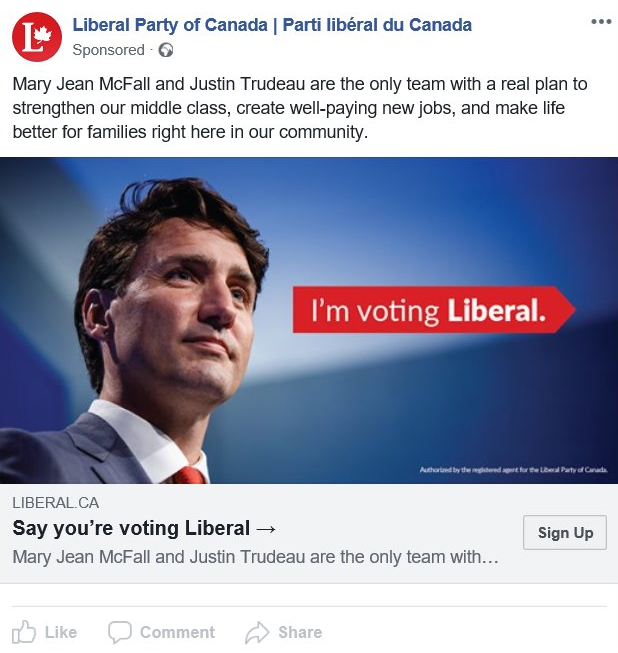 Another example of the Liberal by-election ads.

This one puts the focus on Justin Trudeau rather than local candidate Mary Jean McFall.

Nothing new from the Conservatives this week, but on a positive note they continue to run some French-language ads.

In the past they have frequently been the only party to neglect to do so. 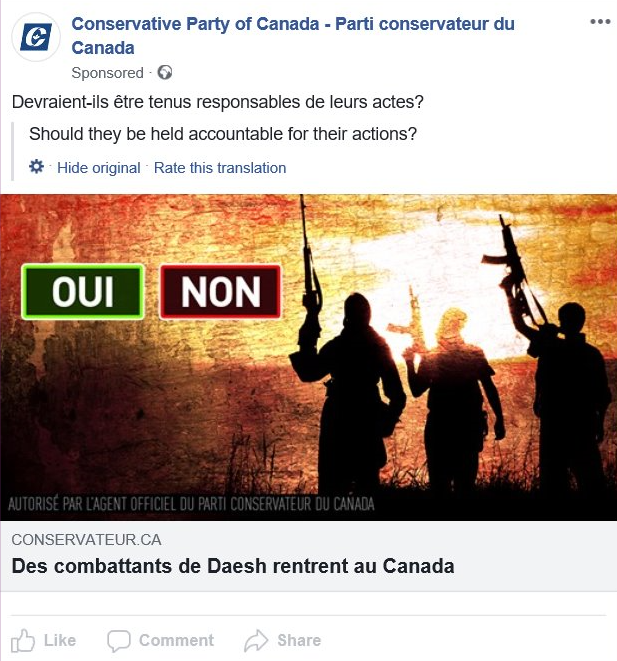 The Conservatives are not running all of their ads in English and French, but they are pushing the issue of returning ISIS fighters.

They must feel that this issue in particular will resonate with French voters. 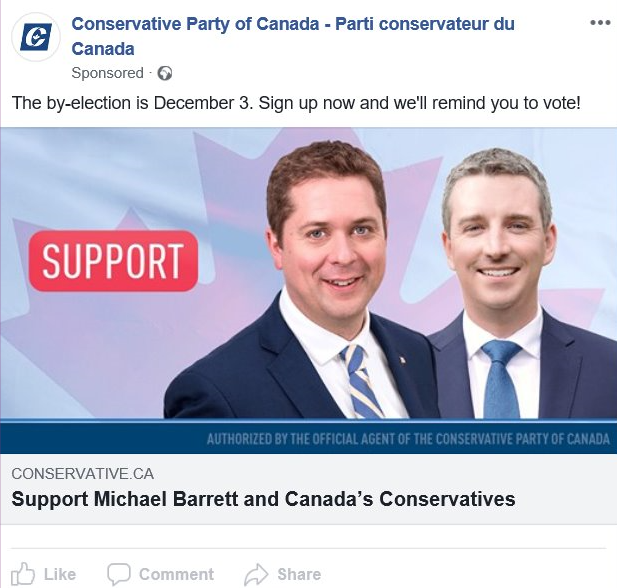 An example of the Conservative by-election ads.

They have chosen to go with a "support" button on the ad image itself, and decided not to use Facebook's built in "sign up" button beside the headline. 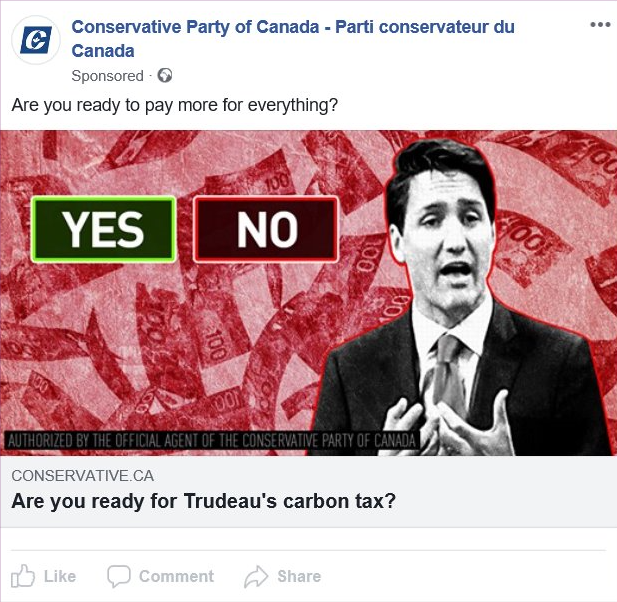 The goal of this ad is to get viewers to sign up if they oppose the carbon tax, thereby growing and segmenting the email list.

However the call to action isn't as obvious as we have seen on previous ads - there is no clear ask to "sign up" or "fight the carbon tax."

This is an interesting strategy, since typically you want to include a clear and simple call to action so that people know what to expect when they click.