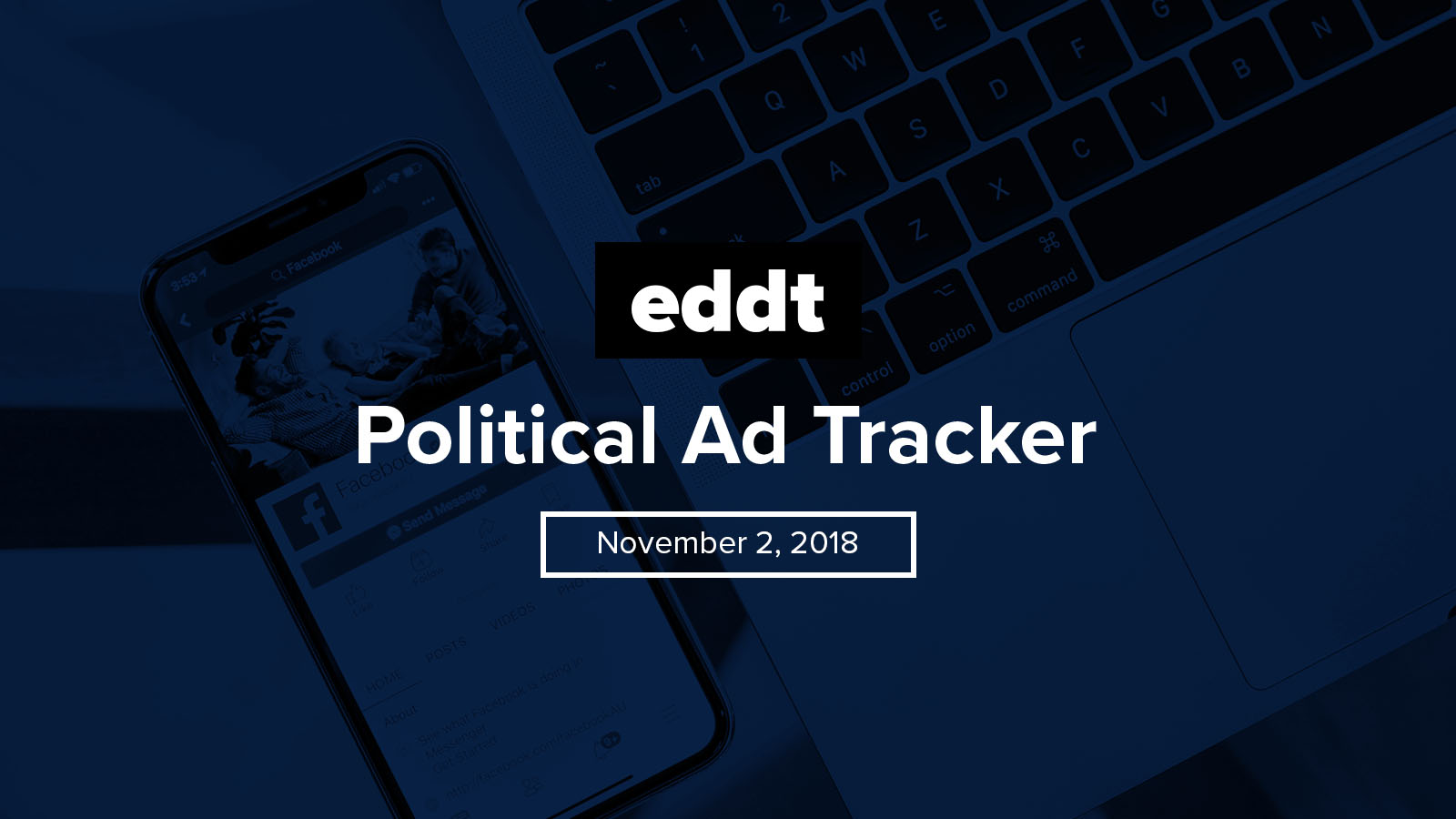 The Liberals are making the biggest moves, rolling out their "victory fund" to raise money for the upcoming election.

Meanwhile the Conservatives are attacking the Liberals on illegal border crossing and returning ISIS fighters.

And the NDP are also on the offensive, accusing the Liberals of playing "political games" by not calling by-elections in Outremont, York-Simcoe and Burnaby South.

The Conservatives have unveiled several new ads this week.

The first ad calls for support in opposing the "reintegration program" for ISIS fighters. 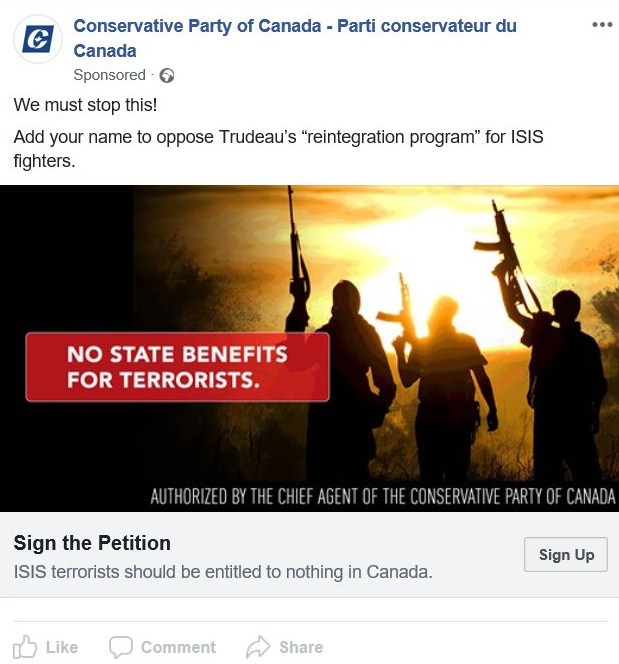 As we have said before, petition ads like this are useful for segmenting your audience and growing your email list. Those who sign up can be retargeted with similar ads on the same issue. 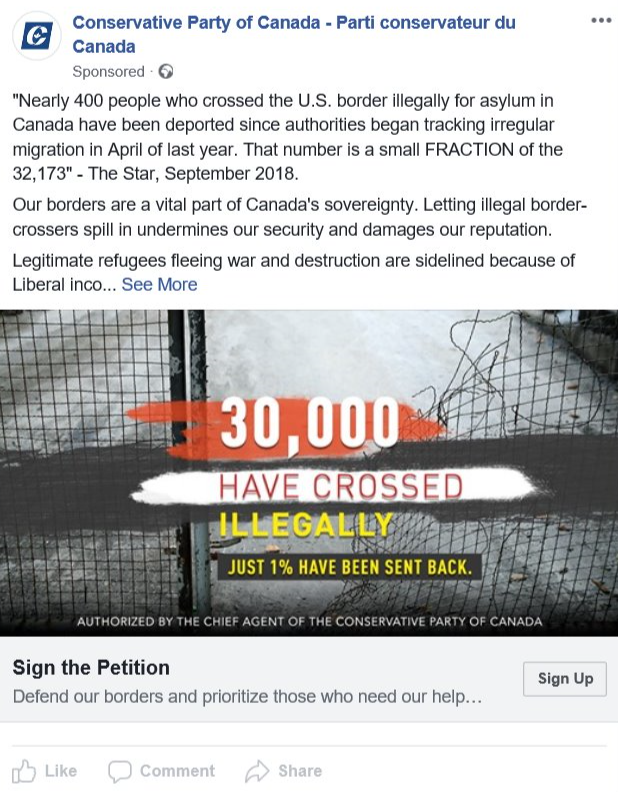 Although the description is quite lengthy, the ad image is effective in quickly conveying the message.

This petition will again help the conservatives to grow and segment their email list, and gain support among those concerned with illegal border crossing. 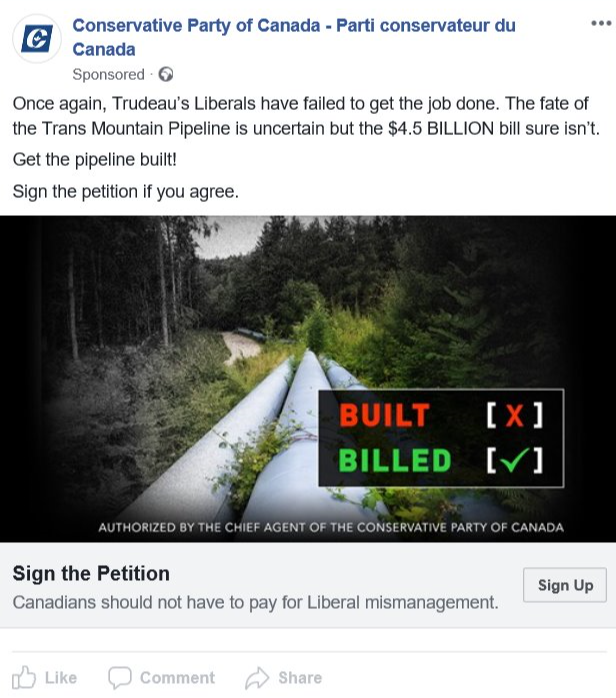 Another new petition ad from the Conservatives, this time focused on the Trans Mountain Pipeline.

Much better messaging in the description on this ad - "Get the pipeline built!" - short and simple messaging like this is highly effective.

The Liberals are gearing up for the election with a new "victory fund" campaign. 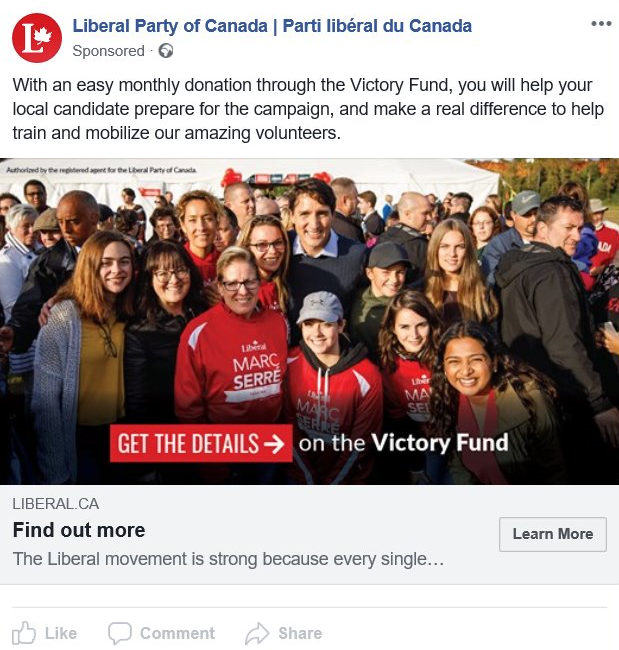 A good call to action should be clear and convincing.

Asking people to "get the details" and "learn more" rather than asking to "donate" or "chip in" may muddle the message.

When you click the link, you aren't even asked to donate - you are asked for your contact info so that the Liberal Party can "follow up with more details on the Victory fund!"

The Liberals are testing a softer approach here, and it will be interesting to see if it is effective. 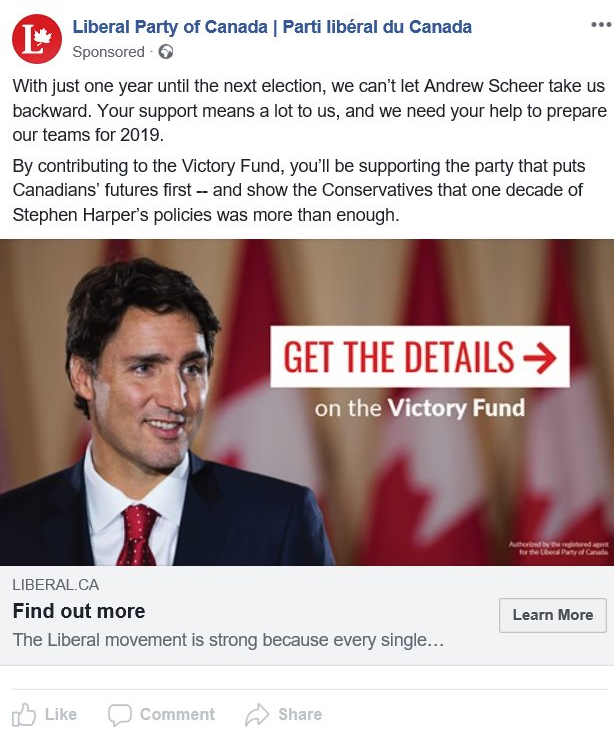 This ad may suffer for all of the same reasons as the ad above.

If you want donations, typically you must ask for them, and make it possible for your supporters to donate.

Asking people to sign up to "get more information on the victory fund" so they can donate at a later date is not conventional strategy, so we will have to wait and see how it works for the Liberals. 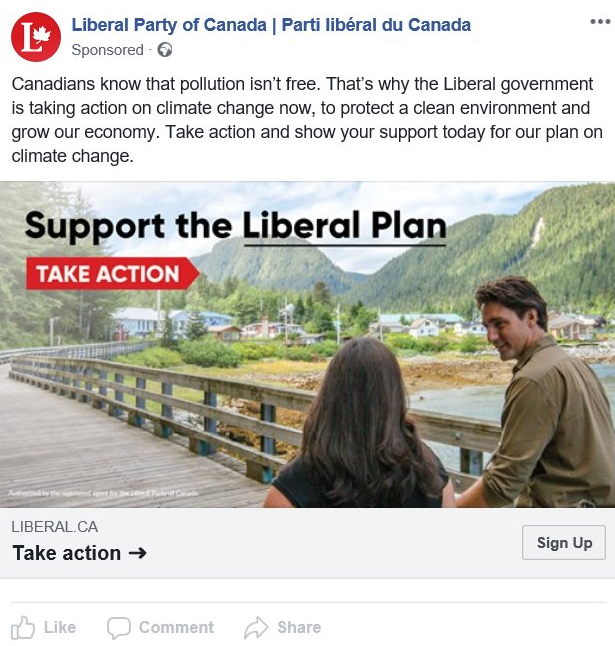 Another risky move by the Liberals as they seek support for the carbon tax.

They intentionally avoid mentioning the carbon tax, instead referring to their "plan on climate change."

Couple this with the underlined "Liberal Plan" from the ad image, and it appears that the Liberals are taking a subtle shot at the Conservatives for not having a plan to deal with climate change. 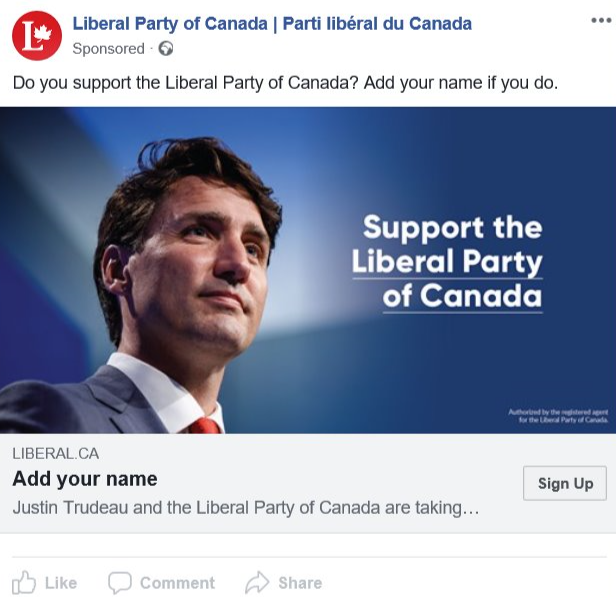 FINALLY - the Liberals have updated their simple sign up ads.

The messaging is exactly the same, but a new image refreshes the old ads, which were getting very stale.

It is important to change the appearance of your simple sign ups at least once a month, as viewers will get tired of seeing the same thing over and over again, and will begin to ignore your ads.

After 3 weeks of running the same ads focused on the housing crisis, the NDP have launched a fresh Facebook ad campaign this week.

They are now focused on the Liberals playing "political games" by not calling by-elections in Outremont, York-Simcoe and Burnaby South. 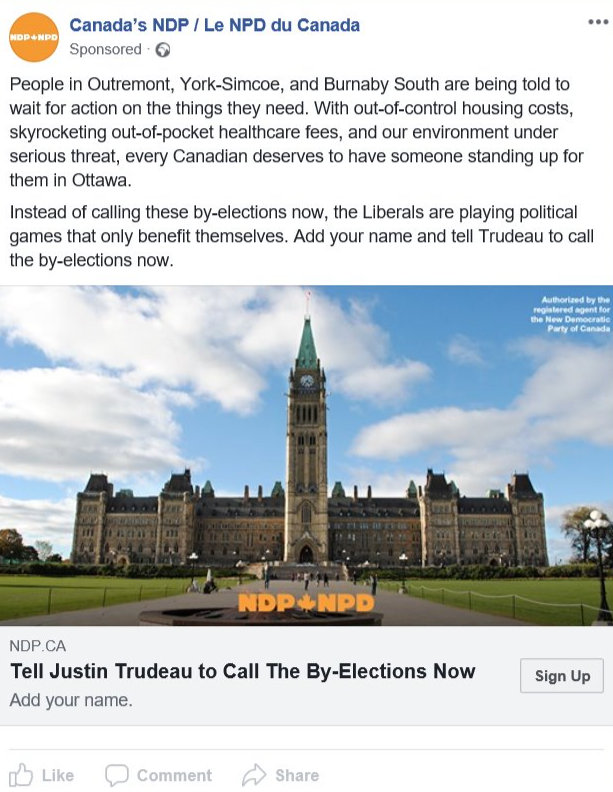 If the NDP ad team is smart, they will be using location targeting to target these ads specifically at the ridings they have mentioned, in an effort to gain support when by-elections eventually are held. 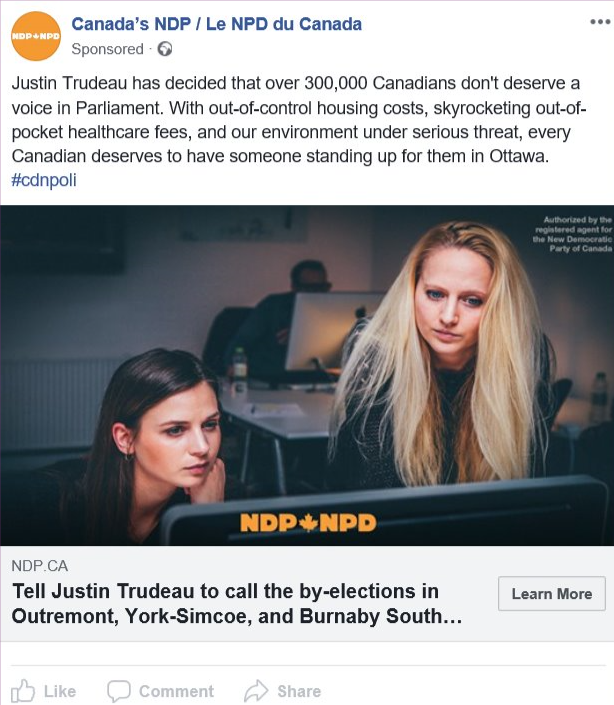 "Justin Trudeau has decided that over 300,000 Canadians don't deserve a voice in Parliament."

This is strong messaging from the NDP, and should resonate with those living in the ridings that are currently lacking representation. 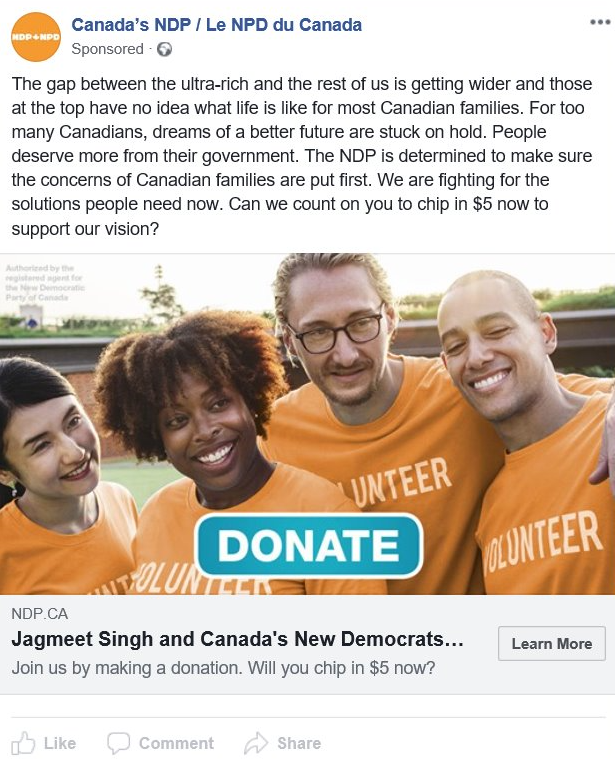 The NDP have also introduced a new fundraising ad this week, this time focusing on income inequality.

Asking to chip in $5 is one of the most effective ways to get people to actually donate.

Again, the NDP are the only party running true fundraising ads on Facebook, as the Liberal ads simply ask users to "learn more" about their victory fund.

All of the parties do the majority of their online fundraising through email.