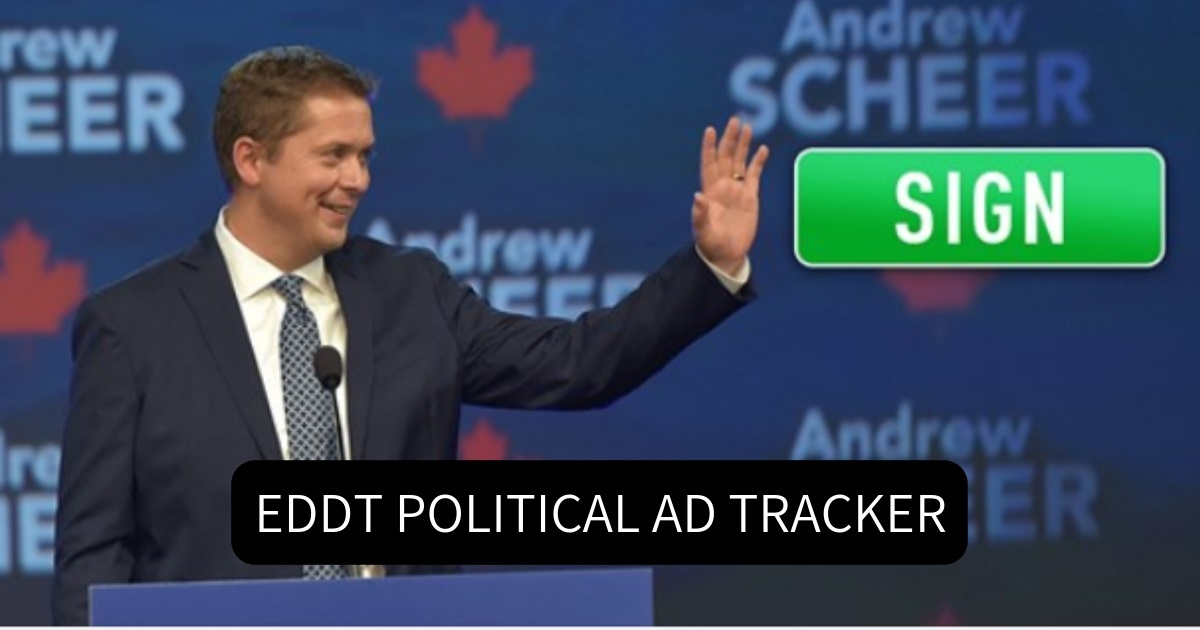 This week, the Liberal Party has started to generate hype for an upcoming campaign merchandise launch, while continuing with their simple sign up ads.

The Conservatives are back on the offensive, attacking Trudeau on the carbon tax and political correctness.

And the NDP are exclusively running simple sign up ads.

It is also worth noting the Conservatives are the only major party not running any of their ads in French.

The Liberals are the first party to begin advertising their campaign merchandise on Facebook.

They're hoping to determine which designs are most popular, while generating hype for the shirts before they go on sale. 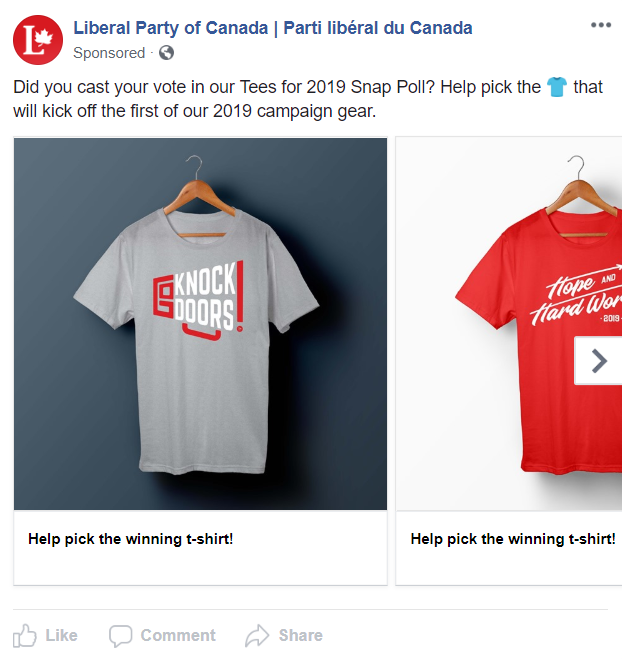 Note the wording in the ad above, referring to their tee-shirt vote as a "Snap Poll."

Are they hinting at something, or merely poking fun at the early election rumors? 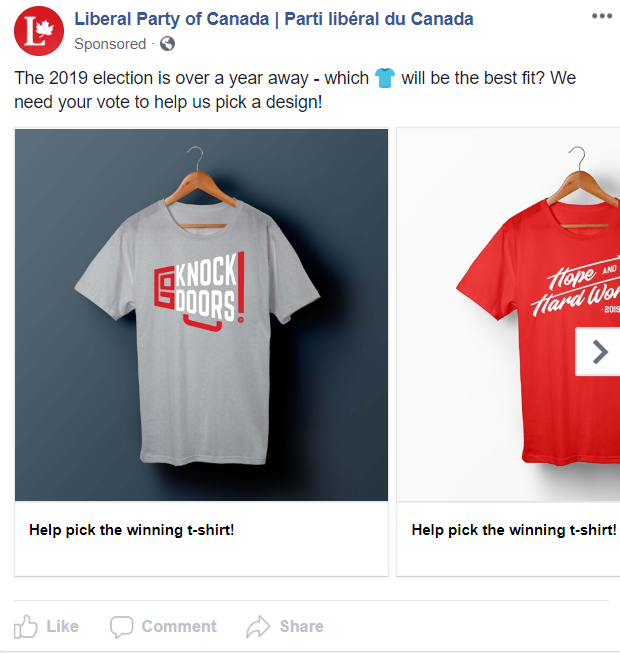 Not the greatest way to convey urgency or generate excitement around your merchandise.

Are the Liberals more interested in subtly dismissing the idea that they might call a snap election? 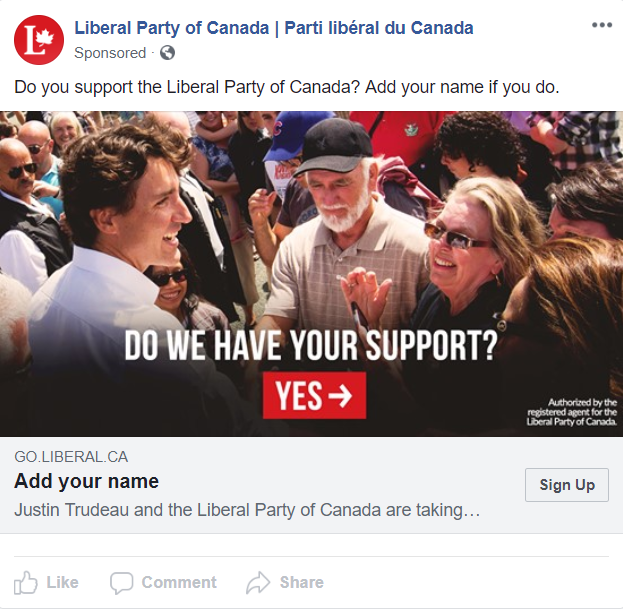 The Liberals also continue to run with their simple sign up ads. All of the major parties are currently running this format right now, because it is simple and effective.

These ads are a great way to build an email list for your supporter base.

It's back on the offensive for the Conservative Party, as they are running ads attacking Trudeau on the carbon tax, and on political correctness.

In addition to their attack ads, they are also continuing with simple sign up ads, early election fundraising ads, and video endorsement ads, giving them the most diverse ad portfolio among the major parties this week.

However, still no French language advertisements. 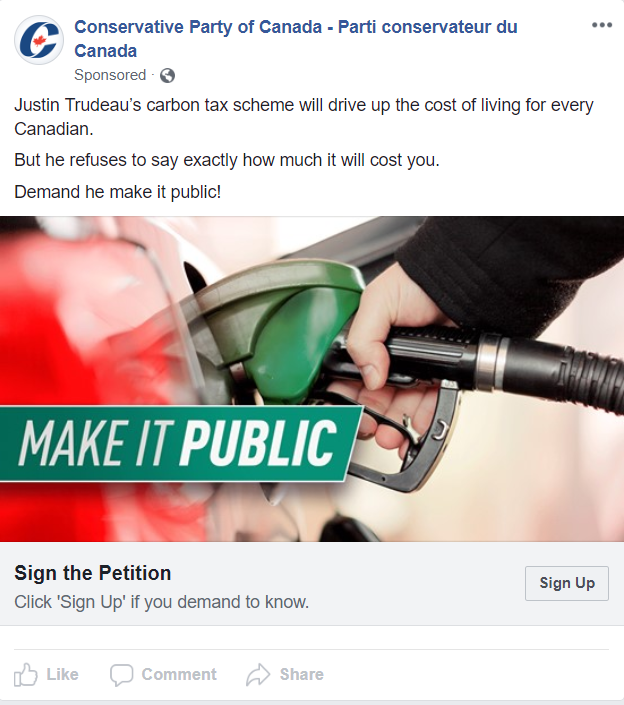 The Conservative Party has revived their "Make it Public" carbon tax petition ad.

Those who sign up can be effectively retargeted with anti-carbon tax ads and emails in the future. 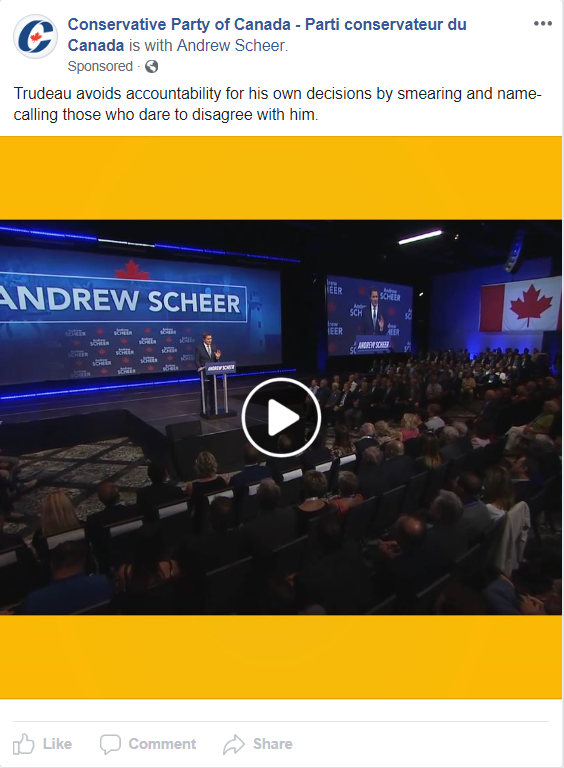 The second attack ad this week comes in the form of a video, calling out Justin Trudeau on political correctness.

As we've mentioned in the past, video ads are most effective when they are roughly 30 seconds long - any longer and you risk losing a large portion of your potential audience.

Previous Conservative video ads have been well over a minute long, so at 47 seconds this is a major improvement.

I'm not sure how to feel about the bright yellow border, but it certainly grabs your attention. 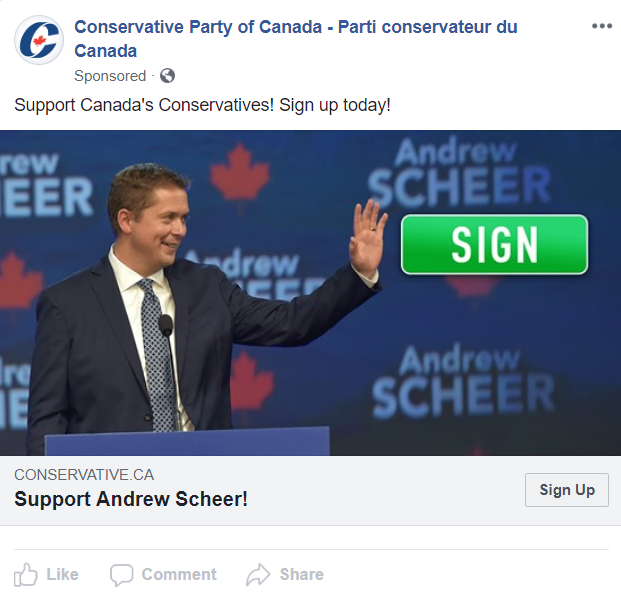 The Conservative take on the simple sign up ad type. 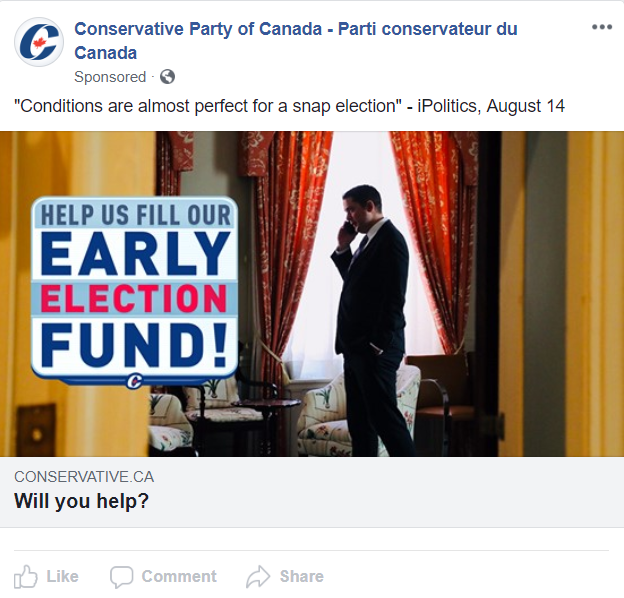 While the Liberals may be poking fun at the idea of a snap election, that is not stopping the Conservatives from capitalizing on the chance to stir up a sense of urgency with their early election fundraising campaign.

However, the article they are referring to in this ad is now a month old. It may be time to freshen up this ad. 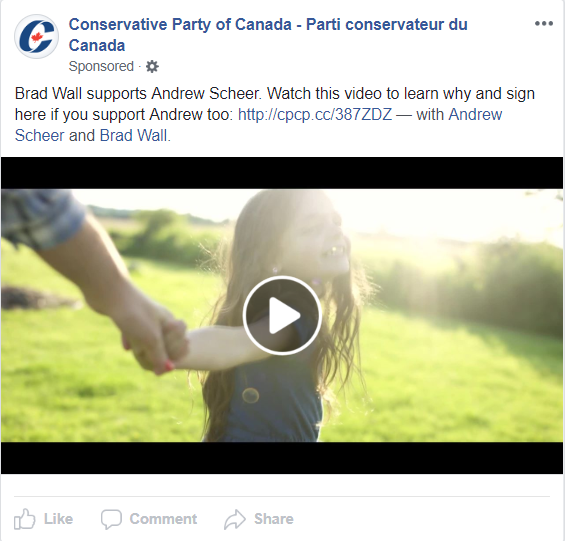 Video endorsement ads are a great way to show support and unity within the party.

But the video clocks in at roughly 1 minute and 30 seconds in length - most viewers simply won't stick around that long.

Fortunately for this ad, the simplicity of the ad text is effective, and conveys the message: Brad Wall supports Andrew Scheer - here is why - sign up if you support Andrew too.

Even if viewers don't watch the whole video, they should still get the message.

All of the NDP advertisements are of the "simple sign up" variety this week.

This may seem lazy but these ads are very effective at getting your audience to subscribe to your email list.

It is also worth noting that if you follow through and subscribe, you are redirected to a donation landing page, so these simple sign up ads may also be helping to move people through the marketing funnel drive fundraising dollars.

The NDP are the only party with this type of setup currently in place. 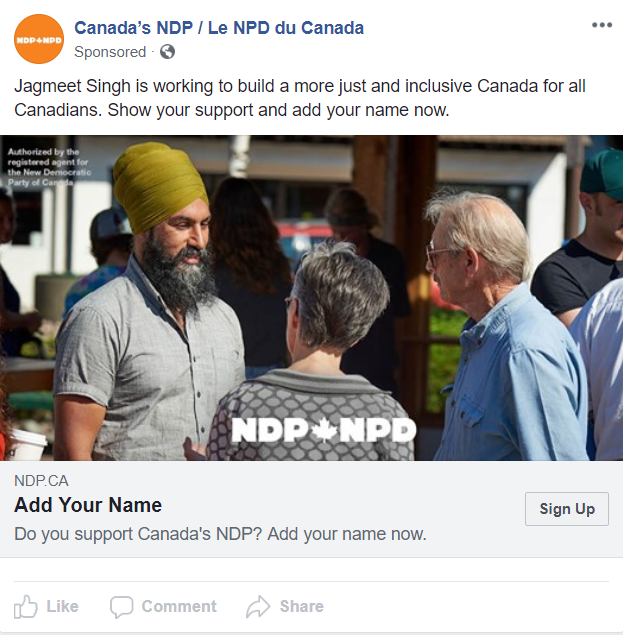 A simple sign up ad with an appeal for a just and inclusive Canada. 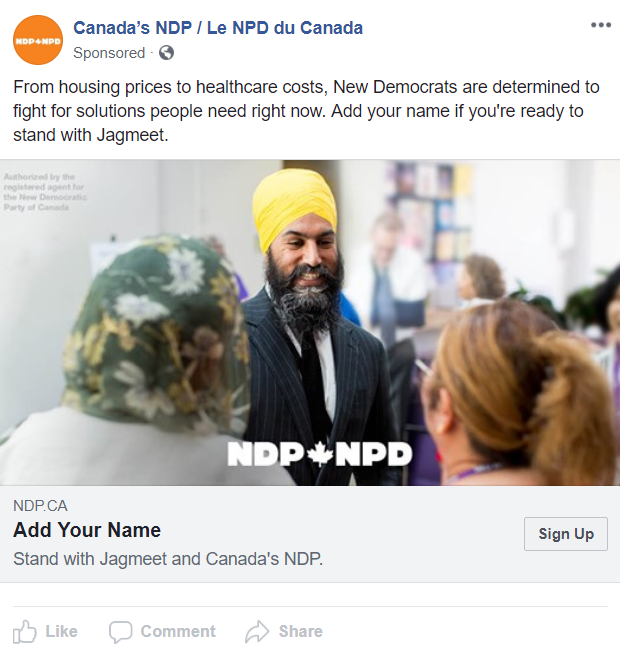 A simple sign up ad with a focus on housing and healthcare costs. 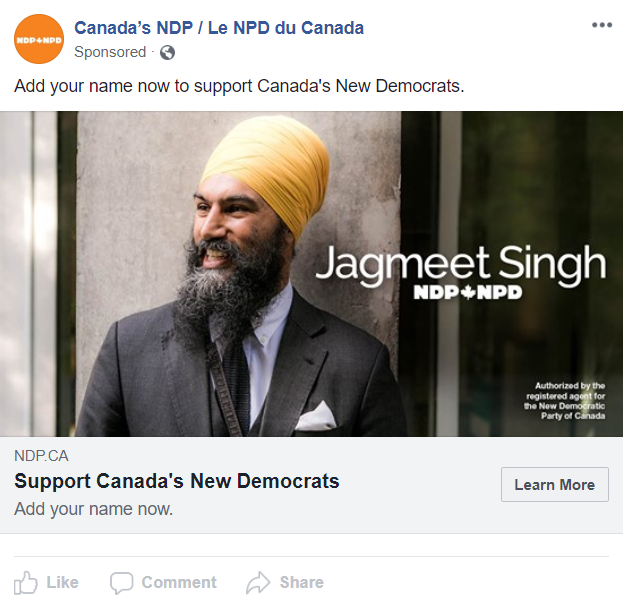 And a simple sign up ad that simply says add your name now.

It is obvious that the NDP priority with Facebook advertising is to build their email list right now.

Simple sign up ads are one of the easiest and most effective ways to do this, but a more diverse ad portfolio would likely have more success.