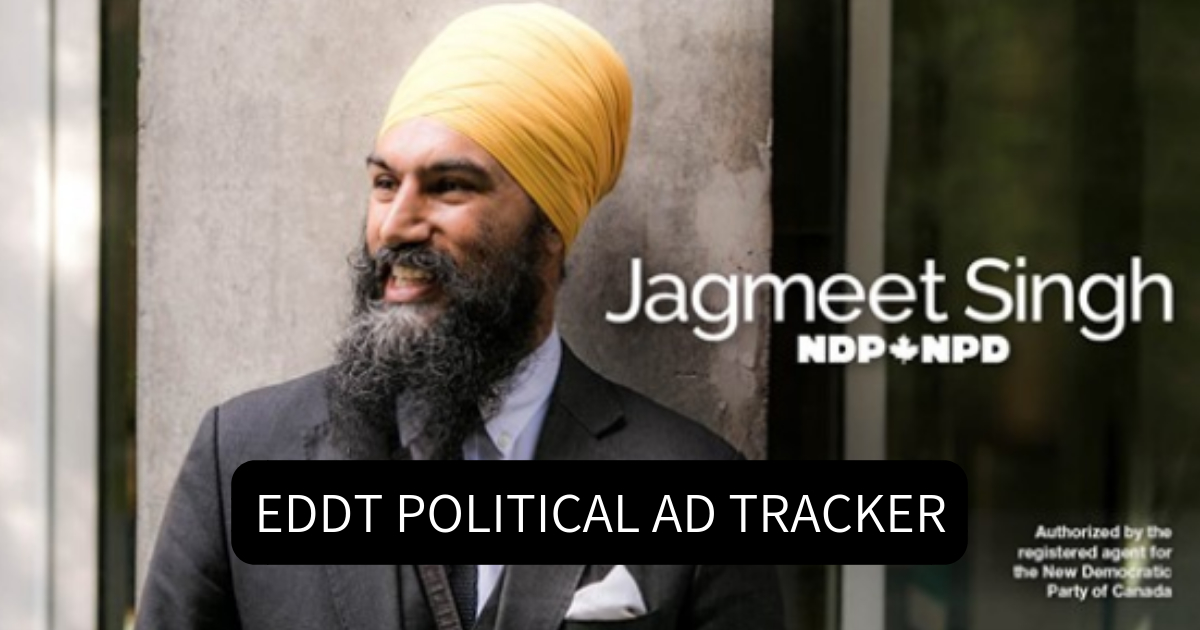 The Conservatives are welcoming Leona Alleslev to the party after she crossed the floor earlier this week.

The Liberal ads have gone stale as they are exclusively running variations on their old simple sign up ads.

And the NDP are running simple sign up ads, as well as a call to donate to the party.

The most notable addition was their video ad welcoming former Liberal Leona Alleslev to the party. 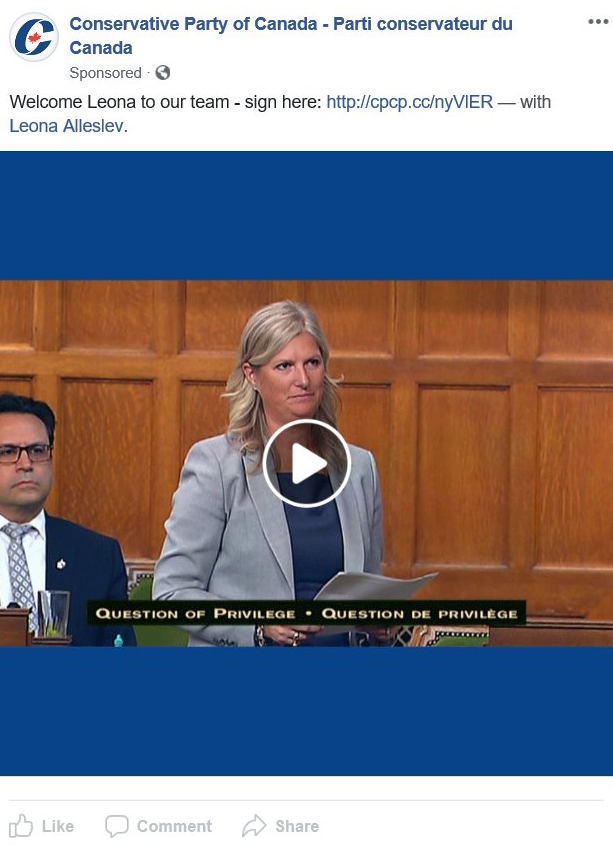 The Conservatives had an opportunity to take a swipe at the Liberals this week after MP Leona Alleslev crossed the floor to join the Conservative Party.

However they may have missed the mark with this video ad.

Clocking in at 6 minutes in length, this video ad is simply too long. It could have been much more engaging if they had spliced the footage to include only 30 seconds to 1 minute of the best footage.

With video ads, you need to engage your audience and get buy-in within the first 5-10 seconds, and offer something of value to keep them engaged for the remainder of the video.

This ad simply fails to do that, an unfortunate missed opportunity for the Conservative Party. 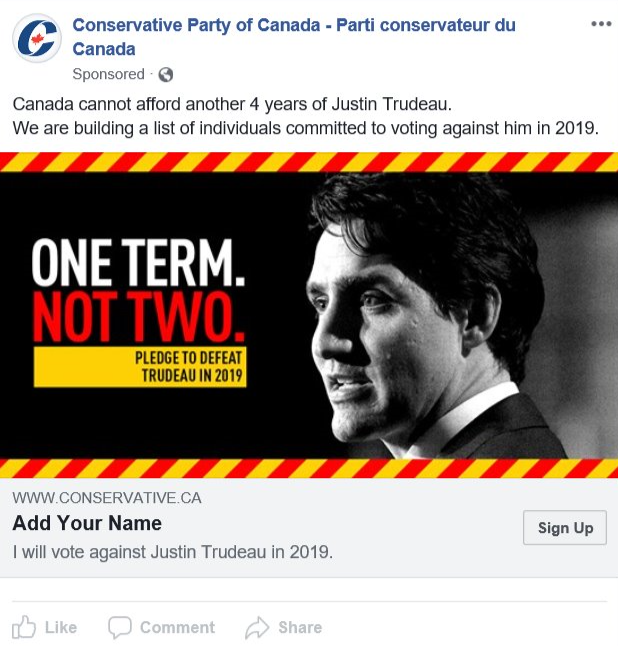 This is a simple, effective ad that attacks current PM Trudeau and mobilizes Conservative supporters to rally against him in 2019. 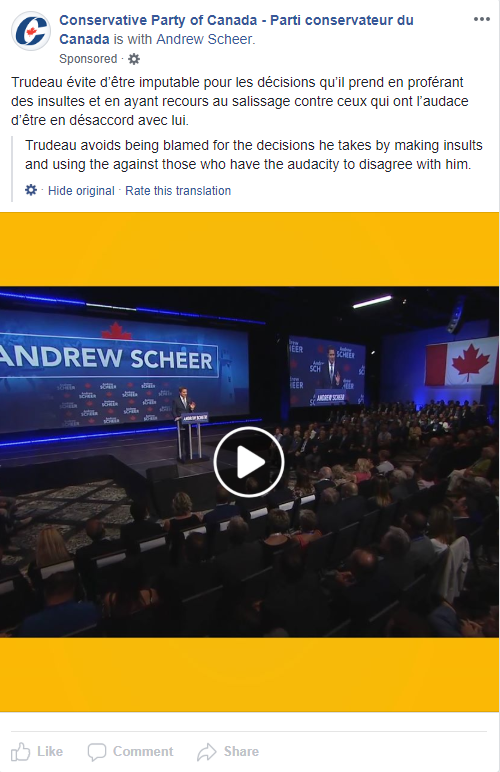 This is the same video ad we saw last week from the Conservative Party, now translated with French subtitles.

At 42 seconds in length, it is still a little long, but a vast improvement over previous lengthy Conservative video ads.

The ad attacks Trudeau on his use of political correctness to insult his opponents.

The Conservatives still aren't running as many French ads as the Liberals or NDP, but this is a good start.

The Liberals are exclusively running simple sign up ads this week, focused on building their email list.

They have recycled the same old ads we have seen in the past with some new text. 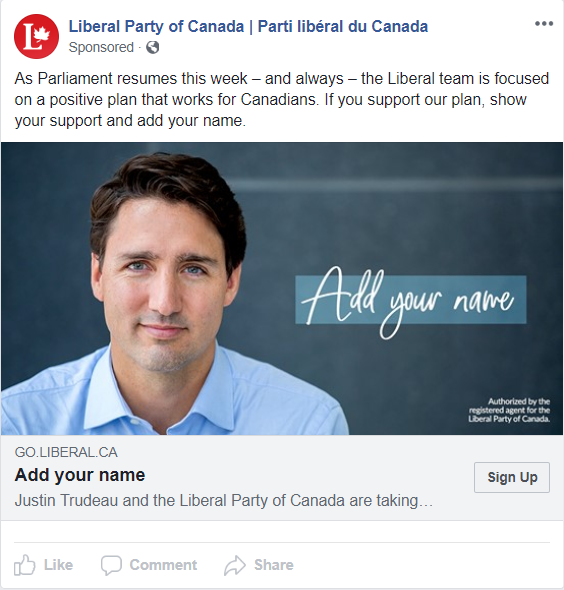 This ad reminds us that parliament is resuming, and that the Liberals are focused on positivity. 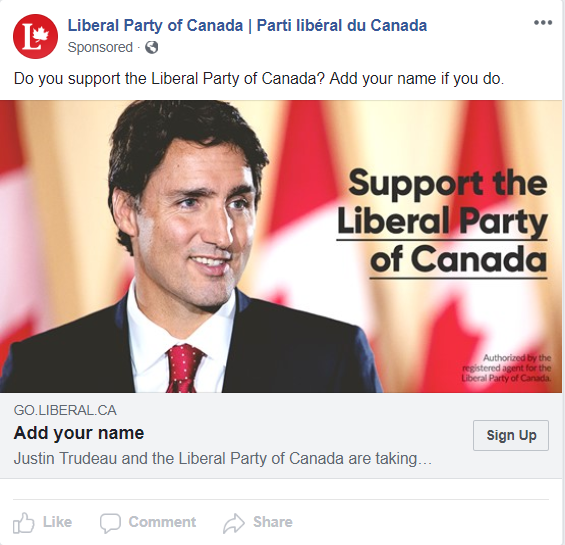 Another simple sign up that has been running for awhile now.

These ads are effective, but run the same ones for too long and it can actually have a negative effect, as viewers get tired of seeing the same ads over and over again.

It may be time for the Liberal Party to freshen up these ads. Something as simple as a new background image could make a big difference for them. 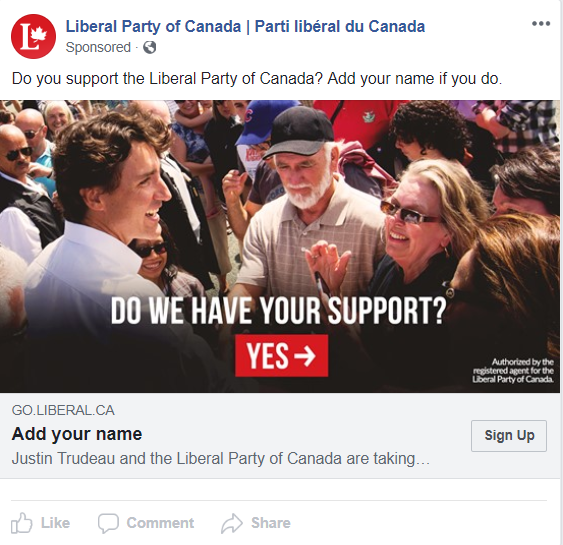 18 ads using the same format and the same 4 images we have seen before.

Perhaps it is working, but I suspect they would have more success running a more diverse ad campaign.

The NDP are also sticking with their simple sign up ads, running 13 variations of these ads this week. They are also running a policy based donation ad in English and French. 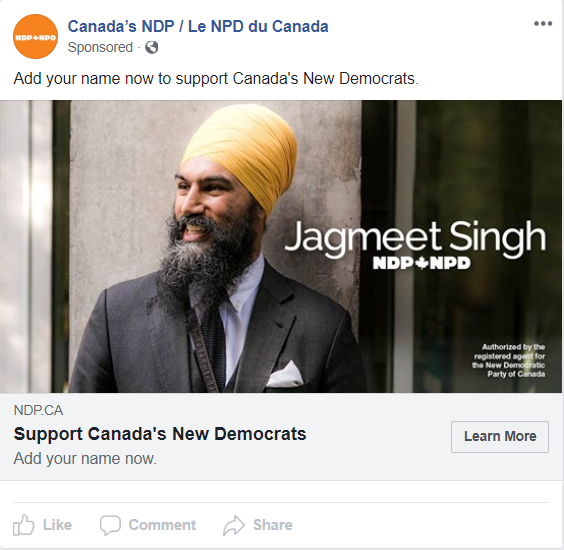 As simple as it gets. 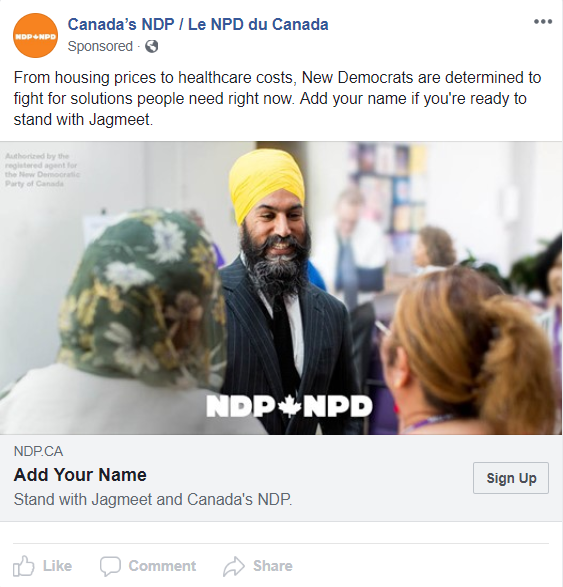 Another simple sign up ad featuring a smiling Jagmeet Singh, with ad copy focused on housing prices and healthcare costs.

The NDP continue to present themselves as the party of the working class as they seek to grow their email list. 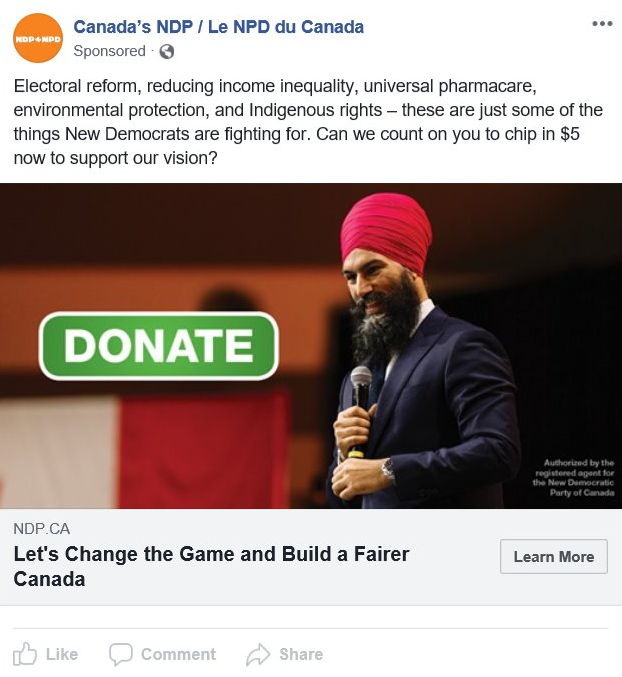 The NDP have run this ad before, and it is a good example of an effective donation ad.

They only ask you to chip in $5, which is a good way to initially convert supporters into donors.

Getting buy-in with a small donation now may lead to bigger donations in the future.