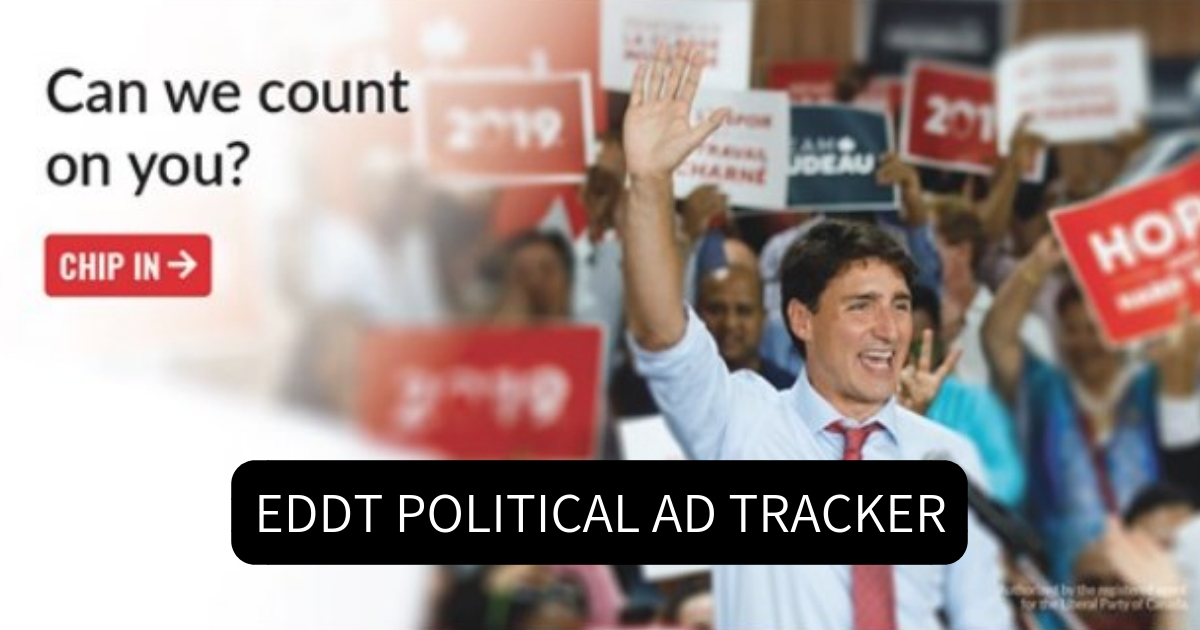 After a slow week last week, things are heating up!

The Conservative ad team has been busy, rolling out location based ads targeting Liberal MPs in 20 rural ridings.

The Liberals have unveiled new fundraising ads and a new tee shirt.

And the NDP have abandoned their simple sign up ads and are now exclusively running donation ads.

Are these effective strategies from the major parties?

Once again the Conservative Party is running the most diverse Facebook ad campaign this week. They continue to run simple sign up ads, petition ads, donation based ads, and attack ads.

They are also the only party running video ads, ranging from endorsements from prominent Conservatives to attacks on Justin Trudeau.

Most interesting this week are their new location-based ads targeting 20 Liberal MPs in rural ridings who voted for Bill C-71. 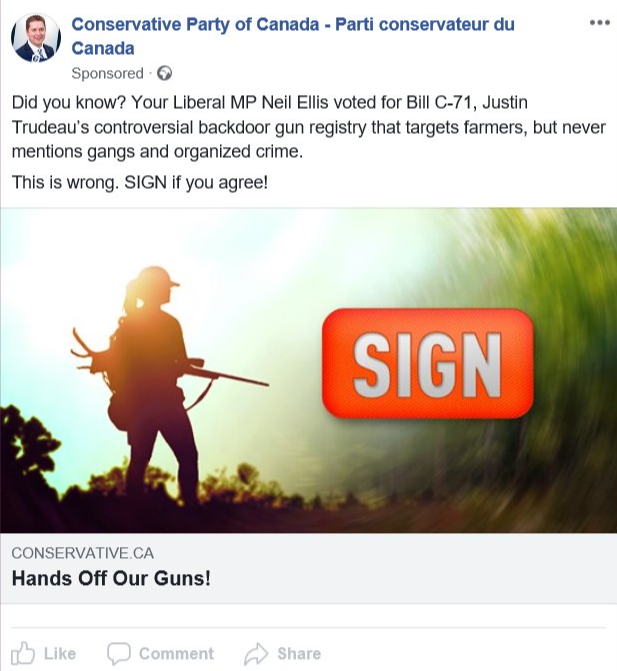 The Conservatives are running 20 versions of this ad targeting 20 Liberal MPs in rural ridings.

Location based ads like this can be very effective, as they feel more personalized to the target audience.

Clearly the Conservatives feel they can gain traction on this issue in rural ridings and they are hoping to take some of these seats from the Liberals in the 2019 election. 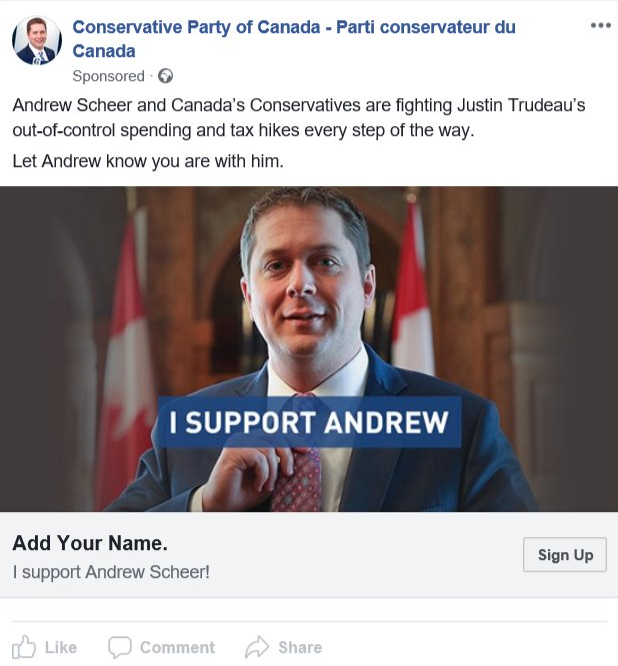 The Conservatives have also rolled out a new simple sign up ad this week.

Targeting Trudeau on excessive spending and taxation, issues that appeal to the heart of the Conservative base.

We have said it before, and we will say it again: simple sign up ads are one of the most effective ways to build your supporter list. 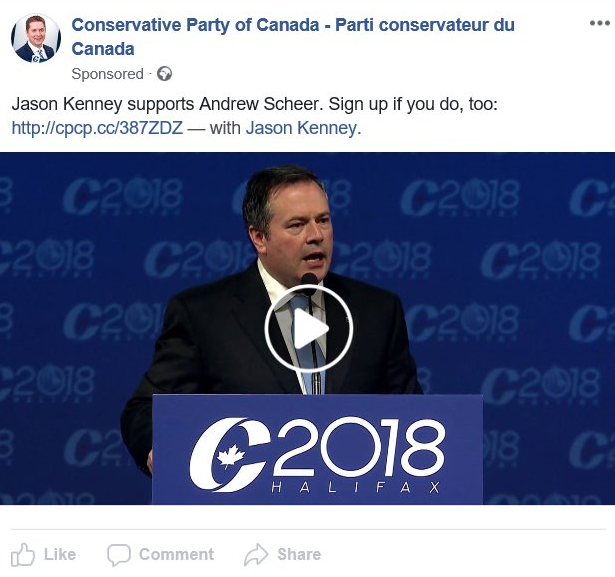 The Conservatives are still the only party running video ads, which is shocking.

Video advertisements have high engagement on Facebook, and should be a part of a successful ad campaign.

However, the vast majority of video ads being run by the Conservatives are quite lengthy, leading to decreased engagement.

As a rule of thumb, video ads should be 30 seconds - 1 minute in length. They must engage your audience and get buy-in within the first 5-10 seconds, and offer something of value to keep them engaged for the remainder of the video.

The Liberals continue to run the same old simple sign up ads. They are effective but a refresh is likely overdue.

However, they do have a new addition to their ad campaign this week in the form of fundraising ads. 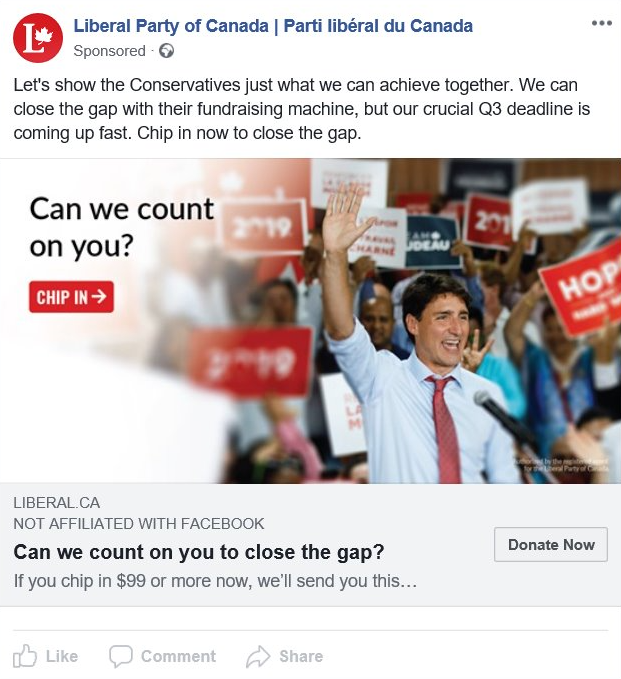 Fundraising ads like this one are effective because they convey a sense of urgency.

Closing the gap with the Conservative fundraising machine, and a "crucial deadline" coming up fast.

They are also incentivizing donations of $99 or more with a free tee shirt. 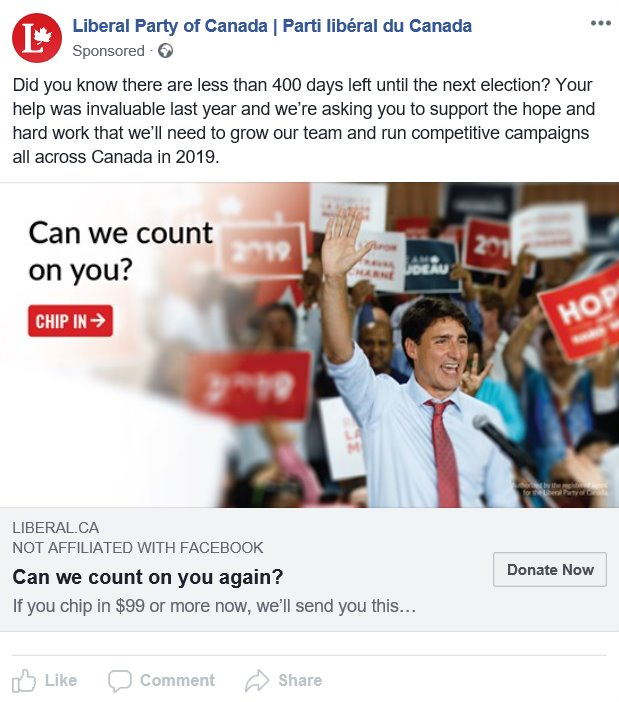 This one may be slightly less effective - 400 days until the election doesn't exactly scream urgency. 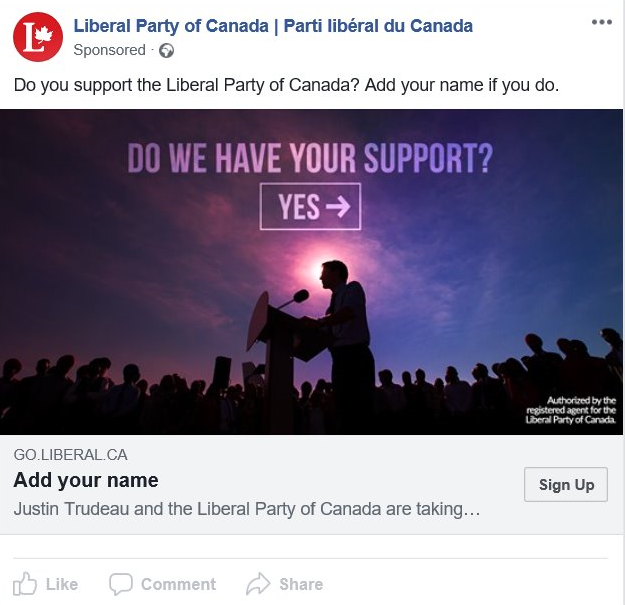 An example of the simple sign up ads the Liberals have been running for a long time now.

These ads are effective, but as we mentioned last week, they can go stale and turn supporters off if they run for too long.

Simply swapping out the background images to provide a new look could increase their effectiveness.

The NDP have overhauled their Facebook ad campaign, abandoning simple sign up ads and doubling down on fundraising ads.

They may be testing the waters to see which version of the ad performs best, as they are all quite similar.

Unfortunately none of them convey a strong sense of urgency, which may hurt their fundraising efforts. 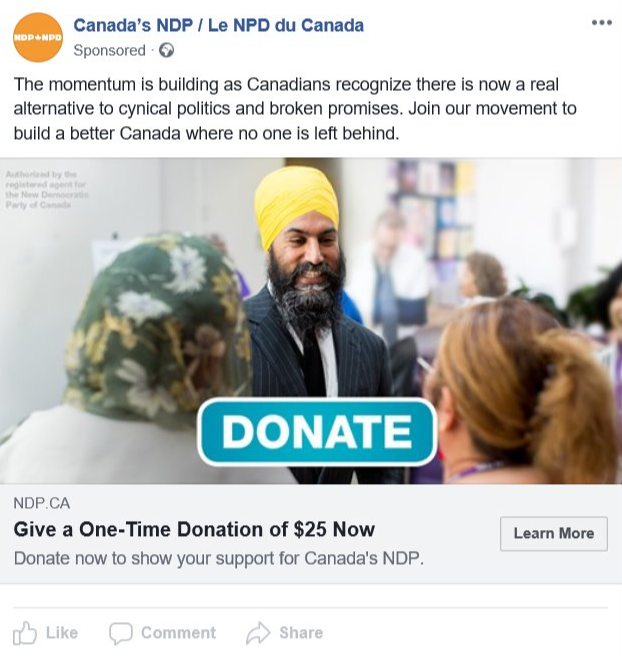 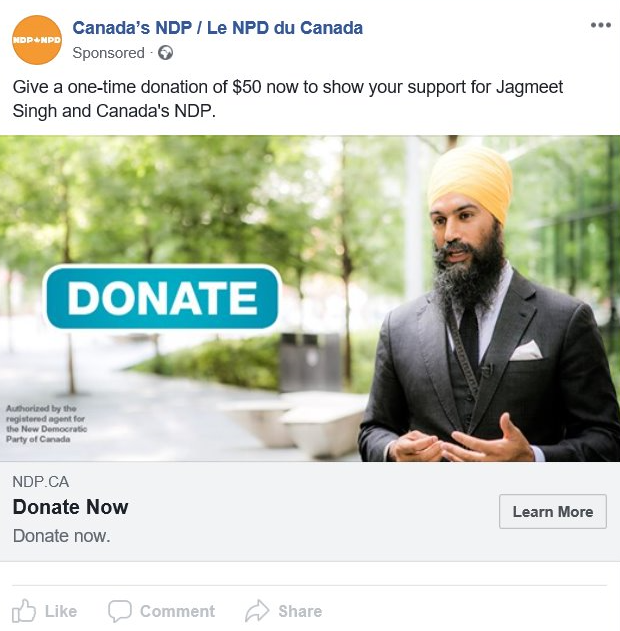 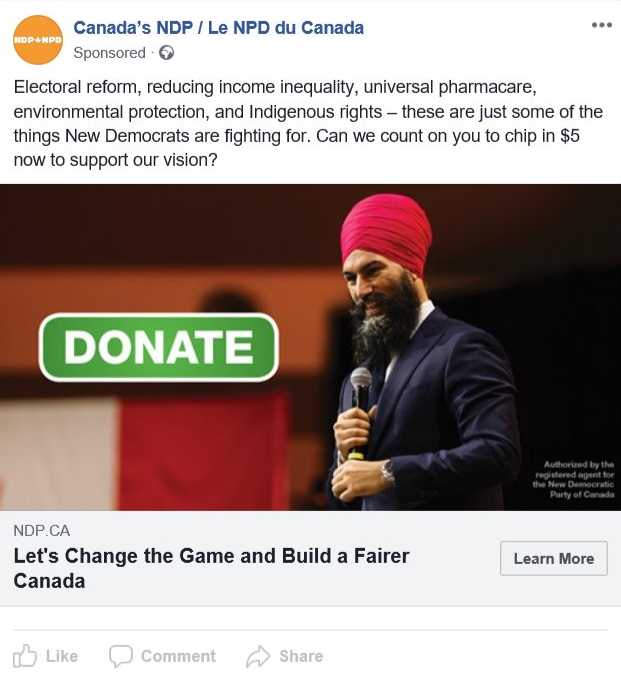 And this ad asks for $5. We are guessing this one will be the most effective.

As we have stated before, getting buy-in with a small donation now may lead to bigger donations in the future.