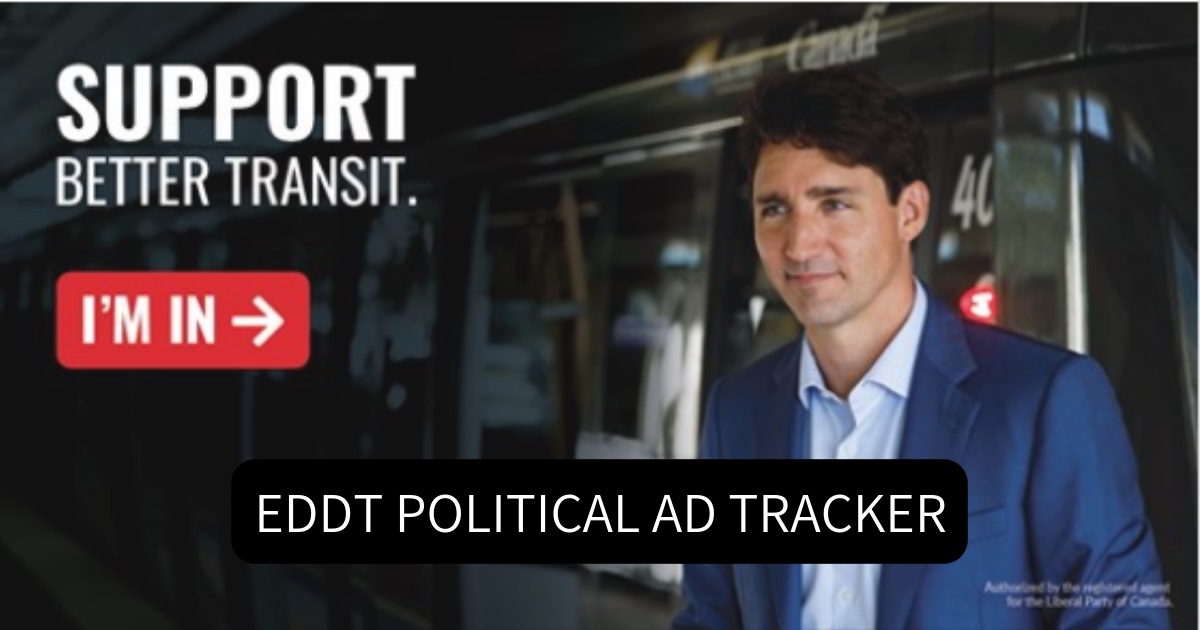 This week, the Liberals are pushing their commitment to transit in British Columbia and continuing to run simple sign-up ads.

And the NDP are focusing on a call for universal pharmacare.

The Liberal Party continues to run several variations of their simple sign-up ads.

These ads are an effective way to build your email list. 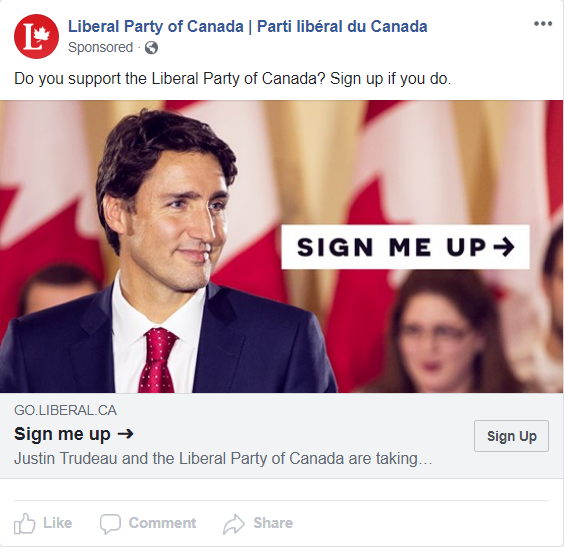 Assuming they are using location-targeting, this is a smart tactic that may help improve their standing in the province.

With an important by-election on the horizon against NDP leader Jagmeet Singh, the Liberals are likely trying to build their supporters list in the Lower Mainland. 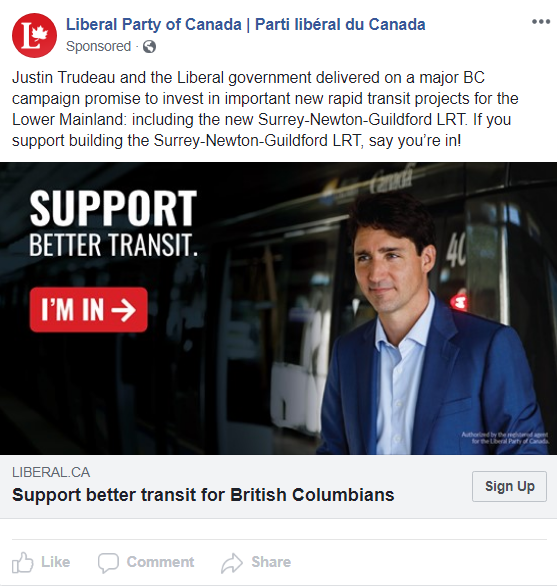 There are 3 varieties of Facebook Ads being run by the Conservative Party at the moment:

Video endorsements are being used to show support for leader Andrew Scheer.

Fundraising ads are running to build an "Early Election Fund."

And a petition ad is running to appeal to hunters and combat a return of the long-gun registry. 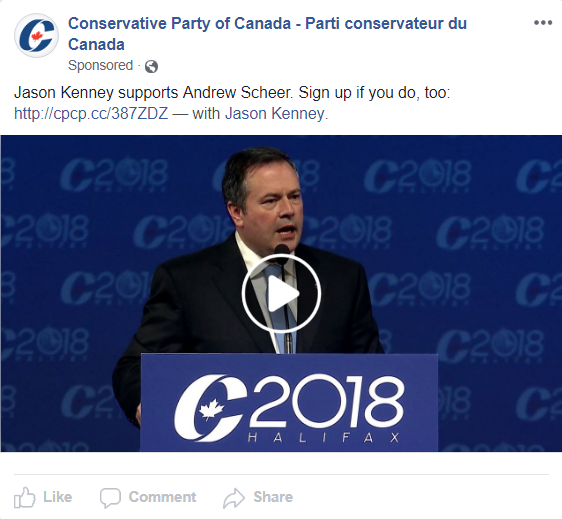 Video ads can be very effective, and statements of support from the likes of Jason Kenney and Brad Wall should help with party unity.

However, all of the current video ads are over 1 minute in length. The video above is 2 minutes long.

Video ads are most effective when they are short and sweet - any longer than 30 seconds and you run the risk of losing a large percentage of potential viewers. 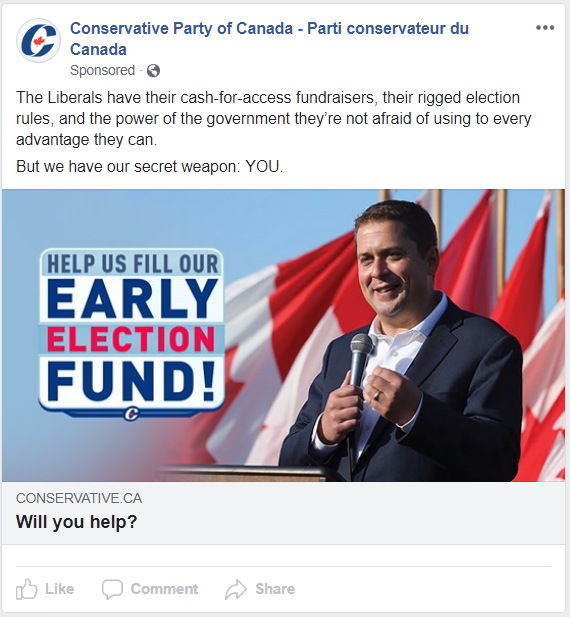 This fundraising ad attempts to empower the Conservative voter to stand up against Liberal corruption.

The calls to action are "Help us fill our early election fund!" and "Will you help?" 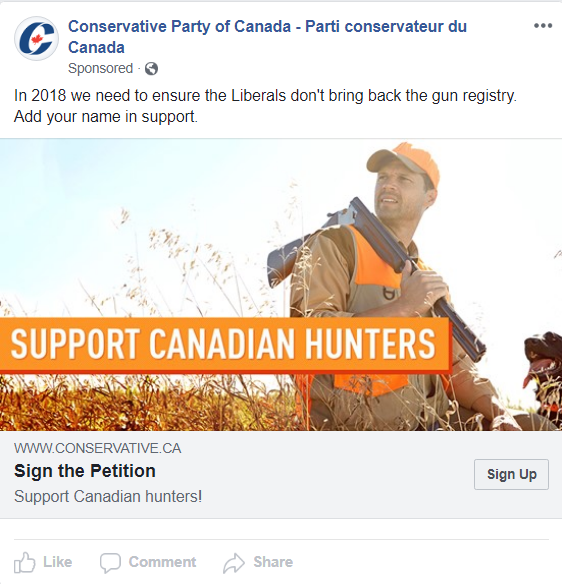 This ad shows support for Canadian hunters while building an email list through use of a petition.

Those who sign can be retargeted in the future with more anti-gun registry advertising.

These ads work, and they help to segment your supporter base into useful target audiences.

The NDP are currently focusing on policy and fundraising.

They are promoting universal pharmacare, and running policy based fundraising ads. 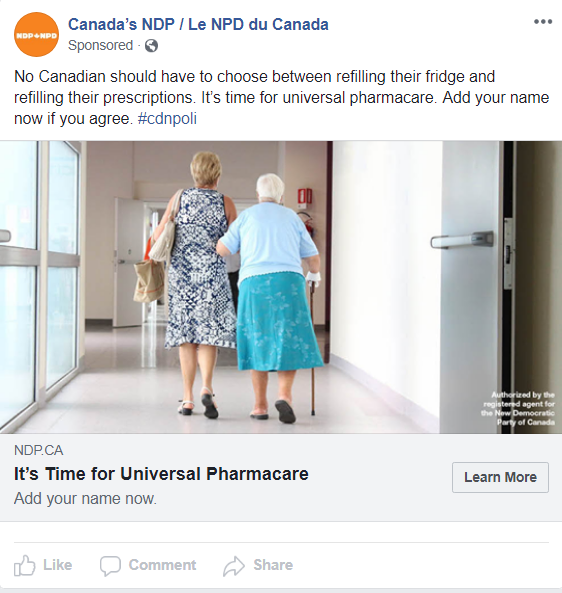 This ad shows that the NDP wants to support seniors and their families who are struggling to pay for pharmacare.

It also helps them build their email list and segment supporters who care about this issue for future retargeting. 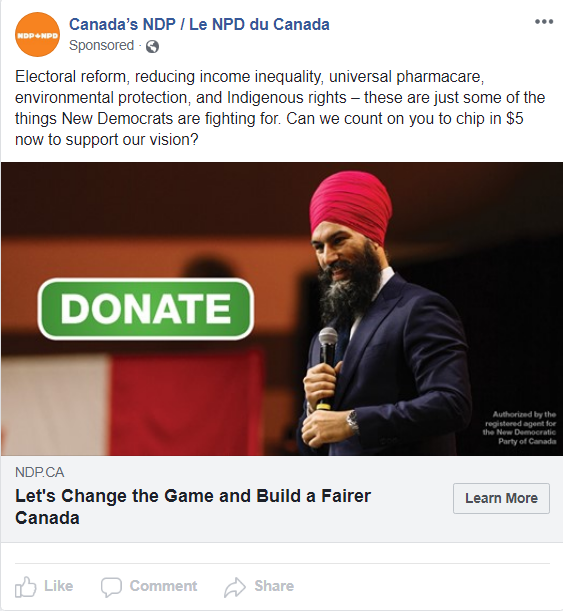 Recognizing the effectiveness of many small donations, they only ask you to chip in $5.

Getting buy-in with a small contribution now may lead to bigger contributions in the future.