The Mississauga–Lakeshore by-election is tonight, so the team at testerdigital looked into how our political parties have been advertising online, using the best resource we have available: The Meta Ads Library.

The results were shocking for a competitive by-election — here's what we found:

The Conservatives aren't spending any money on Facebook or Instagram ads promoting their candidate — a huge question mark after watching Pierre Poilievre’s leadership campaign use ads and social media to sign up hundreds of thousands of new Conservative members.

But there is a faceless third-party — “Proud to be Canadian” — spending thousands to attack the Liberals and encourage voters to support the Conservatives.

The Liberals are spending big money on digital ads — a professional, sophisticated ad buy targeted at identifying voters and getting out the vote today.

And the NDP? They aren't even pretending — they've spent less than $100 on ads for this by-election.

Keep reading to get our full breakdown of the parties and their digital advertising efforts!

Conservative candidate Ron Chhinzer isn't running any Facebook ads. In fact, he doesn't even have a Facebook page to run ads from!

The party is so committed to not running Facebook or Instagram ads in the byelection that they're actively excluding the Mississauga postal codes that are included in the riding from their national ad campaigns. This has likely been done specifically to prevent any of their other advertising efforts from counting against their by-election spend.

The party has been aggressively spending on other advertisements — about $10,726 on 161 different ads over the last 30 days — so we know they understand the power of digital advertising and they are serious about using it to grow their party and brand.

But we find it very odd they aren't spending any money in this by-election.

Let's compare that to the Liberal ad strategy:

The Liberals are splitting their ads between their Liberal Party of Canada page and candidate Charles Sousa's page.

The ads themselves are standard: focusing on the Liberals record in office, introducing Charles Sousa, or encouraging people to get out and vote: 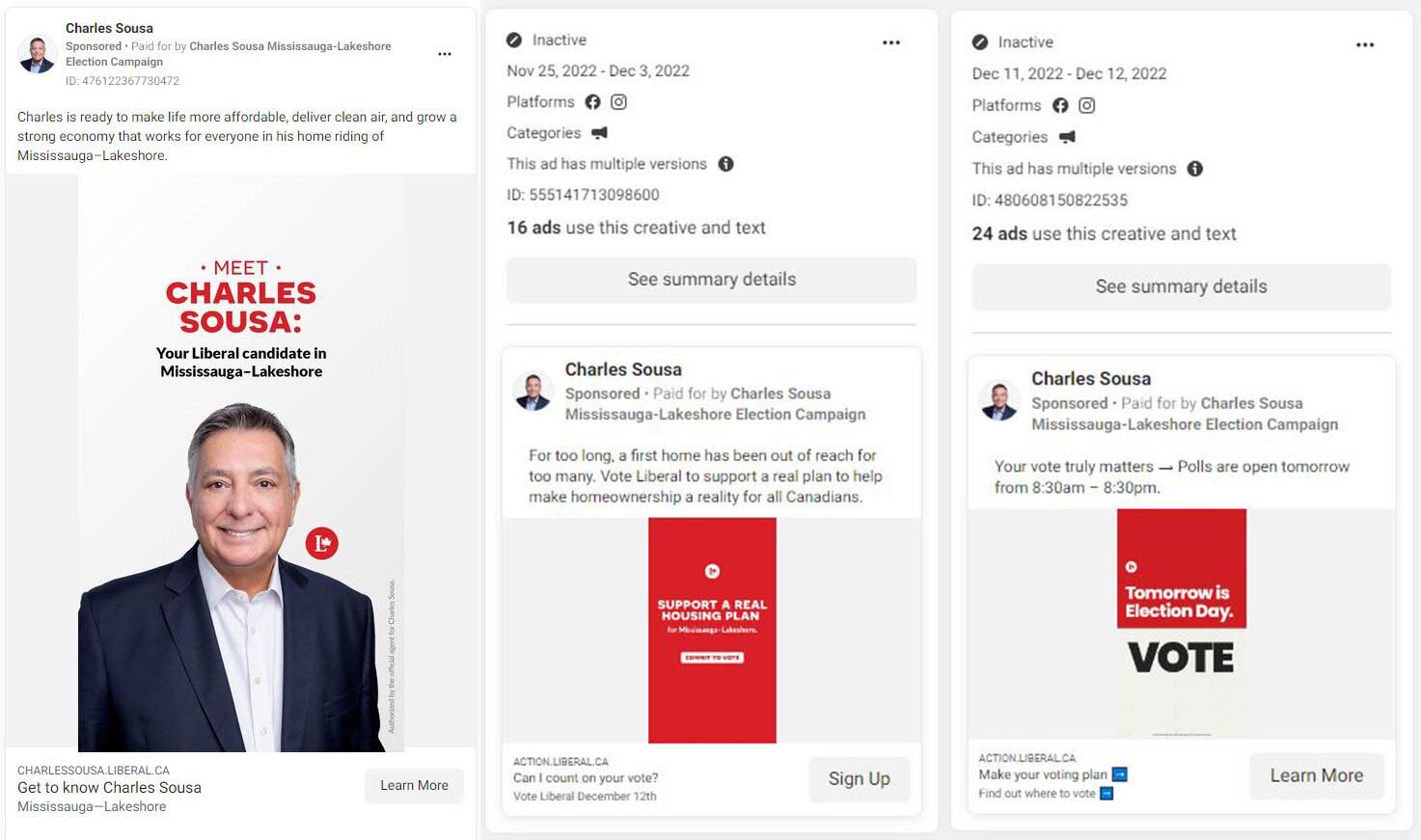 Charles Sousa's ads are similar, though it's interesting to look at his timeline.

His campaign initially spent all their ad money on introductory ads to Charles Sousa, then ran some policy and voter ID ads, and in the last week focused on Get-Out-The-Vote ads. A clear progression that mirrors a standard ad funnel: Introduction, consideration, conversion.

The other piece that's interesting is that the ONLY policy ads Sousa ran focused on housing, and they ran 16 ads on it!

With so much focus on the Liberals gun legislation in the news, it's interesting they didn't feel confident enough to campaign on it in the GTA!

Facebook is showing us more ad information than ever before, and this was new to us. They show us what percentage of ads are using custom audiences for targeting or exclusion. The Liberals, for instance, are excluding audiences from every ad - presumably identified non-supporters, so as to not waste money. They're also targeting lists about 25% of the time. The Conservatives are also using lists for similar purposes.

NDP Candidate Julia Kole appears to have spent less than $100 on a single ad, targeted Canada-wide. 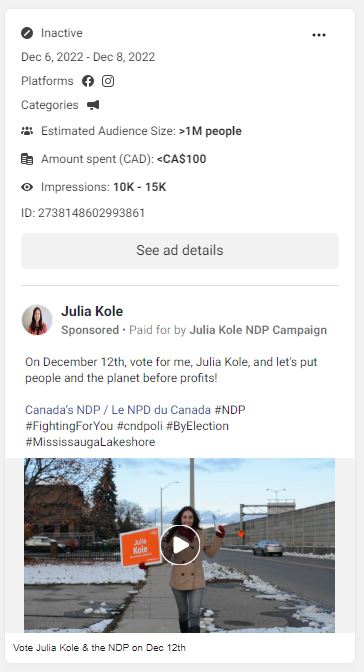 Nationally, the party is running 7 ads Canada wide, none related to the byelection.

A third party group, "Proud to be Canadian", has spent over $4000 on ads in Mississauga-Lakeshore. Filings with Elections Canada filings the group is run by Chris Carlile of Calgary, a former political staffer. 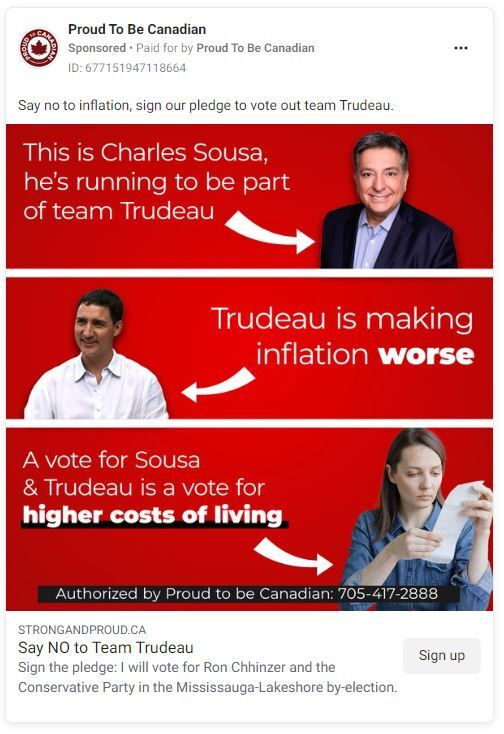 Proud to be Canadian is registered with Elections Canada, so these ads are totally legal. But you would have no idea who this group was or what they were about without doing some digging.

They do not appear to be affiliated with "Canada Proud" or "Ontario Proud", but they seem to have the same business model. Their social media feed is almost entirely memes designed to generate likes and shares for their page, with political content sprinkled in to make it seem more authentic.